21. I have road tripped around Ireland with my sister, kissed the Blarney stone and climbed to the edge of the Cliffs of Moher to look down and see birds flying below me.

23. I always wanted to open up a wrapped box from under the tree, Christmas morning, to find a little puppy inside.

24. I have set-lists, been backstage in the green room, and have been to after parties with Wilco.

25. I was taken to urgent care after being bitten by a blind and toothless, old dog when I was in middle school.

26. I don’t like bananas, but I don’t mind fake banana flavored candy.

27. I have a Bachelor’s degree in Art, not a Fine Art degree. Before graduating I was an undecided major, then an education major with Art emphasis, then an Art Education Major, then just an Art major.

28. For that I had to take 2 years of Italian language classes.

28. If I had a fine art degree it probably would have been in printmaking, photography, or metalwork/jewelry. I just counted 12 classes I took between those subjects.

29. I have 10,100 songs in my itunes library and if each track played once my library would play continuously for 26.5 days.

30. I would say97% of those songs are from CDs. I don’t believe in buying digital. Why pay almost the same amount of money and not get a hard back up as well as awesome artwork?

31. I’ve had a thing for stripes (particularly black and white stripes) probably since middle school. It makes me kind of sad now how popular B&W stripes are now. It used to be fairly difficult to find b&w striped items and everyone around me knows it was my thing. Now I don’t want people thinking I’m just being obnoxiously trendy.

32. I don’t like pop and rarely drink it. I can’t take the carbonation. It hurts to drink.

33. I have green eyes and I think that makes me special.

34. I have bought my current bicycle 4 times. 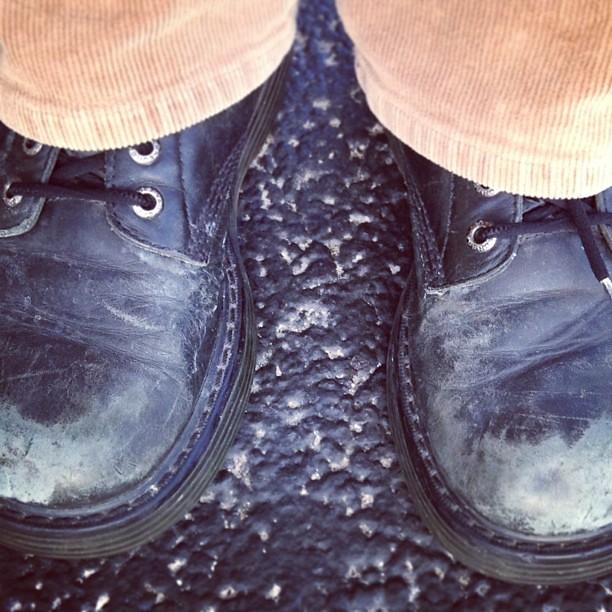 36. Here are my favorite boots. Click the image above to read more about them.

37. I have sent HUNDREDS of pieces of my original artwork though the mail.

39. The first page of all my sketchbooks start out the same way with the time of my birth printed small and central, and nothing else.

40. I’m worried that these lists of 100 Things sound like I’m bragging or a snob.