Back on a couple of my previous blogs (2001, 2003) I shared 100 things about me posts. Somewhere I actually have that list written out on paper. I’ve often thought how I’d like to share a list like that here on this blog, but I also know 100 items is a lot of things to expect a reader to go through. So, I’ve decided to break it up into bite sized posts, 20 items at a time. Read the complete 100 Things About Me in parts I, II, III, IV, and V

1. My name is Robyn Rachel Wells and my parents got my name from a recently aired episode of Welcome Back Kotter.

2. I started working as a graphic designer professionally when I was 16 years old, as part of a selective internship in high school.

3. My boyfriend Matt and I have been together since 2001.

4. I’ve been friends with my best friend since kindergarten.

7. I went away to summer camp twice when I was in middle school.

8. The sound, feeling and even sight of styrofoam drives me crazy.

9. I live one block away from the house that I grew up in.

11. When I was a senior in high school I took my spring break in Juneau, Alaska.

12. I have never been on a cruise, and don’t care to ever go on one either.

14. I had a pet hedgehog named Heddie. 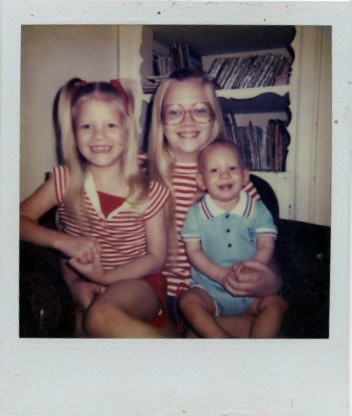 15. I have always had a thing for Polaroid cameras and instant films. That’s me with the pigtails, probably spring-ish 1982.

18. I haven’t had a car for several years now, but before that I’ve had 3 cars, all of them grandma oldsmobiles that I drove until they DIED.

20. I work in the same office now that I worked in as a 16 year old. It’s a different business, but the same building, and there have been other jobs and locations in between. Funny enough, my computer is actually positioned on the same wall as my light table was on back in the day.