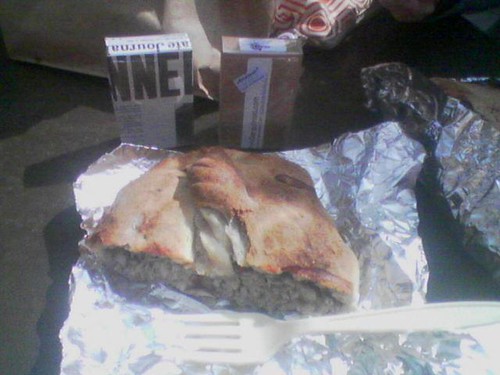 This weekend should be called Road Trip Weekend.

On Saturday my sister and I drove up to Madison, WI, in our bajillionth attempt to get cornish pasty from Teddy Wedgers in Madison. We used to get them when we were kids, remembered them fondly and wanted to see if they were as good as we reminisced. We’ve gone up before, only to find that they were closed. Another attempt we did end up getting pasties, but from another place entirely, and they weren’t as good as we hoped. What is Cornish Pasty, you might be wondering? Well, if I remember correctly, they were a regional pocket dish cooked for the working miners, cooked early, and kept warm in pockets till lunch time. Imagine a pie crust filled with meat, potatoes and veggies. It’s kind of like a calzone, but less bready, more pie crusty goodness. yummmm. I can cross off an item on my 2010 list of things to do.

The drive up was about 2 hours and I called beforehand to make sure they were open. When we got there the guy told behind the counter told us they just sold out of the traditional (meat and potatoes) pasty about 15 minutes ago. We were crushed. But then he explained if we REALLY wanted some they would have some done cooking in about 15 minutes. He acted if that wait was a deal breaker. He did not know how far we had come, lol. While we waited we shopped. I remembered they had an Artomat, so we tracked that down, which led to several AWESOME stores.

Madison is really an awesome town. It’s a beautiful capital city and their downtown shopping around the capital looks so cozy and small town. But the shops, well, they are no sleepy small town shops. The ones we went into were right up my alley. It was like the renegade craft fair in chicago, but in a store. I know renegade has a craft store in chicago, but I’ve never gone in, so I can’t compare it. But the items in these stores were often artists I’ve seen representing themselves at the renegade craft fair and elsewhere in the craft/indie internet world. We stopped in Pop Deluxe, which also had the Artomat, and I bought two pieces (seen in the top picture with the pasty) and a bunch of fun items including a key chain light that looks like a match and is turned on and off by blowing on it. We also stopped in Anthology. This is the kind of store that sells everything from “$1 do it yourself button badges” to finished altered art books, japanese stationery, and it looks like they also offer crafty classes, as there was a table of ladies decorating easter eggs while were in there.

After our delicious lunch we headed back home, but not before an obligatory stop at the Cheese Chalet to pick up cheese, cheese, cheese!

Yesterday morning I did a harmless google search for “Huffy Verona Craigslist” and low and behold I found someone selling my old bike (that was ruined in the accident last year) 2.5 hours away in Peoria, IL. Some of you might remember that I just purchased my same bike a few weeks ago on Ebay. That was also a huffy verona, but it was the female version in gold. My old bike was the male version in a burgundy color.

I messaged the owner and arranged to pick it up today. This was my first time ever using craigslist so I was a little nervous and knew I really shouldn’t go alone. My sister was the hero today and drove 45 minutes to my house, just to take me 2.5 more hours to Peoria to pick up the bike. This was a LOT of driving for her this weekend and anyone else in my life would have just called me insane.

On the way down I was thinking how this would actually be the FOURTH! Huffy Verona bike I have officially owned. That is a testament to this bike. The first one was when my “to-be” sister in law and I went to walmart, tested them out and immediately fell in love. This was probably in 1999 or 2000. She bought the girls version in gold and I bought the male one in burgundy. They are just Huffy, so they weren’t expensive, maybe $140. They look and feel like comfort bikes, BUT they have real brakes and speeds, unlike the jamoke “retro” comfort bikes out now, where you have to peddle backwards to brake and there is only one speed – “how fast can you peddle?”. Hello elementary school!

I loved this bike from the beginning because not only was it supremely comfortable, but it also had that retro look, way before that retro look was as popular as it is today. I called it my PeeWee Herman bike. After owning and riding it to work for less than a month, I came home one day, parked it on my parents back yard patio and within probably 15 minutes someone stole it. I was heartbroken. I hadn’t even had time to register it, so if it turned up abandoned somewhere I was out of luck. I went back to Walmart and bought another. This time I was careful to keep it in the garage. This bike stayed with me through 3 moves. At one point a peddle shaft cracked, peddle fell off and it was easily repaired by buying a new shaft. Then while locked up outside at my apartment, some idiot stole my bike seat, also easily replaced. Then the other peddle cracked off, but this one meant the whole gear mechanism needed to be replaced. It was taken to the bike shop to get fixed.

Last year I set myself a goal that I would walk or ride my bike to work for a month. After the first month was up, I was enjoying myself so much I continued on. Halfway through the second month tragedy struck when I was hit by an SUV pulling out of a parking lot and the bike was destroyed. I was equally upset by what felt like a broken ankle, as I was by my precious bike being crumpled. After I took it into the bike shop and they literally laughed at me for proposing it be fixed, I decided I’d find another bike just like it again. They obviously have stopped making them, but since they were sold at Walmart I figure there are probably thousands of them out there between ebay, craigslists, used bike shops, and garage sales across the country.

Bike three showed up on Ebay, but it was the female version. I didn’t care, both bikes were awesome, rode and felt the same. The only difference I can tell is the color and the standard higher male bar on the body. Bike three is great, works fine, if just a touch rusty.

This weekend bike four occurred through craigslist. Now, even if something were to happen to one my bikes, I’ve got a back up. Meanwhile, my sister in law is still on her first bike :)

It was a great weekend. Sunny, perfectly spring and a lot of miles covered.