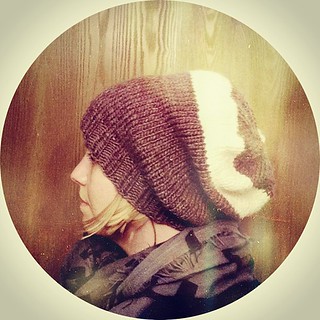 My sister in law mentioned that she would like a slouchy knit hat. For Christmas I bought a yarn in a color she likes and knit her a hat. When I knit I’m not the type of person to follow patterns, I make stuff up as I go. I don’t do swatches and I rarely follow suggestions for needle sizes. I like it that way because the things I make are my own, BUT it also causes some grief and a lot of ripping out and frogging. I knit the hat for my sister in law and I actually decided to buy a pattern beforehand. BUT the yarn was chunky and the needles I had on hand were 3 sizes too big. I shoudn’t have been surprised when the hat turned out to also be about 3 times too big as well!

Take two, I had her pick a worsted weight yarn she liked and borrowed the correct needles from my sister and it turned out great. Who knew? I liked it so much that I decided to make one for myself. The hat I made for myself was a chunkier yarn so it’s a bit big, but it still fits and looks great.

This winter has been a weird one, more rain than snow. I love spring, but I need a good long hard winter before I can fully appreciate and feel all the awesome inspiration and energy from spring. Yesterday in the chicagoland area we finally had a good snow. I went home for lunch and the snow was falling in big clumps. What was supposed to be less than an inch turned out to be at least a couple inches. I went home for lunch and then didn’t want to go back to work, so I called work, told them I was sick (hack, hack) and couldn’t come back. I was joking and my manager knew but said I could have the afternoon off. I have truthfully NEVER called in sick or skipped work or school by pretending I was sick. Anyway I stayed home, and watched the snow fall and made the above little video on Vine. It took me a while to figure out how to embed it here on wordpress but I finally got it. Unfortunately, it’s not showing up in google reader. If you wanna see it, please just visit the original post.

After Matt got off of work we had to run to the grocery store to pick up some ingredients for dinner and the snow was still falling. As we pulled into the parking lot I had a brief moment of worry that the store would be packed with those “BREAD AND MILK SNOW STORM!” people. It wasn’t packed, but I still had to laugh when Matt found and sent me this hilarious video this morning.

Edit: Just thought of one more thing that I wanted to add to this post of wintery things. A few weeks ago my brother, sister and I took my little nephew to Russell Woods for a winter event they were having. We took a winter hike, rode on a horse drawn wagon, and we pulled candles. The candles pictured were some children that were making their own. We had a good time and look forward to going to back to the woods during the spring.