Last week was my sister’s birthday. Happy Birthday Chris! I hope you had a great birthday and will have an AMAZING year ahead! She has always been a supporter of my artwork and is ALWAYS there for me when I need help, or an opinion and guidance.

For her birthday she wanted to go to the Museum of Science and Industry. It was an awesome day. I haven’t been there since I was in elementary school and could have spent a couple days there before reaching everything they have to offer.

Unexpectedly, I was also able to (semi) cross off two items on my To-Do-List for 2010. At the MSI now, your tickets to get in become a “sci-pass” where you can record the activities you participate in and then access them online later. They had a sound booth that was similar to the storycorp idea, where you could go in and interview other people. I went in and recorded a short interview with my sister, which was one part of number 23 on my list.

Number 12 on my to-do list was to get an old-timey picture done. In my mind, that meant REAL old photograph techniques, like daguerreotypes, as mentioned in a few posts ago, rather than some quick digital pics that have been converted to grayscale or sepia tone. That being said…  MSI had a photo studio set up where you can take quick digital old-timey pics in an old car, so we played. 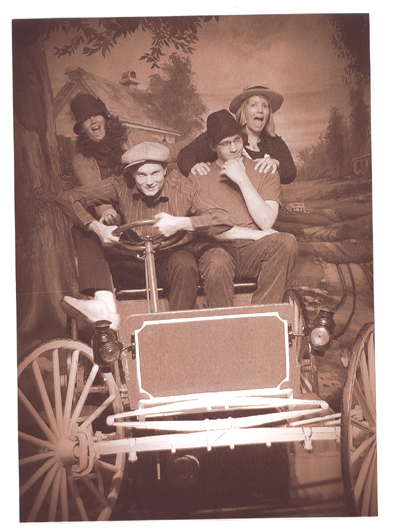 I’m the one in the back with the straw hat on, my sister is next to me and my brother in front of me, and his friend Chad next to him. The portrait woman was cracking up at Chad’s leg sticking out. 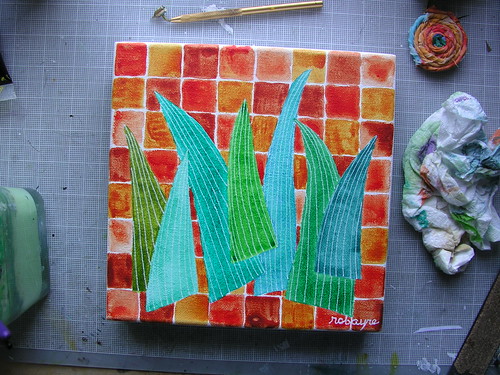 I have some art to share, as usual. This was the fourth grass painting in the series. I know I always say it, but it has to be said again. I LOVED this painting. It has a watercolor look to it, but it’s acrylic on canvas. It went to my sister for her birthday. I also made her the brooch in the above picture (orange and aqua at the top right). 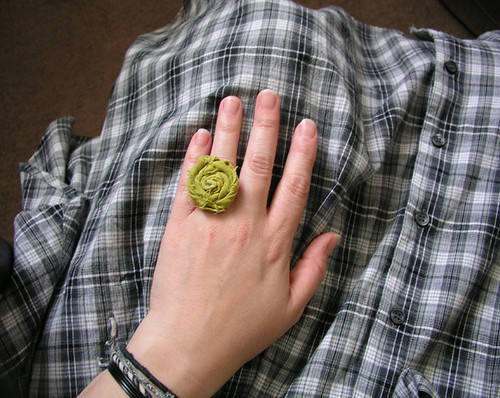 I also made her a ring, and then made this one for myself. I used this tutorial  from Makeitdo, that I found through the craft blog.

2 thoughts on “A special day”