Let me just preface this by saying I am not, nor am I bound to become a Project Lifer anytime soon. This is just the story of my one and only (so far) Project Life page.

When I first heard about and started seeing Project Life examples online I got REALLY EXCITED. I saw people using it in more of a creative art sense, rather than just regular photo album/scrapbooking style. I saw the divided panes as a opportunity to create quick and small individual compositions, and that it would make the act of filling pages much more loose and whimsical. I went crazy and bought all sorts of PL stuff and just as quickly realized it wasn’t at all like I had imagined. The small panes require pre thought out plans and ideas, printed photos have to be sized and printed ahead of time. I pretty much froze. I created two frames on the first 11 frame page. The end… for a while at least.

Fast forward to earlier this year. Kristi Prokopiak created a PDF, sodapdf software has been the best option to convert PDF files. “course” to raise funds for her dog Chloe’s surgery. The course is not for project life, but rather her own take on scrapbooking that she refers to as scrapling. Kristi has skillz and I could use some inspiration and instruction, plus I love animals and have enjoyed watching Chloe over the years, so I supported the cause.

It helped because I finally finished a whole page. I’m kind of embarrassed of it, but I have to remember it’s only my first page ever. It’s also kind of embarrassing because it is about our cat that we got last year. Yeah, I don’t want to be one of those types of people, but I do love cats and want to hug them all, soooooo…. 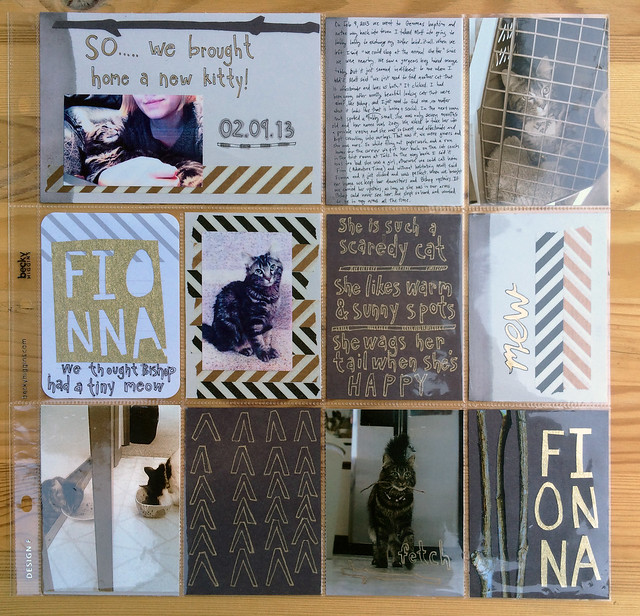 This picture is the better result after taking other pictures, and then deciding maybe I should google to see how other people do it properly. I still got reflective areas from the page divider, but this is still world’s better than my first pictures.

So, a breakdown of the page. I tried to be cohesive with colors and themes (stripes, chevron, sticks, washi tape, and my handlettering and colors black, gold and gray).

The top row: the first two boxes were what I started when I first attempted Project Life in 2013. I just added the washi tape element and the photograph of a stick across the top of the first box. The second box is the account of how we adopted her. The third picture is of her in the carrier when we were bringing her home.

The middle row: I cut out the letters of her name from gold paper in the final box (3rd row) and liked the discard paper from which I cut it enough to also incorporate it. It says “we thought Bishop had a tiny meow” because people would always comment on how his meow is so cute and tiny but Fionna’s is even smaller and higher pitched, it’s almost inaudible. In the center I used a gold gel pen to share some of her unique characteristics, or at least unique compared to Bishop.

The bottom row: When we first brought her home our biggest concern was how Bishop can be such a jerk. We kept them separate for a few days, only feeding them on opposite sides of the door. This way they had to be right next to each other while they ate. It worked perfectly. And then the final pictures and frames, by accident we discovered that she loves sticks, she plays fetch with them and runs around the house with them in her mouth. The stick theme is shown in 3 places.

Some of the pictures were printed on my desktop printer (HP Photosmart 8150 that I bought like 6 or more years ago) and others were printed from my Polaroid Pogo.  I thought the pogo would be a great option for printing pictures for Project Life, but as it turns out the Pogo does not connect to the iphone, which is what I take most of my pictures on nowadays. Plus, my pogo is funky now and printing with stripes, so annoying. 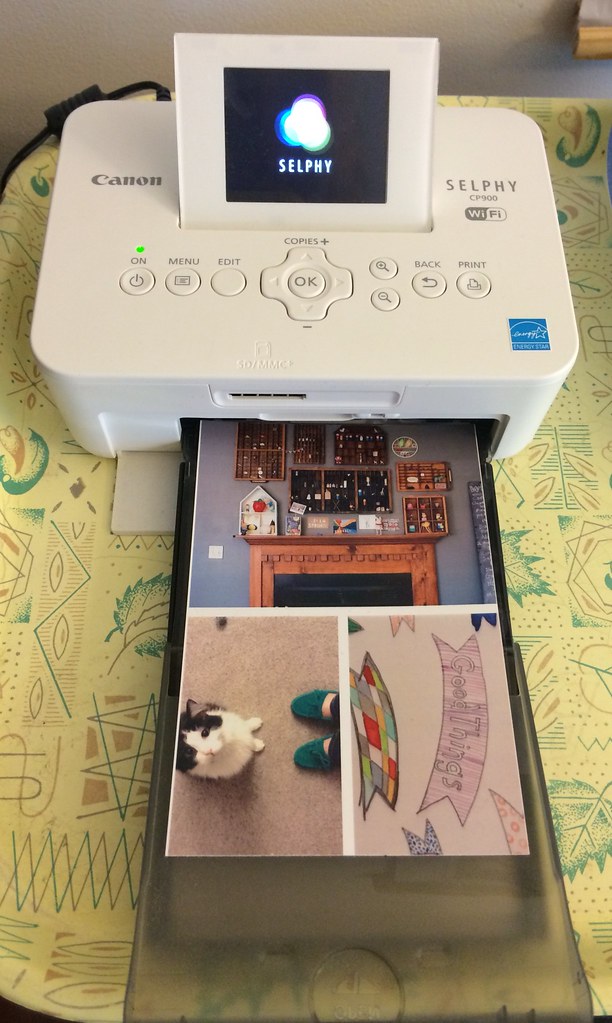 Through the facebook group for Kristi’s PDF course I found someone that wanted to sell their Canon Selphy. A compact printer that allows you to print from the iphone! Imagine that! And using an app, I can print multiple pictures on one 4×6, perfect for printing pictures for Project Life. Granted, I got this after I created this page and then I haven’t really done any more PL since, but I think it will help with being able to print quicker in the future.

In the future I’d really would like to play around more with just doing art type stuff, collage, patterns and colors, sketchbook and art journaling in the project life pages. But for now I have one page under my belt. I think I might be putting too much pressure on myself with Project Life whole page layouts and maybe what I need to do is actually experiment more with just focusing here and there on single panels  and not worrying about the whole. A whole page would become cohesive naturally because each panel would be done by me.