Back in 2009 when I first got that hand me down iphone 3, one of the things I was most excited about was using video apps. Crickets chirping. Yeah, I was rudely awakened by the fact that iphone 3 did not have video capabilities. Flash forward to the beginning of this year and I got my new ipod touch 5 and I finally have video.

One of the first things I did was download the app Glmps, which I had been dying to use. I made this little video with my new record player that I got for Christmas. The app allows you to take pictures and records video and audio for a couple seconds on either edge of the photo. Unfortunately, it was glitchy and buggy and when I went to find out what was up with the app, the facebook page looked like a ghost town, complete with tumbleweeds and I’m sure it has been abandoned. 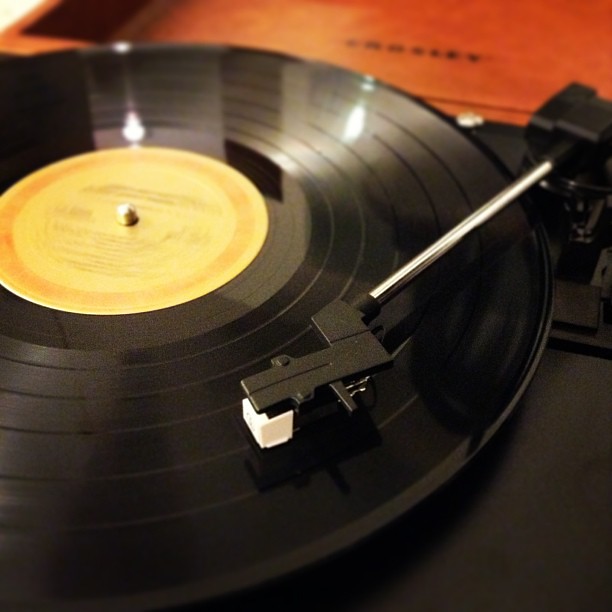 Click on image above and when image loads click on video image in corner and you will see video and hear the record. 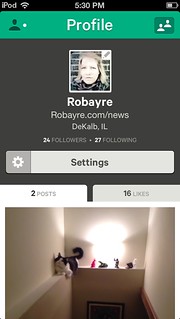 No need to fret though, less than one month later Vine enters stage right. In the span of a day or two my instagram feed blew up with people sharing their Vine accounts. Apparently it is associated with twitter. It’s essentially the same thing, small snippets of video with audio, but it allows you to stop and start again while recording. The limited editing then allows you to change angles or locations, create stop motion, and set a scene.

I’ve made a few videos. Since I used my record player on the first glimps one I thought I would do another for Vine.

Here’s a quick video of Bishop our cat. He always climbs out on this ledge over the stairs. Sometimes when we are downstairs watching TV we will see him all the way out on the ledge watching us.

Then I created another one while I was coloring in the Zine by Silvia Chenault. I was listening to Mumford & Sons and when the album ended I went to publish the video and just then my ipod died. I thought I lost it forever, but I was thrilled to just find that it actually had saved it to my photo album before shutting down. All cut the way it is, it makes the music sound like I’m listening to something being played backwards.

It’s fun to make your own quick videos to share, but it’s also fun to watch other people’s little videos. Amy Johnson of Maker Mama did a post this morning of 10 tips for using Vine.

I’ve seen a few different posts online lately about the importance of video for your online presence. Back in 2010 “create 5 gifs” was on my yearly list of things to do, and you can see them all here. I’ve often thought that I should make a little video for my recycled stationery sets that are in my shop. I think they have an interesting story, how they are made and what they are exactly. I’ve had a few people express to me that they weren’t sure exactly what my recycled stationery sets are and I thought a video might clarify everything. At any rate, I’ll just add that to my mile long list of things to do someday when I have all the time in the world.