Let’s just say that since the accident I’ve been in this weird place (not a bad place, but…) where I’m just not feeling super creative or productive. It probably has more to do with the crazy heat wave that arrived with summer a few days after the accident, more than it does with the accident itself. Lately I’ve spent what would normally be my creative time, reading fashion and weight-loss blogs, gardening, or just watching junk television like my new favorite Man Vs. Food. When I start to feel guilty about not working on artwork, or updating my blog or Etsy shop, I stop and think “This is my life, and I’m under no command to do anything.”  If creating artwork, or blogging or maintaining my Etsy shop begins to feel like a chore, then it will no longer be fun. I love all of those things, so if I keep a looser schedule, then so be it. But of course the moment I stop pushing it, then a balloon of creativity pops!

That being said, last night well past midnight I was fighting sleep. I felt very energetic as I lay in bed with my eyes closed. It was then, that several project ideas came to me. I present the first to you now: 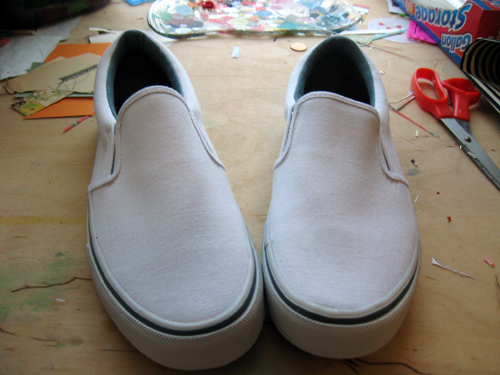 I’ve bought shoes to alter before, but then made the mistake of wearing them before altering them. Then it got to be “I can’t alter these shoes, I love them too much the way they are!” Last night I got the idea to go buy some cheap men’s plain white slip on tennis shoes. I like the men’s because they are wider and don’t have that annoying pointy toe that shoe designers  seem to think women have. Barbie dolls’ shoes have points, but none of my shoes have it because my feet aren’t shaped like Barbie’s. The men’s shoes also have a wider, broader work area, quite like a real canvas, eh?

Like I said above, I’ve been reading “everyday” fashion blogs similar to Wardrobe Remix style blogs, and have been inspired to amp up the paltry thing I would call my wardrobe. I’d like to take more risks, as I usually just stick to a t-shirt and jeans. I sometimes think people keep their personal possessions too safe, meaning they want their items to stay looking as perfect as they did when they first brought them home. When I worked at the middle school, I witnessed countless times where kids would spend their entire study period scrubbing all little marks off their brand new shoes. Every kid seemed to carry around that white shoe sponge stuff that keeps your shoes looking brand new, and it made me sad. Don’t they run and play anymore, because scuffed, dirty and warn in shoes would be a result of playing. I come from a very different view point. I think the more warn in something is, the more loved, the more personality, the more value. Keeping all of our personal possessions in mint condition is bland and boring. What an exciting world it would be if people all had to paint their own cars, oh yeah, that’s what I’m talking ’bout!

Okay, back to the shoes. I love, love, love Campers Twins. Have you heard of these shoes? They are a pair of shoes, that are slightly different from each other, as their slogan states “They’re twins. Not identical but complementary.” I’d someday love to own a pair of campers, but as they are very expensive, that day will probably far away.

I wanted my shoes to be like Campers, different, but still go together, so I got inspiration to make my shoes from multiple different mail art pieces I did, seen above. 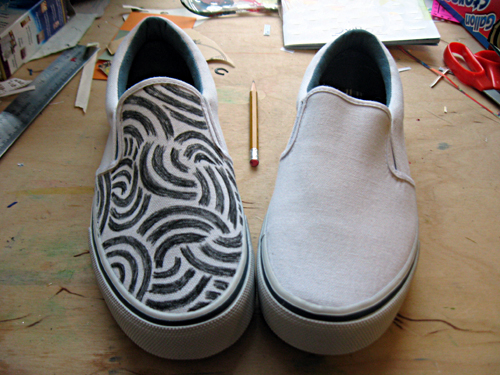 Step one: I just used a regular #2 pencil and drew in design lines. I really liked that and contemplated just doing it to both and call it a day. I decided to go the whole nine yards, and I could always create another pair like that down the road. 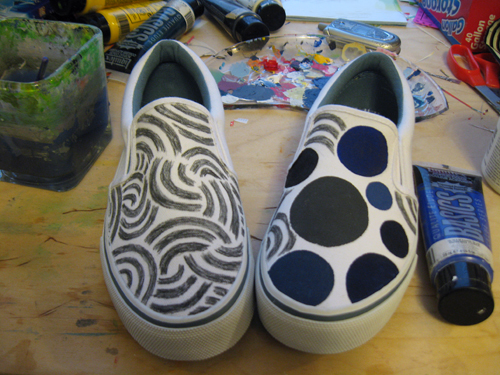 Step two:  I painted freehand circles of varying degrees of blue, black and gray cheap acrylic paint. At this point there’s no going back. Also, you might notice that the second shoe also has penciled design lines so that one could vaguely recognize that the two shoes are indeed part of the same pair. 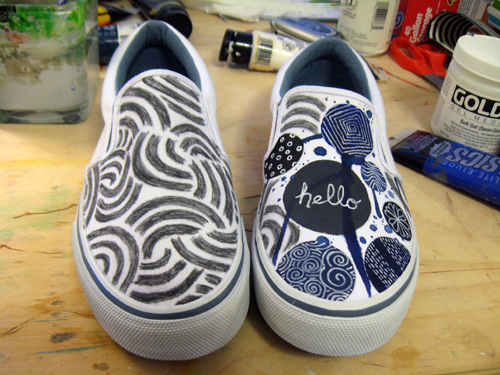 Step three: I used my handy-dandy Kempar fluid drawing pen, that Rosa so kindly sent me years ago. I love that thing! Here’s where the learning curve kicked in. I wanted to add interest by drizzling and splattering the blue paint, like on the postcard, but once the blue paint hit the white canvas, it was too runny and rather than continuing to run, it just stayed put and then bled. A smarter artsy gal would have thought to paint that white canvas with gesso before beginning. Now, it’s noted for next time. I wanted to write something in one circle, similar to the postcard. I figured these shoes were pretty loud, and will draw attention, so when people are looking down they will have something to read. I quickly decided “hello” just because I thought it would be funny, like, “hello, why are you looking down at my shoes, rather than at my face”. 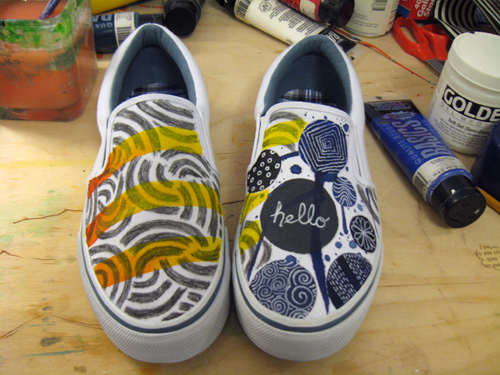 Step four: Next, as if the shoes weren’t loud enough, I had to inject a bit of color and interest to the first shoe and decided to go with a transparent gradient swoosh that would extend over to the second shoe. Before painting, I sprayed a light even layer of fixative over the shoe, so the pencil wouldn’t smudge. 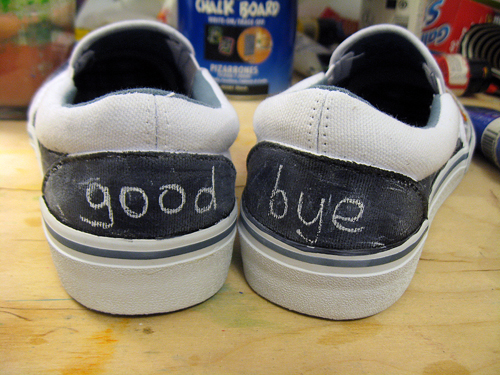 Step five: On the backs and outsides of the shoes I painted generous amounts and layers of my all time favorite…Chalk Board Paint. I think I’ve shared this technique here before, but I love it so much I’ll share it again. For the longest time I’ve wanted to paint everything with chalkboard paint. The problem with that is that chalk is very temporary and easily smudged and smeared. If it gets wet at all, bam!, it’s gone. I  wanted to use the chalkboard paint and chalk look on some mail art, but didn’t want the white chalk to disappear before it reached it’s destination. If you spray it with fixative, the chalk disappears. Using white paint just doesn’t have the same look as chalk. Then I rediscovered an old box of dry pastels from college. It works great. It still smudges, but it’s more permanent and more opaque. Also, if you wish for the message to remain permanent, then you can spray it with fixative and it doesn’t disappear, yay!

Since I went with “hello” on the front of the shoes, I just quickly chalked in a “good” and “bye” on the heels. And this makes me laugh because for some reason it makes me think of that cheesy line (preferably said in a southern drawl) “I hate to see you leave, but I love to watch you go”. I’m not too concerned with them getting smudged or dirty as indicated above, but if you are attempting some altered shoes yourself,  you could paint a clear matte finish over them to keep them safe.

I know fashion has a lot to do with confidence, now let’s see if I can muster up enough to wear these beauties out in public.

edit: These shoes have since been featured on AOL for an article about creative uses for chalkboard paint.