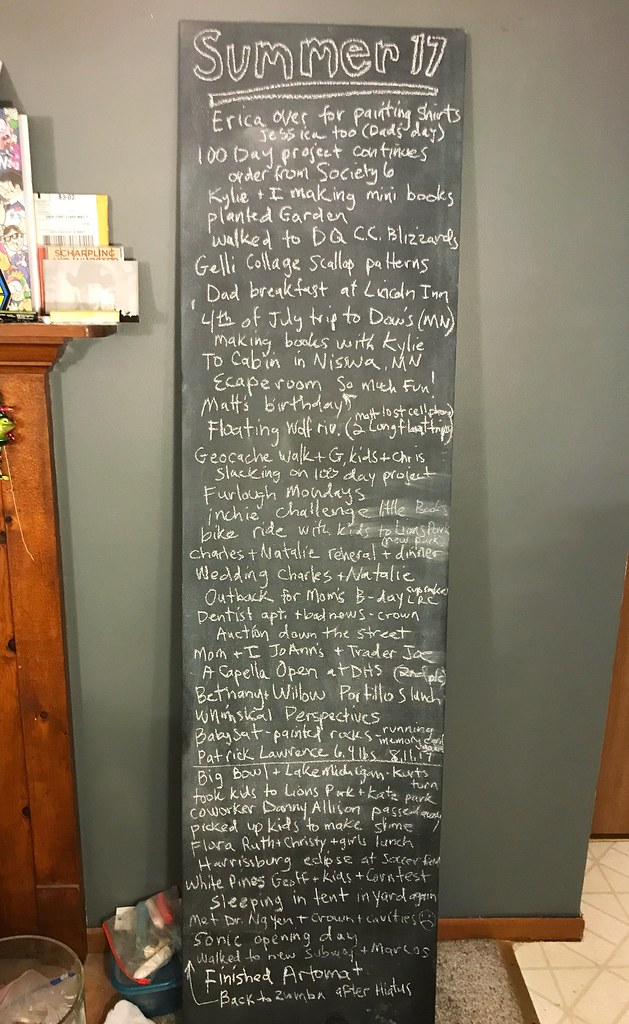 The summer was crazy! I almost ran out of room on the board.

Recently I listened to an episode of the Happier Podcast (episode 134) and a listener shared the idea of a “Ta-Da List”. Gretchen spoke about “monitoring” where you pay attention to your actions and this can aid you in regulating and modifying behavior as well as thought patterns. If you tend to beat yourself up about doing (or not doing things) you may be pleasantly (or not so pleasantly) surprised to see your actions when monitored. The idea of the ta-da list is that you write the things that you have done and accomplished after the fact, rather than things you need to do (like on a to-do list).

While I do love a to-do list, Gretchen said that a ta-da list might be especially helpful to Rebels (from her book The Four Tendencies) who might otherwise resist to-do lists. For the record when I took the four tendencies quiz I got Rebel, and as a true to Rebel I have doubted it but then refused to double confirm it, which pretty much solidifies my rebel status that much more (insert laugh cry emoji here). A quality of rebels is resisting internal and external expectations, and that is pretty much me in a nutshell.

If I remember correctly, I started doing these seasonal chalkboard lists for lack of any other chronicle of my life. I love a good scrapbook, but I had to admit to myself, it’s just not happening. I used to keep journals when I was younger, but at one point when I went back and started rereading, I realized that I had the tendency to only write when I was mad or upset and it gave a very skewed idea of what my life was like and it was REALLY depressing, so I stopped writing. These chalkboards help remind me of how productive I was, as well as bring back the memories of those events.