Whoops! I completely forgot to share my Renegade haul from September 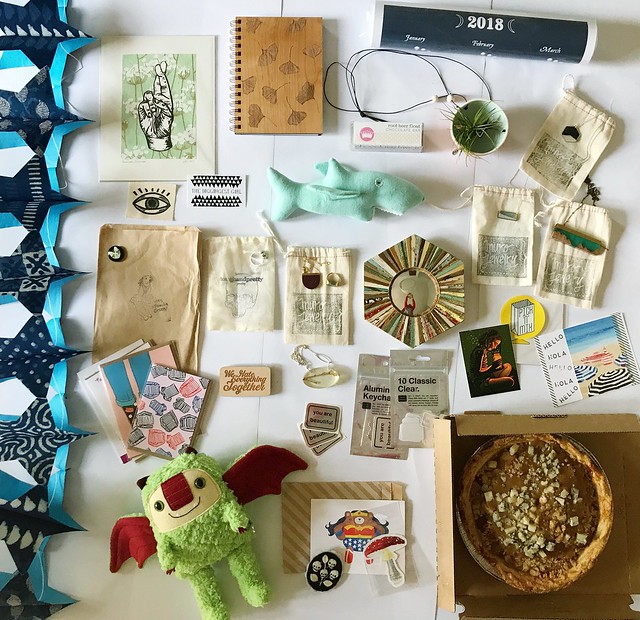 This is everything my sister and I bought at Renegade Chicago, September 2017.

What’s funny is that I haven’t allowed myself to take any of my items (pie aside) out of the bag I have everything in, in my studio, until I do this post. I didn’t want to lose track of all of the business cards, so I could link back to everything. Plus there are a few things in here that are gifts for other people and I didn’t want to spoil any of them.

Starting at the top the left and zigzaging,
Fabric Origami Star Banner by Twenty Nine States
Fingers crossed relief print, and eyeball print patch are from The Diggingest Girl,
The etched ginko notebook is from Cardtorial,
Rootbeer Float chocolate Bar (my sister’s) by Chocolate Twist,
2018 Moon Calendar (my sister’s) by Margins Imprint,
Ceramic hanging planter and air plant (my sister’s) is from Kelso Doesn’t Dance,
Jewelry (my sister’s) from Muro Jewelry
They are kind of covered up, but Pick N Mix print cards by Sean Mort (My sister gifted these to me later)
The hello card was one my sister made at the Paper Source booth
Lightning Bug illustration card (my sister’s) by Methane Studios,
You Are Beautiful stickers and keychain (my sister birthday gifted to me later) by You Are Beautiful,
Reclaimed wood convex mirror by Bergeron Woodworks (my sister gifted to me)
Shark softie baby rattle (my sister’s) by Chipper Handmade,
More Muro Jewelry (mine),
Skull ring by Tough And Pretty,
We Hate Everything Together magnet by 6by6Arts,
Cards and pinback button by La Familia Green
Green monster softie by Mary Wells Design,
Sticker and skull felt brooch by Migration Goods,
and Blue Cheese Praline Pear Pie by Justice of the Pies

We had a pretty good haul this year and I was happy to see a lot of new shops as well as a more indie feel overall. I have been feeling more and more lately that Renegade was getting to be so big and so polished that it was turning commercial, and should no longer be called a craft show. You’d see booths for actual brick and mortar stores and to me, that’s not in the spirit of Renegade.

The weather was perfect.

Things that were popular this year seemed to be a lot of soap (and maybe candle?) booths, enamel pins and patches, ceramics, linen and fabric scarves, a lot of character and quote references to tv shows (Park and Rec, Broad City, etc.). There were a lot more stationers there than I ever remember seeing before, which made me so happy. I also noticed a lot of chunky beaded necklaces (mostly made from fimo) similar to the ones I make from paper clay. There were a few space, celestial, moon things, but we were surprised overall that there weren’t tons of eclipse things. Also, I didn’t notice it at the time, but searching for the origami banner maker made me realize there were SO many makers with hand dyed fabrics. 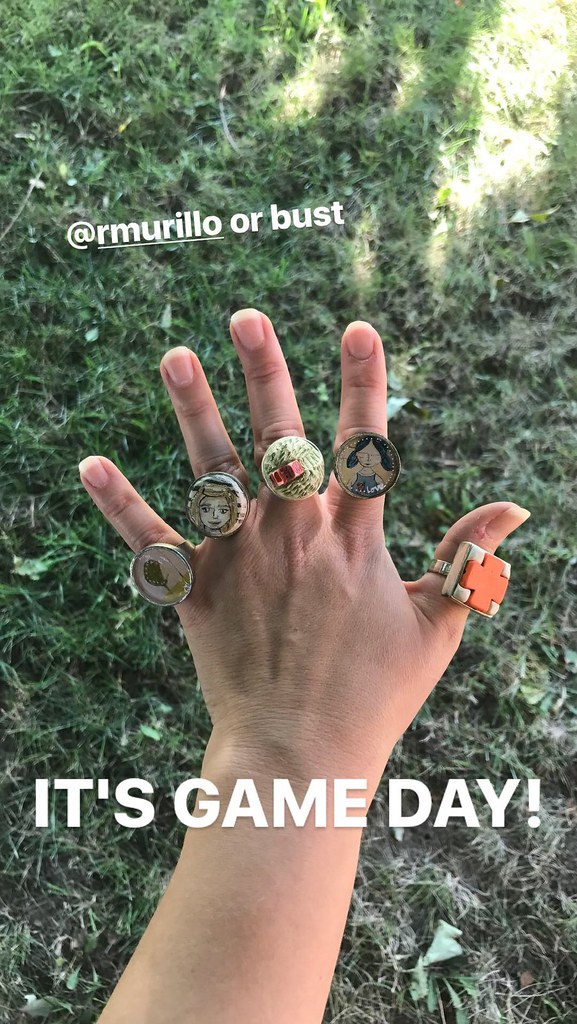 BUT, the most important part of Renegade this year was not the booths, or the weather, or the things we brought home, but rather, who we went to see. Muro Jewelry was selling for the first time at Renegade Chicago and that meant I would finally be meeting my dear friend Rosa Murillo for the very first time in real life. We have been friends for over 10 years, ever since Rosa reached out to me. She thought I might be interested in her Found Art Tuesday project, and I was, and we’ve been friends ever since. 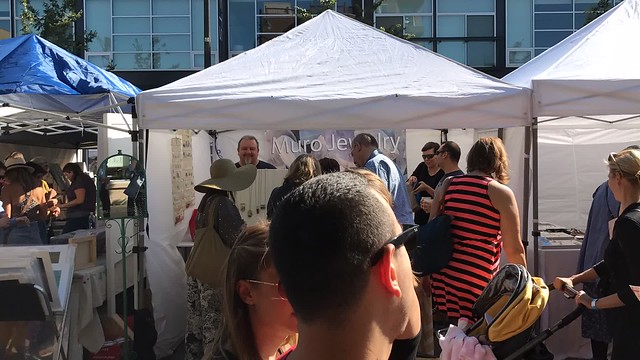 Here’s a video above, that I caught of Rosa and her husband Ruben in their booth on the first day of the fair. I was just about to type that I somehow wasn’t nervous meeting her and then I remembered reality, lol. As I got closer and closer to her booth my heart was pounding out of my chest. When I hugged her I thought she’d feel me shaking. (You may have guessed I have a little bit of social anxiety, lol). After that though, everything was good. We’ve skyped, face-timed and talked on the phone before so I knew what to expect. Side story: I loathe talking on the phone, so for the longest time Rosa used to call me and leave me voicemail messages because she knew that I would never answer, lol. 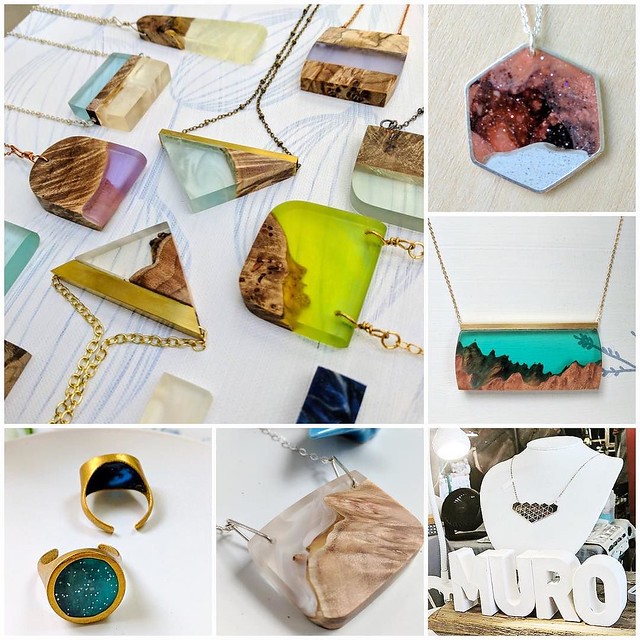 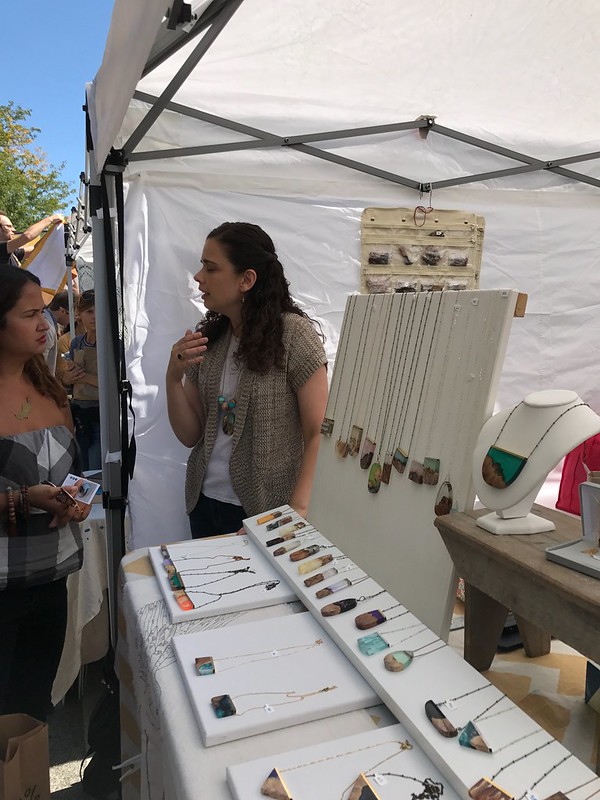 Rosa was able to let Ruben take over the booth for a while, and she joined us to shop the show. 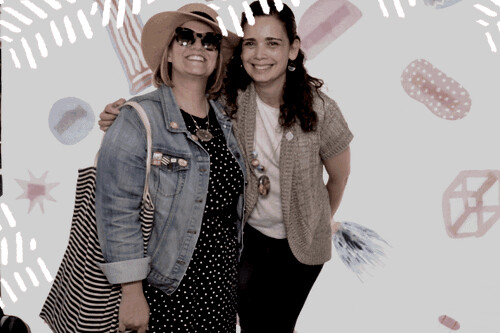 I knew right away we had to make our way to the photobooth. It’s an annual tradition!

I own so much of her jewelry, from the past, to what has evolved into her current body of breathtaking work. It was so fun to see a whole booth of her jewelry, and so hard to pick and choose what I was going to walk away with. She gave me a branch necklace for my birthday, and I purchased a necklace and ring.

I made her one of my chunky beaded necklaces, you can see below. She put it on right away, which was kind of embarrassing because I like to think of my necklaces looking like a giant kindergartner made them, so I feel like it stuck out next to all of her grown up “adult jewelry”. Later she told me that someone asked if she sold necklaces like the one she was wearing and how I needed to make more and sell, sell, sell them! At first I was flattered, but then I wondered if it might have been questionable “the same person that made this luxurious work, also made that?!” lol. I’m not trying to bash my work, I love my necklaces, but they are definitely a bit more niche, than jewelry you would find at a jewelry store. And clearly similar necklaces were being sold at many booths at Renegade, as I mentioned above. 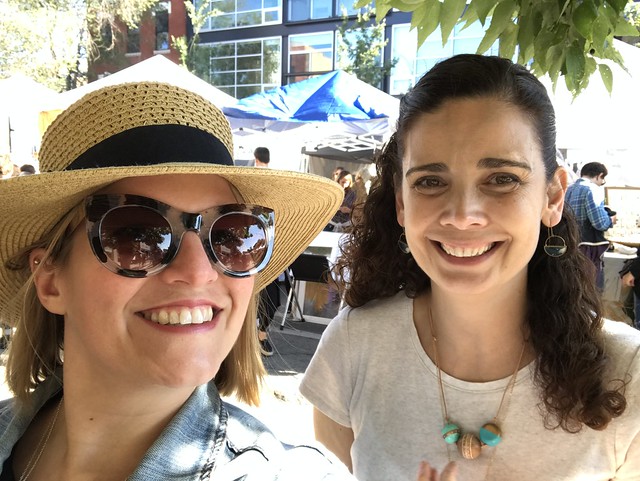 Rosa has done several Renegades across the country, but never the original… Chicago. I’ve been trying to get her to come for ages. It really is the largest of all of the fests they do! Chicago did not disappoint. Muro Jewelry did amazingly well, and they ran out of business cards and bags early Sunday. She also brought enough jewelry to probably sell at (what she thought would be 2 shows) as well as enough for another event that they were hitting up on the way home. Turns out they barely scraped by! Chicago LOVES Muro! She has already decided to come back for the Winter show (which I’ve never been to before).

And if all of this wasn’t enough… I’ll have another post coming because… right before Renegade I entered an instagram loop giveaway, where I had to follow a bunch of shops that would be at the show, and as we were leaving Chicago that day I got an alert that I had WON! I got a huge box of loot that I also haven’t allowed myself to use any of the items yet either, so stay tuned for that.

Oh, and I can’t forget the link to past Renegade Haul posts.