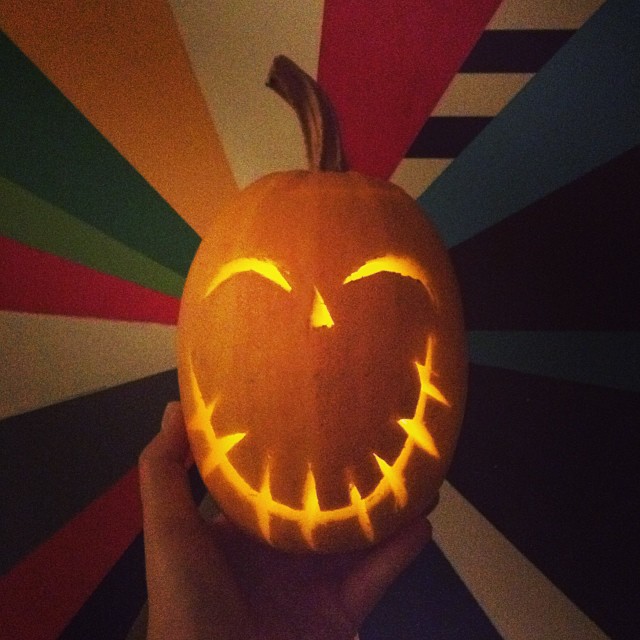 Happy Halloween! We waited until last minute to carve pumpkins this year, 10 p.m. on the eve of Halloween. I put on Nightmare Before Christmas and cleaned, carved and collected seeds. Matt came to join me but then promptly fell asleep on the couch so I cut his open and cleaned it out, he’ll have to carve it tomorrow. Every year at this time I think how people could make some decent money selling already cleaned out pumpkins. I know I’d pay $20 to not have to do that myself. The above pumpkin was just a bitty one that we grew in our garden, my other pumpkin was probably 4 times the size. 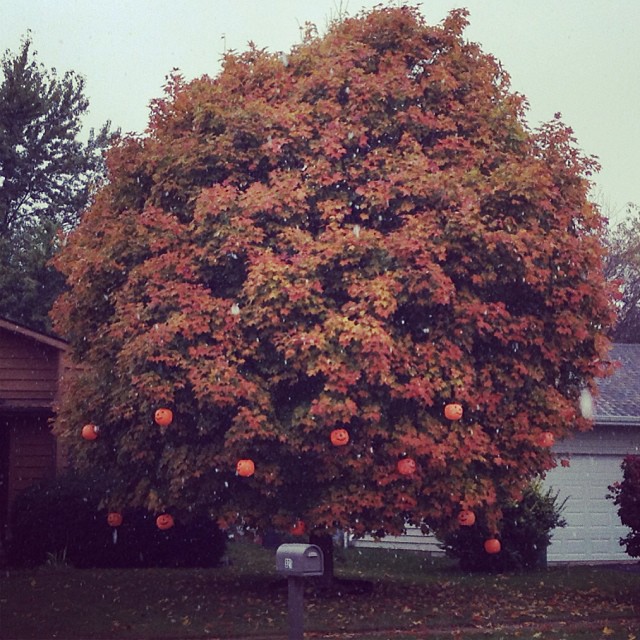 I got the above idea from Heidi Kenney and bought 12 of those $1 trick or treat pumpkins to decorate our front tree. I also bought LED tealights and plan on putting some in each pumpkin so they are lit up for the evening on Halloween. I will hopefully get a good picture of that later. It’s supposed to rain so I doubt we will have lots of trick or treaters, which is a real bummer after the lead up to the holiday. Earlier this week we watched Hocus Pocus and I’ve had our holiday decorations up all month and have been listening to my Monster Mash pandora playlist since mid September. 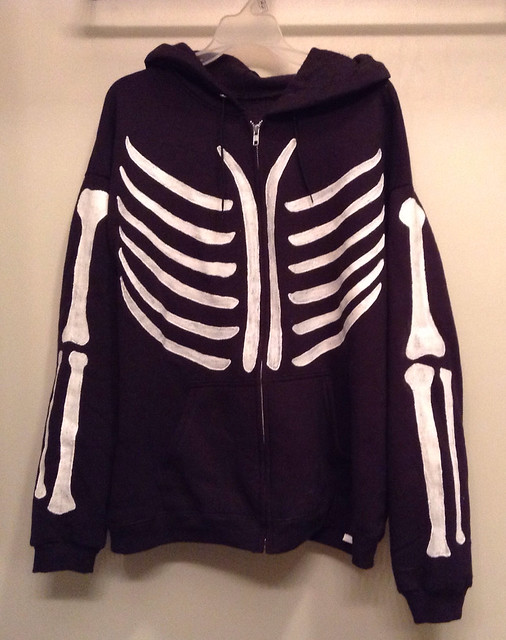 At the Craft Extravaganza, I made this skeleton zipper hoodie. I’ve had the idea for some time that I would like a skeleton top and leggings. I think I looked around a little bit but never found the simple style I was looking for. Sometimes I would see great ones but they would only be in kid’s sizes. Finally I had the idea that I could just make a hoodie easy enough and bought a solid black one at Target in the men’s department. I did google image search of skeletons and drew up a simple sketch and just painted it on with white fabric paint. I love how it came out and I’ve worn it so many times already since then. I’ve received some compliments on it too. I imagine it will be an all year hoodie, not just Halloween. Leggings will be up next. 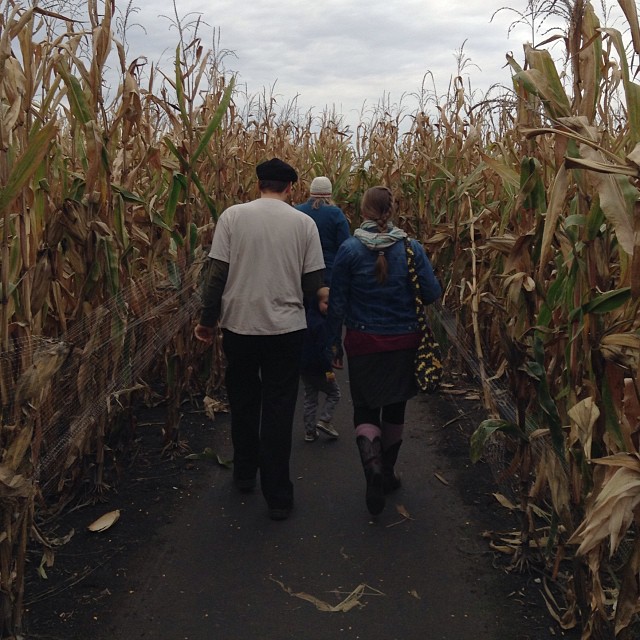 A couple of weekends ago my sister, brother, SIL, nephew, niece and I did the corn maze at Jonamac Orchard. When just went during the day and it had been years since I’ve done it before. The orchard recently hit the big time when The Onion did a story on the haunted version of the maze, here.

Tuesday’s Fall Color was Red. I had the idea of turning real leaves into buttons and pairing it with a cableknit scarf I knit. 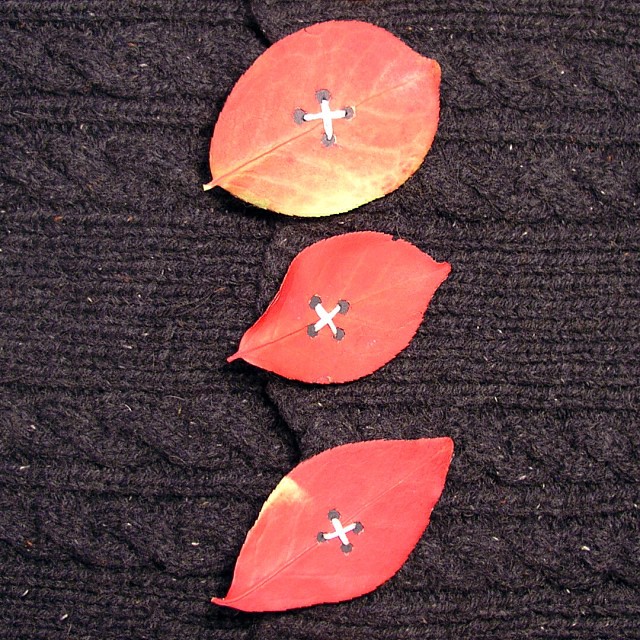 Unfortunately, I realized that it’s already that time of year when I get home from work and there is no more natural light left. This weekend is time saving so that’s that. The picture turned out crap, the detail on the knit is great but the leaves are FLAT and might as well have been drawings, you see no detail in their vein work, or that the thread is actual real thread, making each leaf a REAL BUTTON. I was on a rampage with how angry I was about there being no more daylight, cursing out stupid bloggers (generally, not anyone specifically) that don’t have to work a day job and get to stay home and can take perfectly lit pictures all day long. Yeah, pretty much. I might want to get myself one of those happy lamps just for the safety of successful lifestyle bloggers with pretty pictures. It would be for light therapy, not for taking pictures with. 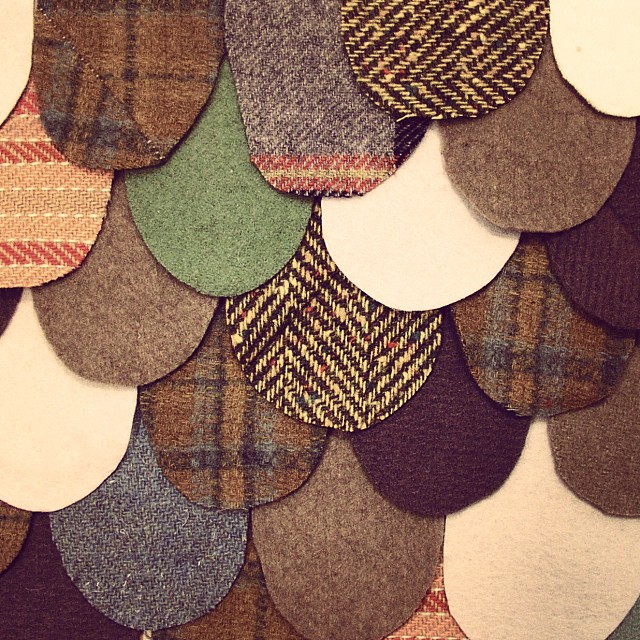 Day 3, was Brown. Once again my plans for a fall outdoor picture squashed because I have to work for a living. (Yeah, I’m angry, dramatic, and venting, but really the whole no daylight thing REALLY angers me every year). I remembered the felt I’ve been cutting out for my “someday” halloween monster costume. I picked out the browns, added a few other accent color pieces and snapped this picture. It doesn’t capture the outdoor fall, but I think the wools do a good job with fall mood.

I hope you have a happy Halloween with more treats than tricks.