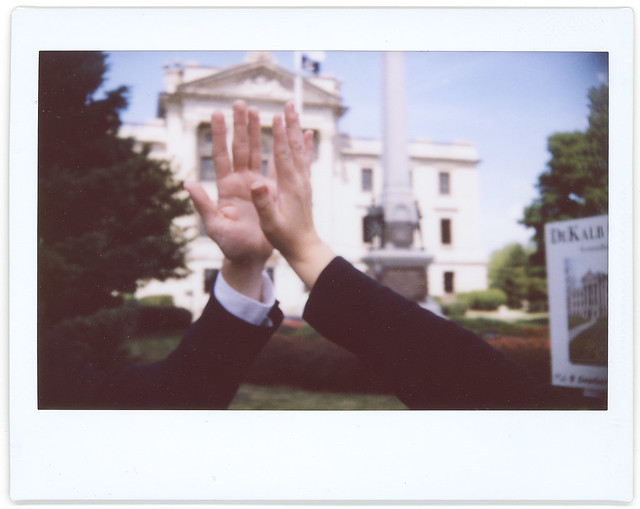 Above is an instant photograph taken earlier today with my fuji instax that I hope illustrates the AWESOMOSITY of today.

Earlier today was our final court date for the return of our substantial security deposit from our former landlord who illegally withheld it. By fate or coincidence (but definitely undeniable synchronicity) it is also the ONE YEAR anniversary of when we closed out our rental at the duplex and officially moved into our own home.

From the beginning I had these “feelings” that we were going to have to kiss our security deposit goodbye. Don’t get me wrong, we took care of the place over the 3+ years we lived there. We left the place in excellent condition, which the landlord did not dispute. If it had been up to me, I would have just walked away and kissed the grand goodbye, just to be rid of the guy. I’m more than thrilled to be a homeowner so we don’t have to come home and find out our landlord has not only entered our home without our permission but let his daughter and her friend in as well. Matt however, nor his parents, would allow for this injustice. Exactly one year later we are finally able to bring this mess to a close.
The judge was impressed with Matt’s case and told him so on two occasions. The case was a slam dunk on our side. Not only that (and this is where it gets good) but our landlord got publicly spanked by the judge for multiple glaring improper AND illegal business offenses that the judge said “could put him behind bars for 30 days right now.”

Although the judge didn’t reward us the extra penalty fee the landlord should have paid, the judge did agree that we were fully in the right on the case AND the penalty, and we will get all of our money that was owed to us back, as well as additional fees owed to us by court costs, etc. Having the additional penalty fee would have been nice, but knowing that the judge said we were right and the landlord was wrong is equally rewarding to me. Also, watching the judge come down on our old landlord and then have him shoot out of the courtroom with his tail between his legs was pretty priceless as well.

While Matt was up at the bench presenting the case, I was sitting with Matt’s parents in the audience. When it became obvious how the case was going down I was so psyched and relieved that we were going to win, I wanted to do the Bender fist pump (like above). That’s when I knew I had to get the picture of us high-fiving in front of the court house. In cases like this you hope that the judge will listen to all sides of the story, be impartial, and that justice will prevail, and today my friends, today it did!

First our cat is returned to us, then we win the case against our landlord. Good things happen in 3s, folks, and we just bought ourselves 3 lotto tickets.