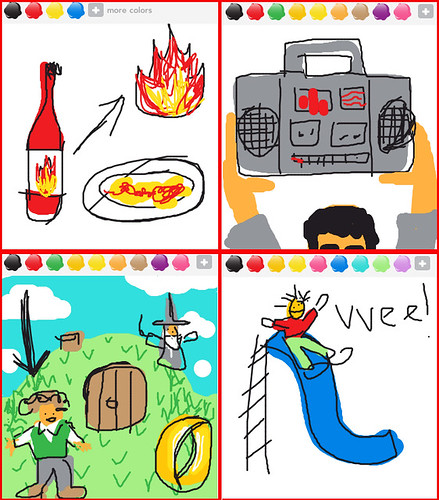 I’ll admit it, up until 2 or 3 weeks ago my iphone was just an expensive instagram tool. But since then I’ve discovered the pictionary-like app, Draw Something and have become completely addicted. In that time period the app must have exploded in popularity too, because 1. it went from there being two other people on my facebook friends list that also played to dozens, and 2. I have the free app, and so I must endure occasional ads, but they went from ads for other app games to ads by big businesses like Clorox and USPS. 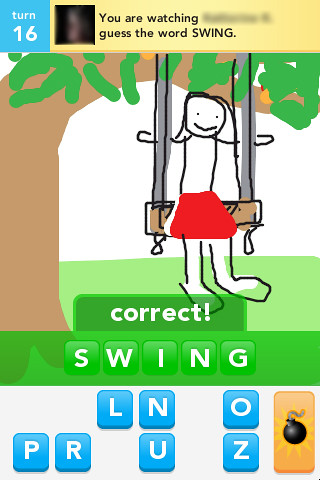 The game is addicting because you have to earn points to buy things like colors (you just start out with the primary colors) and bombs that remove letters and help you guess what the other person is drawing.
My best friend and I were talking about it. When you are guessing a drawing you get to watch the progression as the other person draws, or if they have to scrap their drawing and start over. I like to take advantage of the fact that you can start over and you may want to show multiple screens worth of information, as long as the person is paying attention. When a person guesses correctly, the entire finished drawing shows up for a moment and Erica said it was like a fun little surprise to see a really thorough drawing then. 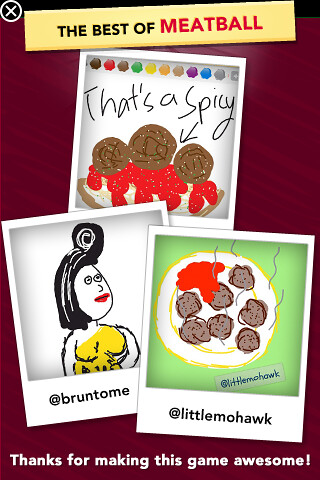 Draw something also periodically shows screens with “Best ofs”and I always think it would be so cool to get on one of those screens. Images aren’t automatically saved anywhere online or to your phone, at least not that I know of, and so once your drawing has been sent and played by the other player it is gone forever. I had been playing the game for quite a while before I thought to do screen caps on some of my drawings. To get a screen cap on your ipod touch or iphone, just press the power and home key at the same time. You have to be quick and time it perfectly because there is a delay. The images above, other than the best of page, are drawings I have done for hotsauce, boombox, frodo, slide and swing.

I encourage you to check it out. You can get the app for free and endure ads, or pay and be ad free. If you check it out, look me up, I’m robayre as usual.