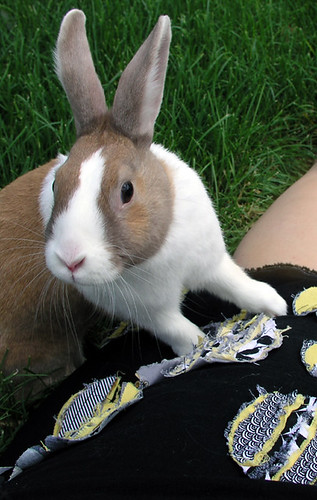 Last night I decided I was going to make a skirt. I have the book 49 Sensational Skirts and had some sudden and driven inspiration. I dropped by JoAnn Fabrics, where they were having a 60% sale on linen, went home and got to business. I wore the creation to work today, and although I did not get any “cute skirt” comments, I didn’t get any sideways glares either, so I’ll just take it as a compliment that people assumed it was a store bought skirt. It’s a simple, just below the knee black skirt with detailing on the left lower portion, seen above.

One more thing, completely unrelated.
Within a week, it has gone from “okay, it’s finally getting to be summery” to “Dear Lord, please bring on a new ice age”. I hate the feeling that I want and need to take a second shower during the day because I’m sweating. yuck. Point being, all week the only thing I’ve craved are the following 3 things: slurpees, thai iced teas, and mcdonalds new sweet tea.

Have a great, cool weekend everyone!