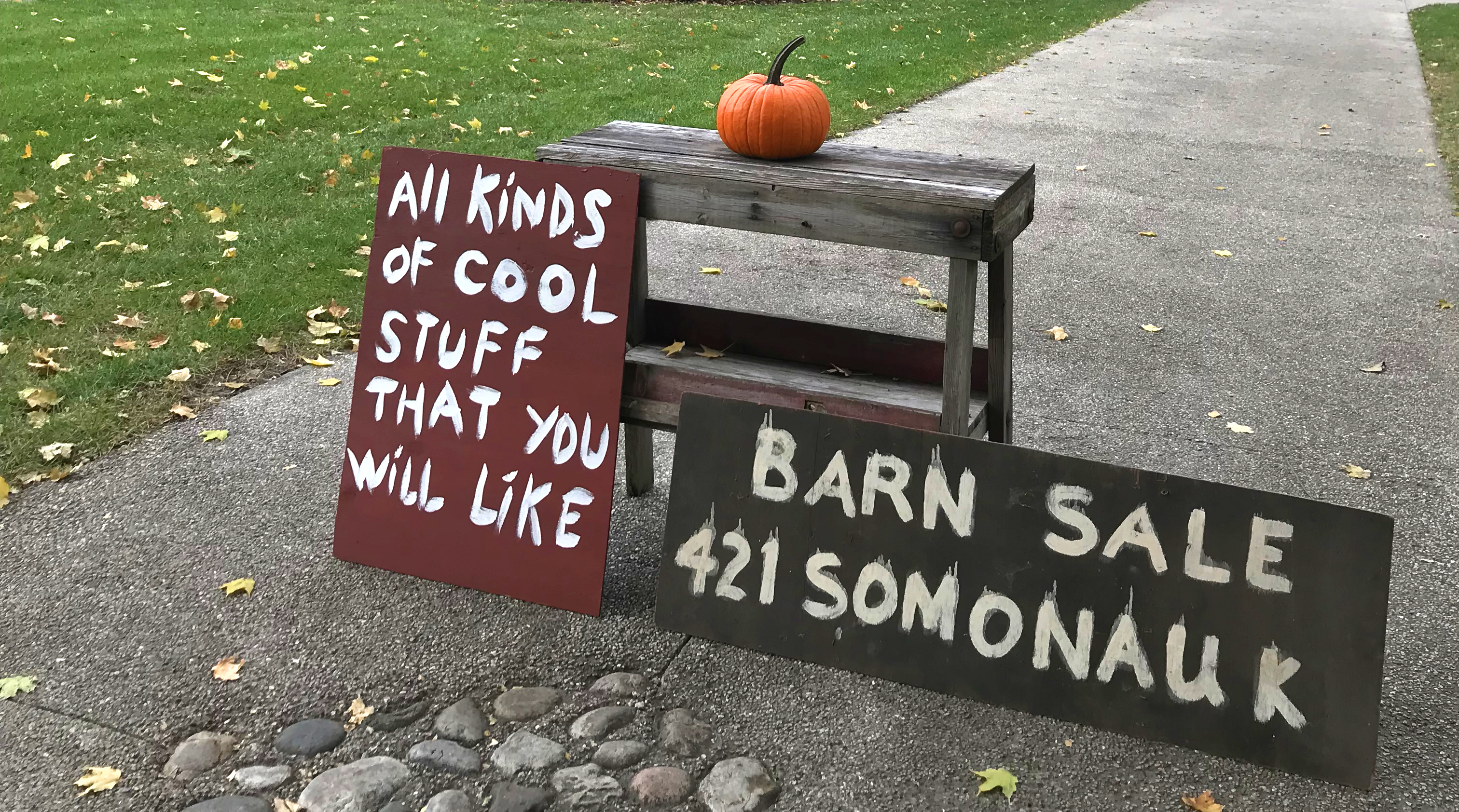 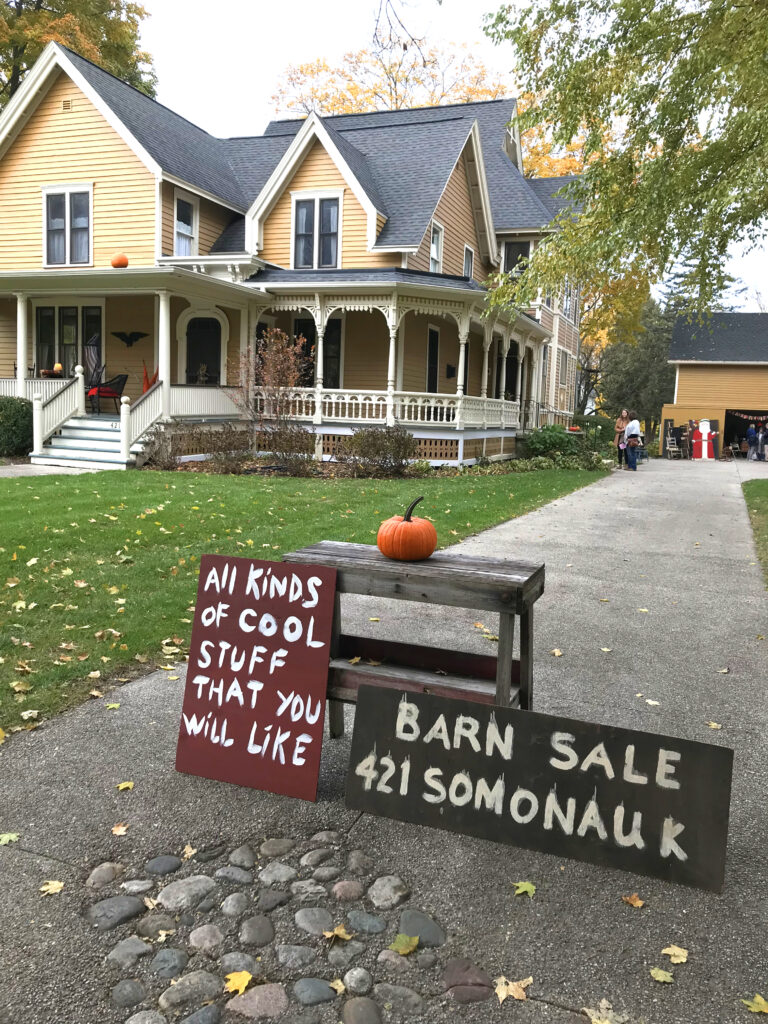 This is a picture I took from the trunk/barn sale last year when I visited as a buyer. This year I sold at that same show. It is organized by my friend and former coworker Kyle White and takes place at a stunning and beautiful old historic home in Sycamore, IL. The house is located right between several other homes that are on the Pumpkin Fest Home Tour, so there’s a good amount of foot traffic of people coming through. While the sale is inside the barn/garage, I got to go inside the house for a quick peek and wow! It was straight up material for magazines, should be used in movies, and apparently associated with the historic Ellwood family in neighboring DeKalb. I asked the owner why it wasn’t included in the home tour. She said it had been in the past, so I’m guessing they just weren’t up to it the last couple of years and sadly, the house is going up for sale shortly, as they eventually move to be closer to grandchildren.

This is the first craft show I’ve done in many years. They can be pretty hard for this anxious introvert, but from knowing Kyle and from visiting last year, this would be a pretty chill show. I hope he continues to do it and there was maybe even talk of adding a second show earlier in the year and continuing to grow it with more vendors.

I REALLY LOVE the “cool stuff” sign so much. I would hang that in my house. Speaking of hanging in my house… I was able to do a swap with Kim Wheaton for one of her lovely woven wall hangings. 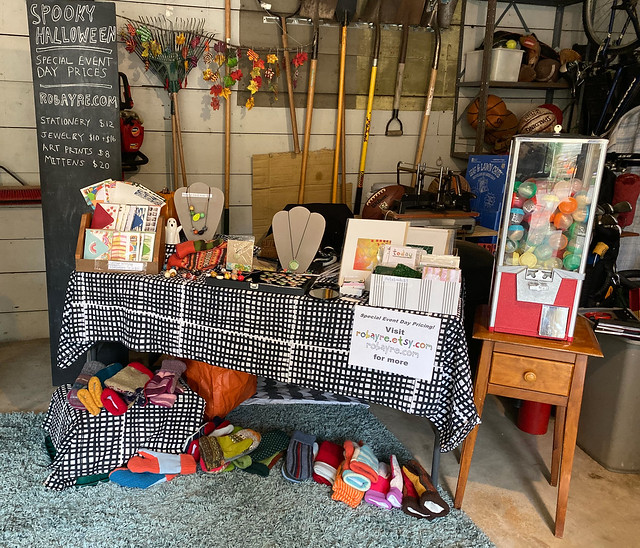 Alright, so my booth — To know me, is to know I have MANY-MANY areas of interest. I make stationery, handbound books, spin yarn, illustrate, paint, pattern and computer design/layout, jewelry making, photography, ceramics, and on and on. In the last several years I have actually been trying to narrow my focus for what I sell to mostly stationery design, which still incorporates illustration. painting, pattern design, layout design, and even sewing when I make my journal covers. I still like making the other things but I don’t stress so much about selling. That being said… I have SO MUCH INVENTORY from when I used to sell at craft shows. For example, I haven’t done any of my resin jewelry in years but have sooo much left. It normally would be listed between $20-$30 but I thought this show might be the perfect opportunity to find new homes for most of it and listed it all at half price… I sold one resin necklace 😂😂😂 Same with my art prints. Perhaps I will take some group pictures and do a liquidation sale online.

After I set up my table I said “It looks like a craft store threw up”, there was just sooo much going on and watching as people walked through I think it was just too much. Which once again reinforced my idea that I need to narrow my product variety. Still, I think it was a great show, got to talk to many people and it was as easy going as I had hoped and expected.

The thing that did the best were the mittens. I’m so glad I brought them because they were a last minute thought and my sister brought them over on their way to the quilt show they were helping organize. It was a very cold-cold day and so they were a perfect match for this event. Our inventory for mittens is greatly depleted and so now I am looking forward to having mitten sewing sessions with my mom and sister again.

This show marked the last big thing on my schedule for a while. From the end of summer until now it’s been one thing after another thing after another. I feel reinvigorated and this sense of freedom now and I’m so excited to get to work on some projects around the house, including cleaning up my very messy studio. I also want to work on my latest Art-o-mat series.