As promised, here is a loot/haul post from my trip to Renegade Chicago this year. Don’t miss the video of the fair at the bottom.

While assembling this post I went back to properly tag all my Renegade posts and realize that our trips to this fair predate my blog here, which goes back to 2006. I don’t think we went to the very first RCF (2003) but I think we made it to the 2nd one. For several years it was in Wicker Park, yes, the actual park, before it combined with the Division Street Festival. I feel like if there was a Division Street Festival before, it might have gotten overshadowed completely by the RCF now. It was also really cool, looking through old posts and seeing everything that I had purchased over the years and how the most of those items are still very much part of my life to this day.

That idea, combined with my experience shopping this year, I realize that even though I spend a bunch each year, I’m not buying blindly or aimlessly. I only buy what I REALLY LOVE.

As exampled in stack A. 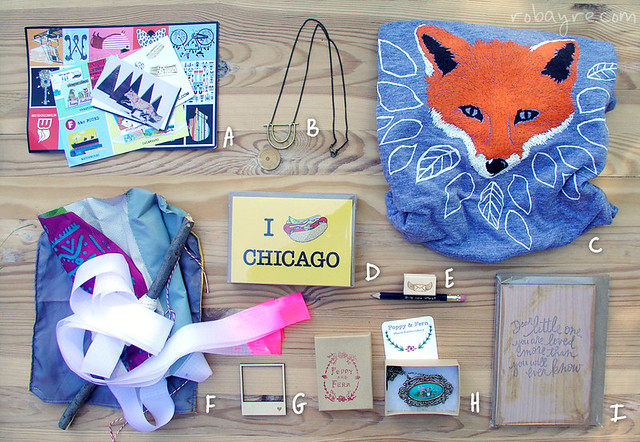 I usually collect tons of business cards each year, and this year was no different. There are always so many booths that I walk into and fall in love with their products, only to discover that there isn’t one particular piece that speaks to me. I’ll pick up the cards to keep a tab on their online shop and hope that maybe I’ll see a piece there that I just have to have.

We learned fairly early on in years past that you have to go to the craft fair on a Saturday because if you go on a Sunday all the good stuff is bought up. Well, not ALL the good stuff, but the variety is no longer there. One of the booths this year, that had tons of  pieces but not one piece that screamed ROBYN, was Build With Wood. They sold wood necklaces with resin centers that hold treasures of nature, like seeds, leaves, and lichen. They reminded me very much of long time “Robayre Favorite” Fern Works, but instead of silver, wood. I’d really love to own my own piece from Build With Wood someday.

B – Heron and Lamb necklace. This is a booth I’ve purchased from in previous years and started following on instagram. Recently she shared a new direction she was going with her work and I was really looking forward to purchasing this piece from her booth this year.

C – Gnome Enterprises shirt. This is a repurchase of a beloved shirt I bought at Renegade in 2010. The next year I bought another shirt of theirs with an american buffalo on it. In 2012 I debated buying another one of these fox shirts because I love it so much and with as much as it is worn it will inevitably get worn out, but I didn’t push the button. Figures, because last year we didn’t see their booth at all. This year I saw their booth and jumped! Let me highly recommend their shirts, they are SO COZY AND COMFORTABLE.

D – The Found I hotdog Chicago cards. I think this is a booth I’ve purchased cards from in the past. Well, I was going to buy one card which was $5 but then I saw that I could buy the set with 7 cards for $8. You do the math. I was going to buy one for myself, but now I can send some out to people.  1. I do hotdog Chicago and 2. it reminded me of this whole trademark episode I heard on 99 Percent Invisible on PRX.

E – Letter Writers Alliance – stamp. I just love this booth every year as well. I have some cancellation stamps made into buttons from them from a previous year and I just happen to be wearing a skirt that has one of those buttons on it permanently.

F – The Kite Collective – This beautiful kite has already been tested and flown successfully at the Kite Festival yesterday. 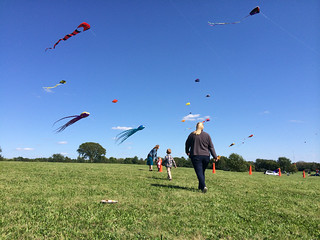 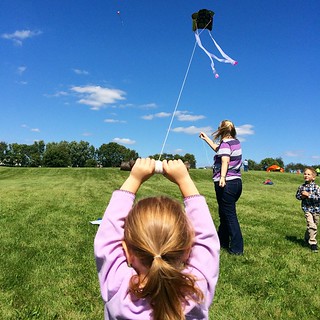 H – Poppy and Fern, necklace. This is one of those booths that we’ve fawned over in past years, but couldn’t find one particular piece that was meant for me. This year I finally found one and am so happy with it, I think it deserves its own post later.

I – Cardtorial, wooden cards. We actually bought 3 for a special deal.

There should totally be a site “Overheard at Renegade” if there isn’t one already. I would have some great material, such as the girl who said that while she was hunting for her last apartment, almost all of the places she looked at had one of those Chicago neighborhood map posters hanging. I have one of those posters too. And then there was the NY lady in the Gnome Enterprises booth who thought she could throw her self important weight around because she had bought shirts from them in Williamsburg and the Hamptons and then she even had to call her daughter in NY to tell them “They have Gnome Enterprises in Chicago now too!” lol. I think she bought 6 shirts. Lady, they’ve been here for a long time.

Looking through the roster of vendors makes me feel like I must have missed so many booths. But then I think back to a conversation I just had yesterday where I was talking about how much I struggle with displays for my own craft booths. I said that because of my background being in 2D design and knowing photography, I’m much more comfortable with photographing my products and that when it comes to craft booths I just have no interest and want to simply throw all my stuff out on a table. But, I also understand the difference that a quality picture or display can make on selling. A friend had asked me to do some “research” while I was at Renegade and look at booths for creative displays. I realized quickly on that if I want to actually shop that I can’t be eyeing displays. In successful booths the displays are so great that you don’t even notice them and just focus on the products and those spectacular displays elevate the quality and price of the products compared to the exact same type of products that might just be thrown out onto a table.

I used Instagram’s new app Hyperlapse to take some videos while I was at Renegade this year. I put them together with another app which added that annoying logo in the corner. Not sure how to add music yet. But this video might give you a glimpse into how big and busy Renegade is.