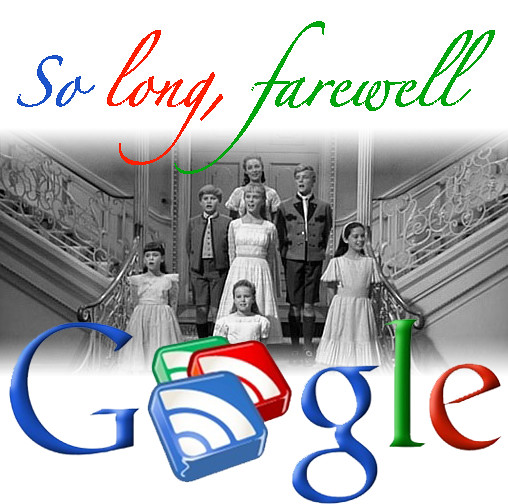 It’s halfway through June and time is getting tight, guys. If you haven’t heard, Google Reader will be terminated July 1st. If you don’t use Google Reader, you can disregard this post entirely.

Google announced this months ago, but I’ve been waiting it out. See, I got burned by this before. It was probably in 2005(ish) Bloglines (my previous RSS reader) announced that they too were going to be dissolving their services. I heard great things about Google Reader and made the big switch… just in time for Bloglines to be bought out and continue their services. But, by then I had already made the switch so there was no looking back.

It’s been in the works for a while, as Google started removing more and more of the social media aspects (voting, liking and sharing posts) and then making it progressively harder to access it (removing it from the main page, then the scrolldown menu, etc.).

What I’m hearing is that “things are changing” and that Google recognizes that people aren’t getting their news and information the same way they used to. Apparently people are visiting facebook and twitter, getting updates and newsletters directly to their inbox, or going straight to the source. But news, shmooze, if I want to get actual news I go to a news site. I don’t use Reader as a source of “news”, it’s how I keep up with the blogs I follow. Before discovering RSS readers I used to keep everything bookmarked. I had a list a mile long and I would literally check each blog, every day (sometimes multiple times a day if it was a blog I really loved) just to see if there were updates. There is no way I am going back to that, and no way I would rely on hopefully seeing a link posted to facebook to know when my friends have updated their blogs. Blogs are a completely different creature from news and magazine sites. The kind of blogs I follow are more like reading a good book where the main characters become your friends. I want to hear what is happening in their day-to-day lives, what projects they have in the works and what exciting things, links and ideas they’d like to share.

So, I’ve been postponing an official switch over to a new subscriber, hoping that one would emerge as the true replacement, orrrr, crossing my fingers, that Google would be all “heyyy, just kidding folks, we realized that investing in things like Google Glasses, Google shoes and even Google+ isn’t as wise an investment as we thought, come back!” A girl can dream, right?

OK, but really, time is ticking. I can’t waste any more time hoping for Google to change their mind. Now is the time that I should get serious and make sure my blog subscriptions are backed up. It seems to come down to 3 options (for my type of blog subscriptions) Feedly, Bloglines and Bloglovin. Fortunately, I already had accounts at all 3 alternatives, previously . Now, It’s just a matter of updating my subscriptions to the most current list.

Not only do I not want to miss my connections with fellow bloggers, I don’t you to miss your connections either. A few weeks ago there was a slick site called replacereader.com that asked people to vote for their choice, but it is either down or has been removed. Doing a quick google search for top google reader replacements will offer plenty of help. Some sites ask you to export a file of information from google reader in order to import your subscriptions into their site. So, don’t wait until the last minute. I think back when I used to bookmark/favorite each site (through internet explorer, even, ha!) and then accidentally delete a link or the computer would crash and then lose the entire list. A year later I’d remember I had forgotten about some old dear site I used to love.

I’ll post again in a few days with some more helpful information.