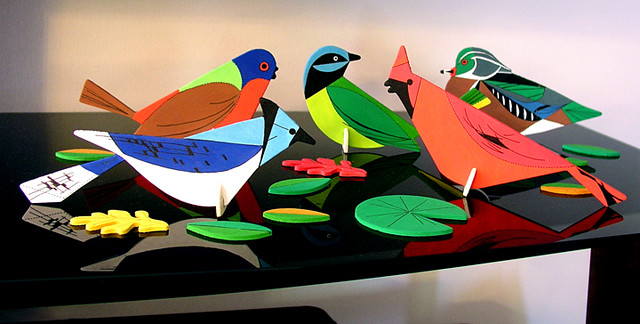 Yesterday we were at Target and I was looking for wrapping paper when I happened down an office supply isle. This isle also happens to house the Kid Made Modern line and the Charley Harper Wooden Bird Kit caught my eye. It’s a kids craft, but I thought it might be a fun mindless craft, and I contemplated turning it into a mobile. Ya know, birds on a mobile, make sense, right?

Last night while Matt and a few friends played cards downstairs, I watched some bad 70s horror movie on Netflix and painted birds.  They came out great, and I put them on the top shelf of our TV stand (the TV hangs above with only about an 8 inch clearance). Matt really likes them there so I won’t be turning it into a mobile just yet. 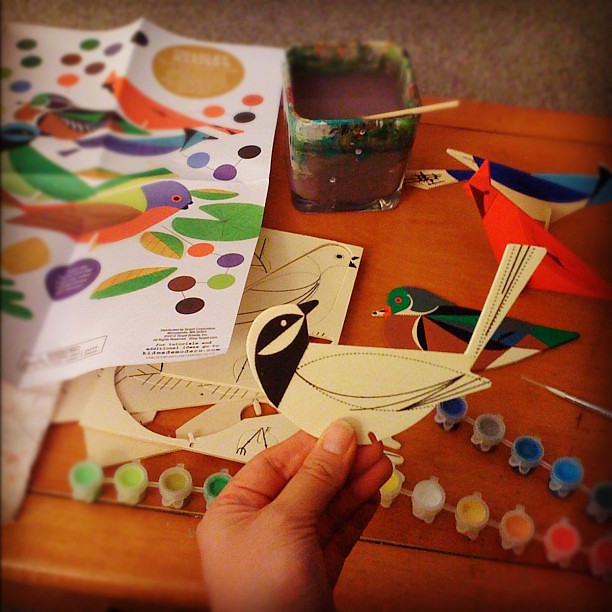 Kid Made Modern is a line of products for children carried at Target, based on the book Kid Made Modern by Todd Oldham. I’ve loved Todd Oldham ever since I first saw him on House of Style. He seems to have such a kind spirit and an approachable, everyday-man way about him. Also, he’s a designer, but really more of a renaissance man, doing everything from designing clothes, building furniture, publishing books and hosting TV shows. There was a great interview with him recently on Grace Bonney’s newish podcast After the Jump.

The birds are actually Charley Harper designs. Charley Harper was an American artist and  illustrator. His work is visually graphic and design stylized, but most often centered around nature.

If you are interested in this kit let me share a few tidbits of wisdom. The kits can be purchased at Target for around $13. If I were to do it again, I’d start by lightly sanding the edges of the birds, fronts and back, because the pieces are die cut from sheets of wood that you pop out. While the edges weren’t really bad, it would have just given the final pieces a more finished look. The instructions are very minimal. Basically it’s just a very rough, heavily designed, poster-like color chart, and the colors aren’t very accurate to the paints that were supplied. I ended up referencing the box cover more often than the instructions. Some of the paints are transparent and show the linework underneath, but most of the paints are pretty opaque. I just painted right over the linework and when I was done went back over the lines with a Micron. I used a Micron rather than a fine tip Sharpie just because Sharpies can sometimes get a pearlescent look to them, and I wanted a flat black. The color chart indicated a black paint, but my paints did not contain any black. I took that to mean I should use the dark gray, as seen on the wood duck. My white paint was already dried up when I opened the package, fortunately I had some white acrylic paint on hand and used that instead. After I was done with a few birds I realized they would look more finished if I wrapped the colors around the edges, so I went back and did that, this is where the sanding would have been helpful. I also painted the backs all solid black (once again with my own paint I had on hand).

I wanted my birds to look like the box, but if you get this for kids I would suggest a more loose interpretation and let them go wild painting.