So, it’s been years now since I created my first “yearly list“. I didn’t even create one this year because I felt like I needed to focus on crossing off all the things on my previous lists, rather than continue adding to them. This last weekend I did another thing that I can finally check off… #16 from 2010 – eat falafel. 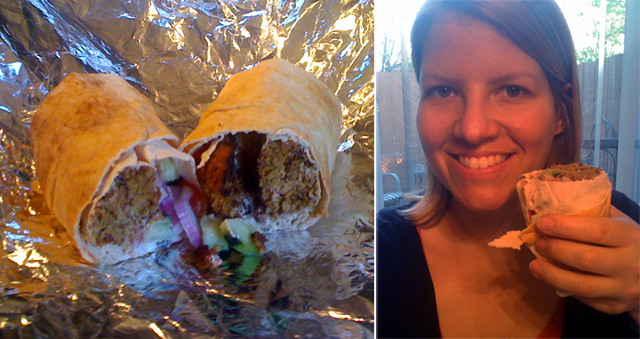 You might say I live under a rock, but it wasn’t until about 5 years ago that I had even heard of falafel. I think I’d read about it online and then like that it was popping up everywhere. It’s description was so foreign to me. I got this idea that it was a deep fried bready thing that I pictured to be like hush puppies, but that you ate it on a pita and it had some sort of white sauce on it. A bread item that you eat on more bread, hmmm, not sure about that? I found out it was a middle eastern food and had it in my mind that I wanted to eat it at a middle eastern restaurant in Chicago. That being said, any time I was in Chicago it was with other people and we had other plans, or I was afraid to ask about searching out some good falafel. I was also kind of building it up so that it had to be this big event – the FIRST TIME I HAD FALAFEL!

Fast forward to recent times. Right before Easter, Matt had a dream where he was eating a lot of vegetables. Normally he’s a MEAT-EATER, so when he woke up it got him thinking and he started doing some research about vegetarianism. He set himself a goal to see if he could go meat free for one month. (Insert My Big Fat Greek Wedding joke here). I am not a vegetarian, but this really has been wonderful. Suddenly he is being very open minded and trying (and enjoying) all sorts of things I couldn’t get him to try before (hummus, soy burgers, etc.) and together we are exploring all sorts of new meat alternatives (seitan, TVP, etc.). It’s been well over a month now and he’s still going strong. With all the new variety brought into his diet he hasn’t even missed real meat.

We’ve been eating out at this local pita place where we first discovered the glory of seitan (seriously, the good quality stuff, how is that not meat?). Then my friend Gail posted on facebook that she has become obsessed with this same pita place’s falafel. My friend Gail went to culinary school, has worked as a pastry chef, and has her own soup company. Her recommendation was all I needed.

We did a little research and decided to order a falafel pita with all sorts of veggies and tzatziki as well as tahini and voila, it was awesome! It was different than I expected, but in a good way. I didn’t really expect it to be like a meat substitute, but it really was. Instead of being bready, it was more like grains and legumes, but with the right seasoning and texture, it tasted much like veggie burgers do.