And the winner is…

But wait, before I announce who won the mixtape bag, let’s talk a bit about music and what I did this weekend. Some of you might have heard that Saturday was Record Store Day. Sadly the closest music store is about 25 miles away. It’s sad because I live in a university town where culture and the support of our local economy should be thriving. We used to have a whole handful of record stores, but then Borders and Barnes and Noble moved into town and not only did we lose our local bookstores, but we lost all of our music stores too.

On Saturday Matt, Tom and I drove to downtown Geneva, and went to Kiss the Sky in support of Record Store day. Around the corner from the shop there was a trash bin covered in CD labels. When I still lived with my parents I had a dresser that had one side completely covered in CD labels, but they were more organized than this. Still, I liked it. 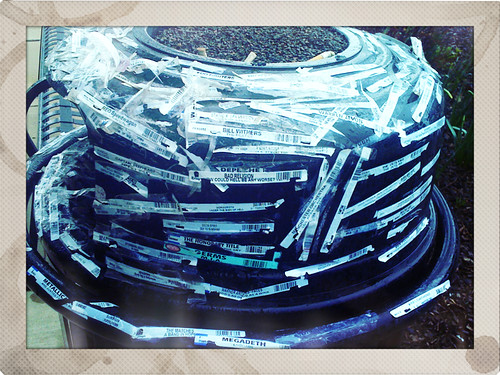 The store was hopping. It was quite crowded and hard to maneuver your way through the narrow isles with so many other customers. 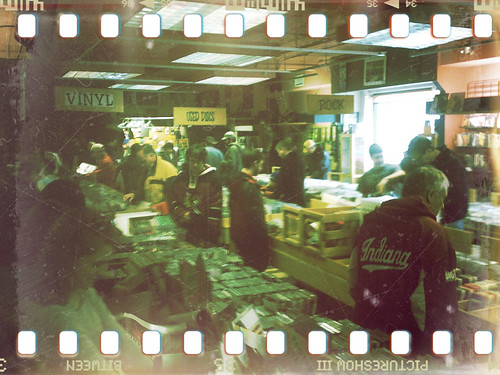 Despite going with two music enthusiasts I was saddened by their lack of support. Tom said “When was the last time you actually bought a CD, I can’t even remember myself.” I responded “last month” and he was shocked. I have only once ever PURCHASED and downloaded an entire album online and that was because I thought the artist was only doing digital and later I found out they had CDs and I was fairly disappointed that I had done that. This does not account for a rare download ahem, of music online, ahem, without financial transactions. More frequently, I’ll buy a track here and a track there online for guilty pleasure songs, when I know I won’t ever buy the rest of the album. But for an album I love, I want to hold it in my hands and open it up and smell the printing of the booklet and the ogle the design, artwork and notes. 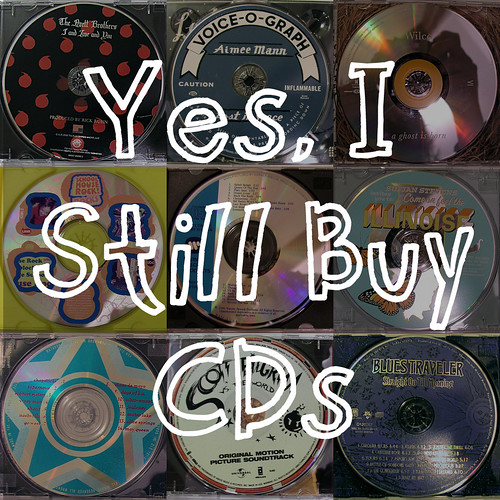 After our trip I have come to the sad conclusion that I think I’m in the minority of people who still buy CDs. It makes me so sad that someday there will no such thing as album artwork and liner notes. Truthfully, I don’t buy CDs as frequently as I did when I was in high school and college. This reminds me of something my friend Margaret told me when I was just a young thing. She said there will come a time when you look at your music collection and the majority of it will be from a certain era, specifically, a time when you were young and had tons of money to burn frivolously.  I thought that was the worst thing imaginable. So here I am 10-15 years later, still listening and buying music so that I never become that person. Coming home on Saturday I was inspired to create the above image. Do you still buy CDs? Feel free to gank the image and use it anywhere you like. Wave your CD-buying-flag HIGH!

The mixed tape is an obsolete art, replaced by mixed CDs, only to be replaced now by playlists. 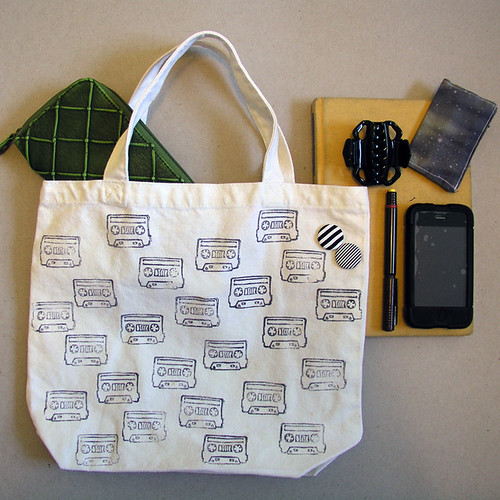 Okay, drumrolllllllllll. The winner of the mix tape bag is Mindy Heindl. Congratulations Mindy, I sent you a facebook message. Send me your address and the bag will be on its way to you soon. If Mindy decides to opt out for any reason, I will draw another name and post it here. I liked this giveaway and think I’ll do more over at the facebook page.

4 thoughts on “And the winner is…”