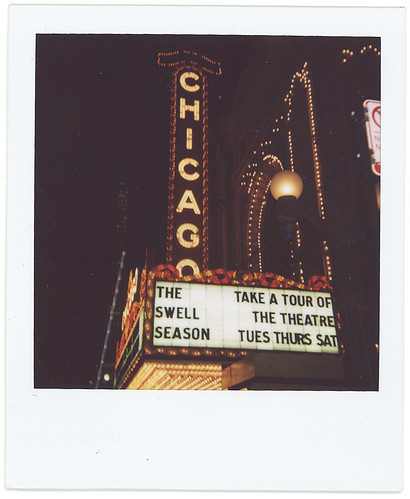 Today I can proudly say, I stretched beyond my comfort zone. I represented myself as an artist publicly at a local event. The results were positive and I am proud of how I was able to discuss my work with confidence. I look back just a few years ago, when I was still pretty fresh out of college, and I see a huge difference. I have grown so much as an artist just by taking similar baby steps.
Last night we had a great time at the Chicago Theatre seeing The Swell Season. Honestly, it was such a great show. From my experiences going to Ireland and numerous Irish festivals, it is so like an irish musician to tell plenty of stories between songs and Glen Hansard’s stories were especially memorable and meaningful. If ever I’ve been to a show and wish I could later buy it on DVD, it would definitely be this show.

You really had to be there to understand a lot of these things, but I’d like to remember the folowing:

-His analogies that songs are like soccer balls and children and you hope that they go out into the world and become successful, make you proud and hopefully bring you back a lot of money ;) and that after that success you are 99% thrilled and 1% just wishing you had your soccer ball back.
-Sometimes to get what you most desire, you must turn away from it and go in the opposite direction before you can reach it. Imagine you are on a globe and the only thing that separates you from your goal is a wall which you can not climb or dig below. If you turn away from the wall and walk in the opposite direction eventually you will reach the opposite side of the wall and your goal.
-They performed a song called Happiness and asked the people to sing along, but only if they truly felt and meant the lyrics which were about letting go of someone with only the most positive and unselfish motivations at heart.
– Glen shared a story about a friend with connections to the spirit world. The part of the story that inspired a song was that two lost souls saw two specks of light. When they traveled towards it they discovered those lights were behind someone’s eyes, looking out.
-This little boy happened to be in the audience and was called to the stage to perform this song for all of us.

One thought on “Over the hump”