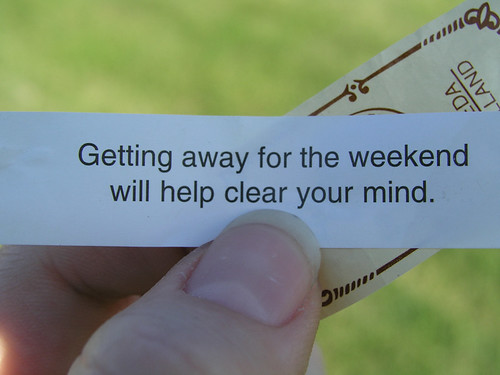 I’m currently hooked up to the internet on a campground in Door County Wisconsin, all because I have the bestest boyfriend ever that enables my internet addictions. That’s okay because it is a symbiotic relationship, he keeps me around as mosquito bait and I already have a half dozen bites to prove it.
Yesterday was the first day of my mini vacation and it started off quite rocky.
Instead of being jazzed to be on vacation I woke up sick to my stomach with nerves and a pounding headache. I had so much stuff on my mind and so many things to do before we could actually leave, but because of the nerves I felt like I couldn’t get anything done. I’ve discovered that when I get really edgy and worry a lot exercise is one of the best reliefs. So instead of packing I hopped on my bike and went for a long cruise.
I was feeling much better upon my return and I decided to make a call I’d been putting off for quite sometime. I’d had this weird feeling about
our reservations in Door County and so I just wanted to call and confirm that things were still going to plan. This is when all hell broke loose.
Turns out my fears were not unfounded. The reservations I made months ago for a cabin somehow were switched for an RV and all the cabins had been booked up. I had a complete meltdown
at this point. I kid you not. At one point I just felt I couldn’t take it anymore and laid down on the ground to just cry.
Fortunately Matt was very supportive, didn’t point out my ludicrous behavior and comforted me until I realized that I need to stop acting like a big baby.
I just decided to stuff my disappointment down, finish packing and get on the road.
On the five hour trip up we drove through a crazy storm with hail. Rain was coming down so hard that drivers were pulling over to the side of the road and motorcyclists were all taking refuge under the overpasses. Afterwards there was a beautiful rainbow. I saw a deer about 15 feet away from my window. Numerous large birds, including hawks and what might have been a falcon and also a possible turkey buzzard. I also saw something that made me incredibly sad. We drove by one of the many dairy farms and matt said “cheese cows” and I said “milk cows” and immediately after the cows there were all these structures that looked like tall but skinny kennels with tall doors, and inside each door, from the highway, I could plainly see
baby dairy cows. I thought that was weird, why would they keep baby cows in such tight quarters. And then Bam, it hit me, but I thought
“it can’t be true, those were dairy cows, and why would people use dairy cows for veal”. Matt looked it up quickly, using google on his phone and as it turns out, Veal comes from baby dairy cows. You’d think it would come from meat cows, but nope. Sad but true. Now, the question is, why would that farmer, with the stigma that veal has, advertise the abuse of baby cows for everyone to see from this major highway. He could have simply had the openings of the kennels turned away from the highway and no one would have known what was inside. Okay, I’m not a vegetarian, so really I have no room talking, but it just made me sad.
Anyway, so we made it up to Door and today we will explore and have fun.
One last thing: before we left town we bought a kitten! I’m so excited, and he is exactly what we’ve been searching for in a kitten for weeks.
We had very rigid requirements. Must be multicolored (that was my requirement), male, long-haired, and super affectionate, including loving to be held (matts requirement).
And we found exactly that, and matt has named him Bishop, after the chess piece.