So, my dad made it through surgery, thank you for anyone who thought positive thoughts and/or prayed for him. Now onto recovery and 6 months of physical therapy. The above picture is a quicky collage of photos I put together of everyone waiting in the hospital room while my dad was in surgery. (L-R) My sister is lying on the hospital bed and dacia and my brother were sitting behind, my mom is lying down in the lounge chair/bed and matt is looking my way.

It has been a very stressful week because there have been several hang ups along the way, including blips that showed up on EKG concerning Dr.s about his heart, heart stress tests, a 4 hour surgery and now he has been running a fever and has lost feeling in his right foot. He has diabetes, so it all adds up to complications in the healing process.

I think he checked into the hospital on Wednesday, surgery was finally okayed on Thursday and performed that night. He seems to be in good spirits considering that he has just had a huge surgery performed, been poked and prodded for days, and constantly surrounded by family and staff all in a hospital room. The hospital was just built and so the rooms are VERY large, modern and comfortable, but still, nothing is going to be as comfortable as your own home. Well, maybe a room at the hilton :) as I discovered last summer. 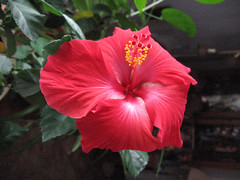 Yesterday morning I ran over to my parents’ house to pick up some essentials for them at the hospital. When I got there I saw this flower in bloom. It was beautiful and full and a wonderful thing to see after several very stressful days. 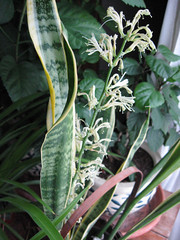 Here is another plant flowering at their house currently and it has a funny story. I got this plant from my old boss’ on my 17th birthday and it has never bloomed ever before and I am 30 years old now. My mom or sister saw it flowering and looked it up. Apparently it is called a Mother-in-law Tongue or Plant, because when it does flower there is a liquid that drips from the blossoms. This liquid could then be placed into a tea and served to your mother in law and it will silence her as it paralyzes her vocal chords. Yikes! Funny thing is, as long as I’ve had it I’ve thought it was some sort of aloe plant and I’ve always thought aloe plants were so cool because you can use them for medicinal purposes. Who knows what would have happened if I had ever tried to use it in that manor.

I just had a call from my mom and he sounds like he is doing really well. I wholeheartedly believe in the power of positive thinking and prayer. I would just like to thank anyone who kept him in their thoughts and would appreciate your continued support and prayers.