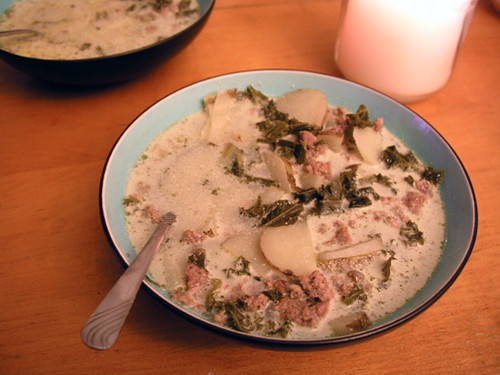 With this season comes comfort food. I am sooo not a cooking person and I know last week I posted about making scones, but don’t worry, this blog will not become a food blog. But I do want to share a recipe for soup that Matt and I find ourselves making often.

Just because I don’t enjoy cooking doesn’t mean I can’t, I think of myself as a good cook actually. I’m confident enough that often times I can throw in handfulls of this or that and not worry about measuring cups. When we cook, we cook a huge crock pot full and we’ve made it so many times that the recipe is no longer exact. My recipe has been more than doubled and modified from the Olive Garden Toscana Soup recipe, found in this book here. A slightly modified version of the original recipe can be found all the way at the bottom. The original recipe as well as the soup you get when at the restaurant are more soup, less ingredients, but we like more of the other ingredients and you can see from the picture it looks more like a “chunky soup”. We’ve also discovered that the leftovers actually taste better than the original serving, probably because it has had more time to “marinade”.

The ingredients I buy:

In a skillet cook up the sausage thoroughly. Remove excess grease. Chop up the kale and potato. I slice thin (less than 1/4 inch thick) of the potato and then cut slices in half. The kale I usually just strip from the stem. As it cooks down it tears apart, so worries about pieces being too big. Place vegetables into crock pot. I put the vegetables in first because they are the part that require the most heat and need the most amount of time to cook thoroughly. Then toss in the sausage and then start pouring in the broth and cream. Put it on high and then cook it for about 4 hours. Depending on your crock pot you might need more or less time, but the way I can tell is by testing the potato and the kale turns black.

Edit: I understand some people need more of an exact recipe so I’m posting more specific ingredients and measurements for a regular sized batch below, slightly modified from recipe in book.

Combine the broth and cream in a saucepan and heat. Cook meat and add to the soup. Slice unpeeled potato 1/4″ thickness and add to soup. Add Kale. Add red pepper and simmer for about an hour.
Serves 4 cups of soup or 2 bowls. Once again, and same as above, you can tell when the soup is done by testing the potato and the kale should be more black than green. It can be eaten immediately, but I highly recommend putting the soup in the fridge overnight and reheating the next day. It’s the only way we do it now.

Edit again: VEGETARIAN EDITION – WOOT! Matt has been a vegetarian since 2012ish. This recipe was one of our favorites and it took us a while before we found good vegetarian replacements, but once we have, it’s been back in regular rotation. Matt’s favorite part has always been the potato, and my favorite is the kale, but we both LOVE the soup part as well, and this vegetarian version does not disappoint. Follow the recipe, the same as above just substituting the following parts.

BROTH Can I just say quickly how most vegetarian broths are HORRIBLE and taste like expensive dirty water. Once we discovered Better Than Bouillon No Chicken Base, there was no going back. Before finding it I thought how hard is it to boil some vegetables, strain them out, and add a bunch of seasoning for flavor. I was just about to start trying to make my own when we found the Better Than Bouillon brand. The resulting soup tastes exactly the same to me.

MEAT ALTERNATIVE  This took a while for us to work out the kinks as well, as most meat substitutes become water logged, squishy, or even dissolve in soups, blech. Yves Veggie Ground is the best alternative we’ve found, and keeps a firm consistency like sausage. As it is not “spicy” we will cook it with additional red pepper flakes before adding it to the crock pot. If you are not into meat alternative, just skip it altogether. We tried this for the first time recently and it all still tasted wonderful, but I do highly recommend cooking it one day, refrigerating it over nigh and warming it up again to eat on the second day. The difference in the taste in the soup is night and day.

Cream We use regular cream because Matt is vegetarian and eats dairy, but I did a search for vegan alternatives for heavy cream and found a variety of options. I like this article from Food52 where readers have offered options like coconut milk (personally, I don’t think I’d start with this because of the added coconut flavor), but would try out the combination of vegan sour cream and dairy free milk. If anyone has any recommendations for a proven heavy cream alternative, I’m all ears, leave a comment below.

Full Disclosure: Some of the links above are Amazon Affiliate Links

One thought on “Zuppa Toscana Soup Regular and Vegetarian Version”