15 Day Drawing Challenge and other challenges as well!

I’m late jumping into the project, but I wanted to participate in Amanda Wright’s (from Wit & Whistle) 15 day drawing challenge. She created a list of 15 different things to draw, and here are my first 5 days. 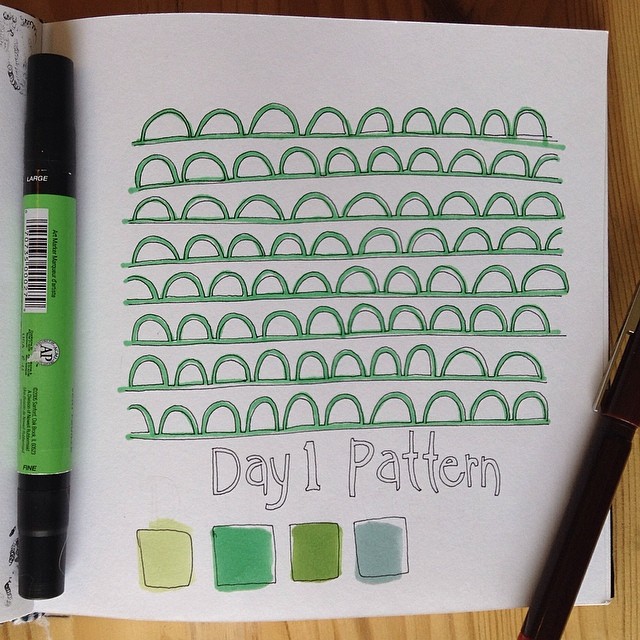 Day 1, a pattern, when I see these scallopy patterns this direction I think of grassy knolls, kind of like the portrait I did of my rabbit Theo 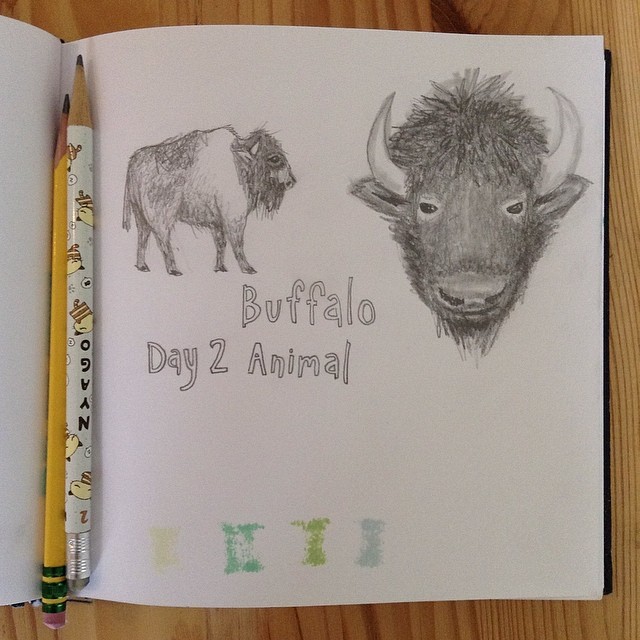 Day 2, an animal. Earlier this Spring, Katie shared a “What is your Spirit Animal?” quiz and I was pretty excited to receive American Buffalo. 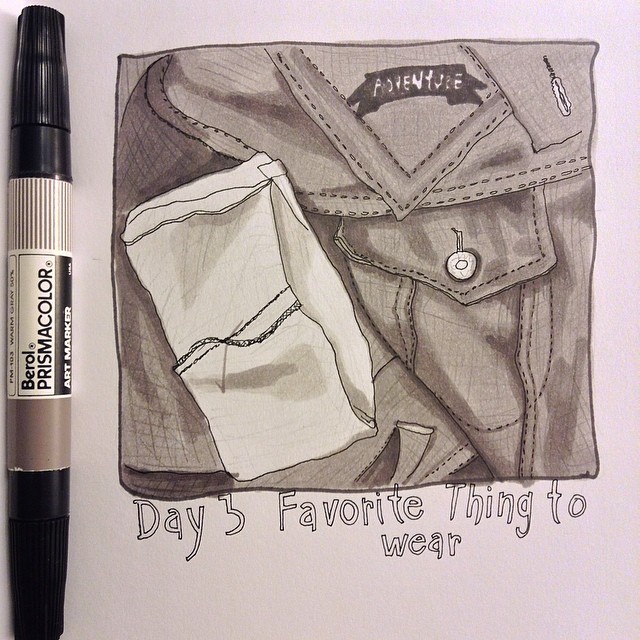 Day 3, a favorite thing to wear, naturally a jean jacket 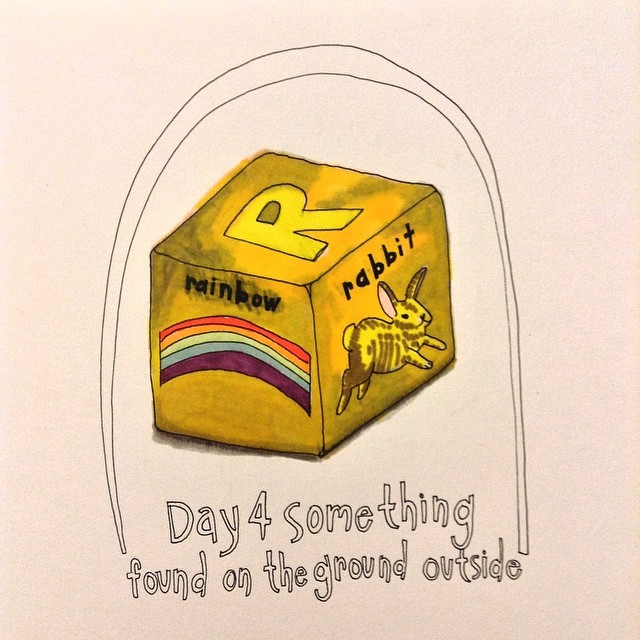 Day 4, Something Found on the Ground Outside. Just when I had been trying to pay attention and find something interesting on the ground whenever I was outside, my Sister in law and nephew invited me over to give me this wooden, children’s alphabet block that they found on the ground at the park across the street from their house. It had Rs on it and all things that begin with R, like rainbow and rabbit. It was meant to be! 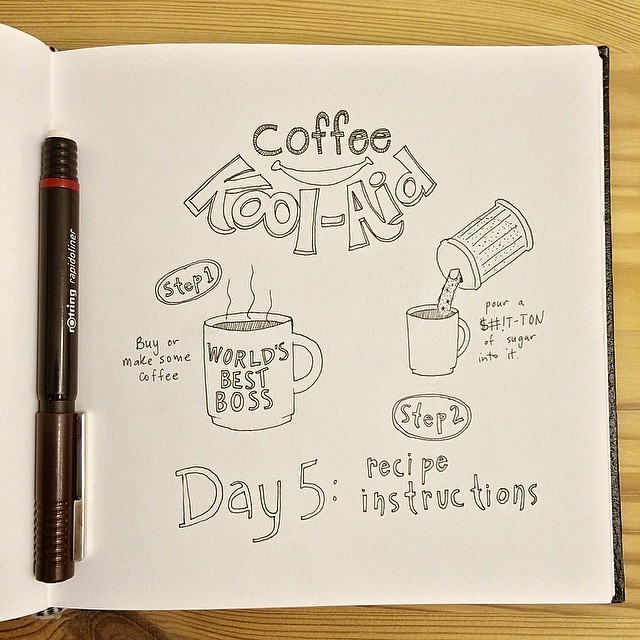 Day 5 took me forever because, if you know me, you know I’m not that inspired by recipes. Finally this very cheeky recipe popped into my head for Kool-Aid Coffee. I’m pretty sure I coined the phrase. I’m not a coffee drinker, so when I do drink it I have to put so much sweetener in it that it resembles kool-aid more than it does coffee. My favorite is going to a family restaurant that has those sugar dispensers like the one I drew above, where the sugar can just keep coming and coming and coming and you don’t have to feel guilty or have evidence of all the sugar you used from empty paper packets all over the table.

I think I must have taken a first real look at Wit & Whistle after seeing her in an issue of Stationery Trends (btw, this has seriously become my favorite magazine). Earlier this year I went back through her archives and read her ENTIRE BLOG. That is how smitten I am. Funny enough, I later realized I had seen her work before because I found something of hers I had pinned on pinterest.

I wanted this Wit & Whistle stamp so badly, so I basically spelled it out to Matt that he should get it for me for Valentine’s Day, he’s not one for subtle hinting, and so it worked. I still haven’t even used it, it’s on display in my knick shelf wall, I love it so.

I love Amanda’s work and her blog and it was so great to go through her archives and see her develop in her unique vision and style. She posts regularly, and I look forward to her updates. She, along with my new love of Stationery Trends, has really inspired me to really invest and hone in on developing a cohesive paper product line.

I’ve held onto something she shared on her blog, that was one of those ah-ha and OF COURSE! moments for me. She was doing another challenge where she was trying to improve on her hand lettering skills. It’s something I would love to do myself, but whenever I’d sit down to try and do anything it felt so hard and I would always just resort to the couple “fonts” that I know and have memorized. More than once I just admitted to myself that I just didn’t have that skill for hand lettering. Well, in Amanda’s post she shared that she also really struggled with it (which was great to hear because I think of her talent as being so perfect and natural) but that with regular practice it was becoming easier. Simple, right? Work hard at something and you may just improve, who knew? I KNOW that few seemingly natural born talents exist and that plenty of hard work and talent will result in improved skills, but why do I fall into thinking otherwise so readily? Well, when I was in college and took my very first Art class, the teacher shared how art and talent and skill are things that artists have to hone and WORK HARD at, still there is this common misconception that art comes natural to some, and most people are born with it or not. But that is not true, and so he showed us slides of early artwork from artists while they got better and developed their craft. This was a big thing for me because I realized I thought that, and I think I was educated in that same belief and incorrect logic, but fortunately I was amongst that group of students that was told that I just had it, so that enforced and encouraged me to spend time and have interest and work on artwork, where other children just give up. It was something I learned even more about later in art education courses, that at a certain age children start looking around and comparing their work to their classmates and if they don’t feel good about it, they just give up and quit. So, even though I know better than to just expect things to come easy to me, I still fall into that trap occasionally. Amanda’s little comment provided me with a much needed reminder and nudge that if I want to do something, and if it doesn’t come easily at first, that I need to keep pushing and trying at it and not give up so easily.

3 thoughts on “15 Day Drawing Challenge and other challenges as well!”