Apparently I needed a break, even from August Break. This summer has been so happily busy.

Earlier this summer Sheila (I’m still working on a post about her visit) revealed to me where I could get minnetonka’s on the cheap. Now I want a pair for every day of the week.

On Saturday my family went to Jonamac Apple Orchard, and I’m not sure if the kids area is always open and free or if it was just because it is early enough in the season, but we had a GREAT TIME! There were so many fun activities. This picture pretty much sums up what it’s like to grow up in DeKalb, ha! Okay, maybe I’ve never swam in a silo filled with corn, but apparently this wasn’t unusual for his mother who grew up on a farm.

On Sunday, Ann (of abeautifulparty), and I went to Chicago for a Makers Mini Conference at Lillstreet Art Center. Afterward we signed up for an additional class taught by Esther of Essimar (Absolute Sweetheart!) and made these lovely paper ornaments. Ann wrote about the experience on her blog here. Also, Esther told us that the paper ornament project was selected by Whole Foods to be one of several crafts that will be printed on their paper bags (perfect because you can use the paper bag to make this craft).

Monday I had to work overnight as it was the beginning of the semester and the person who normally does the shift was away. I used to have to do that Sunday night shift every week, and it was hellish and thank God I don’t have to do it anymore. When I finally did wake up on Monday I got showered and dressed and took this picture. Do you ever see a picture of yourself and think “that doesn’t look like me at all?” That was this picture for me.

We’ve been watching the TV show Broadchurch, and shhhhh (and no spoilers) we just finished it last night. If you like the Killing you will like this show. This picture was a capture of Matt snuggling with new cat Fionna while we watched Broadchurch.

On Thursday we walked to Eduardo’s (as we are often wont to do) and passed this tree with a feather beautifully placed above this keyhole tree knot. I don’t know if the feather just happened to fall there or if someone placed it there, but it was beautiful all the same.

Since getting my fitbit I have been doing really well to get in at least 10,000 steps every day. I only missed two days when I was preparing for the Travel Writers Conference and selling at the Conference last week. But, I am slowly making up for those lost steps. I can’t tell you how much I enjoy the fitbit and wish that everyone I know had one too, so we could be friends on the fitbit site. Many days I end up having to make up my final steps on the treadmill, and walking for an hour now is no biggie anymore. I’m feeling great mentally and physically and I know that has so much to do with the fitbit. (Thank you again Chris, for the early birthday present!)

So, that is week 4, there will be just a few days in the week 5 installment and then it will be back to regular programming, whatever that is. 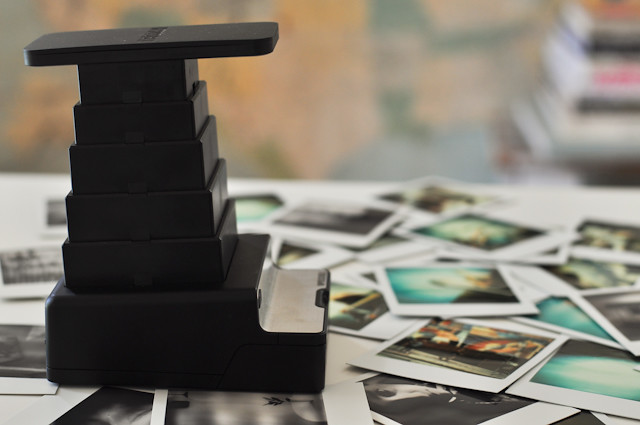 picture by Andrea of Hula Seventy

Quickly before I leave I wanted to share with you a post (since all of my August Break pictures are instagrams). Andrea from Hula Seventy (one of the sweetest, loveliest and most creative folks out there) posted this week about the Instalab, which was a kickstarter. I remember seeing it on kickstarter and just thinking it was a Daylab but just specific to Impossible Film, no biggie. Turns out, it allows you to turn your instagrams into real film (polaroid style) pictures! Beautiful! Talk about kickstarter, I’m kicking myself that i didn’t back that project.