Don’t forget to enter to win a chalkboard ring or treasure box. Leave a comment on the previous post. You have until March 31st to enter. 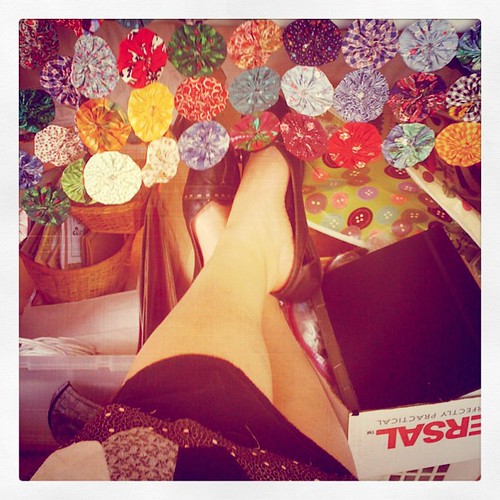 Last weekend I did my first craft show in several years. It was the first show for this particular event and there weren’t too many shoppers, yet it was by far the best show I’ve done so far. The picture above was a “back stage” shot. I always use my yoyo quilt as a table topper and I think it helps draw a crowd, although our (my mom, sister and I) tables were pretty packed, so there wasn’t much of the quilt visible. 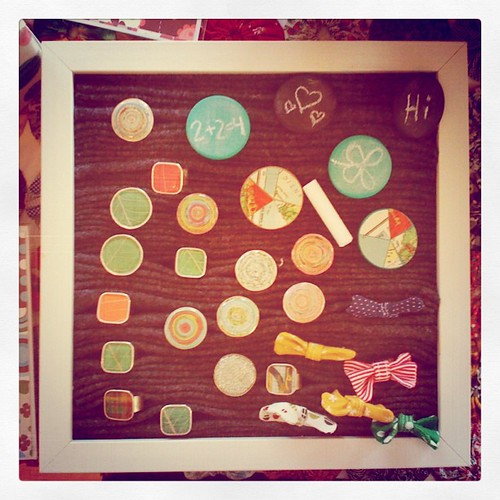 Above is the ring display I made from Rosa’s tutorial. Usually it holds my own personal collection, but I used it as a display for the craft show.

It was the first time I’ve been able to take my coin/capsule machine out. I filled it with little handbound books, vintage map buntings, jewelry, scrappy leaf keychains, felt fortune cookies with coupons for my etsy shop, and candy. While I made pieces to put in the capsules I envision that the people who would want to buy them would be people like myself (grown-up that still likes toys). It wasn’t until later that I realized that there would probably be plenty of children at this event and as I remember from being a kid myself, gumball machines are like magnets for kids. Sure enough, all the customers I had on the machine were little kids. It was so cool to see their excitement, at an event that was not necessarily “for kids”. They’d see it and their faces would light up and then they’d start yanking on their parent’s arm for quarters. There was only one kid who got something handmade that actually wanted candy instead and I was happy to oblige and open the machine for him. The rest of the kids were all so thrilled to get their handmade treasures. One little boy got candy and was so sad because he wanted a scrappy leaf key chain, so I traded him up. Another little boy bought a vintage map bunting, when I asked him if he would prefer candy instead, he said no. By the time they left the show I noticed he was wearing his bunting as a necklace.

Have a great weekend, everyone!