What did you do this weekend? This weekend I made a mess. The picture below is result of my creativity. 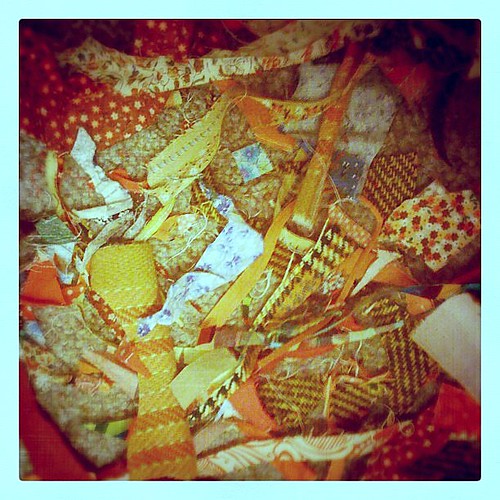 This weekend I saw this post on the Craft Blog.  I thought these scrappy leaf key fobs were super cute and I wanted to buy one right away, but when I went to the link it was for a pattern to make your own, offered in the etsy shop of WhereTheOrchidsGrow. I was kind of disappointed, because it was cute, but I’d rather someone just make one for me. I kept thinking about the pattern, and read that she gave purchasers the right to sell them. I had the idea that they might be something cute and small enough to fit into my capsule coin machine and so I decided to buy the pattern. Funny enough, it wasn’t until after I had the idea to make a bunch and then purchased the pattern that I read the WHOLE product description and found that she does also sell already completed keychains. It worked out perfectly anyway, because I was able to make all of these: 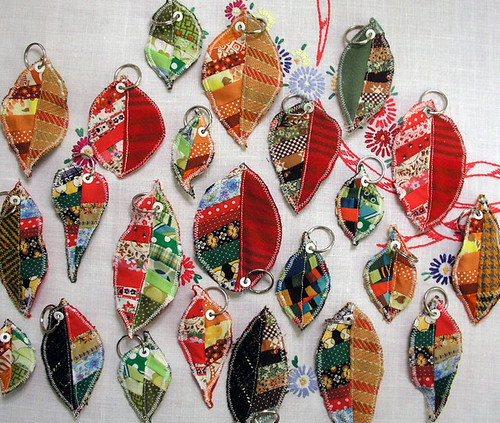 I sewed while watching shows on hulu and then the season finale of Downton Abbey (which Matt had so kindly downloaded for me weeks ago from the BBC). I used fabric from this big, HUGE bag of scrap quilting fabric from my mom. I also altered the design a little bit, using wool felt for one half, and for the backing as well. They went a lot quicker that way. I already had some eyelets and keychains, so it worked out perfectly. I thought I might remove the keychain and turn some into cell phone charms. 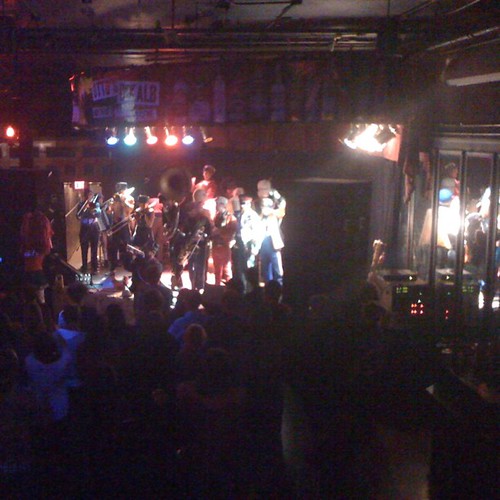 Last night we went with our friend Tom to go see the band Mucca Pazza play at Otto’s. The local newspaper described them as a 30 piece punk marching band. I figured it would be an experience to witness. Looking them up beforehand, I saw that they had played at all the well known clubs in chicago and apparently they were even on Conan O’Brien in 2006.

Here’s a random video I found on youtube, of Mucca Pazza performing, just so you can get an idea. They played this song last night.

There were two opening bands and it wasn’t until I dragged Matt there that I realized he has a bad back, and although he can run a 10K like nobody’s business, standing for long periods gives him great pain. Tom had the idea of seeing if we could pull some strings by association and sit up in the private balcony (like we used to do when he use to work there and when my sister-in-law’s family used to own the place). They gave us the go ahead which was awesome, but also told us not to let anyone else come up, and definitely no more than 6 should be up there. Wouldn’t ya know, when the band came out, a small handful climbed the rickety stairs to our balcony and started playing from up there, making it more than 6 up there. It should have been awesome, but all I could imagine was that the balcony would collapse and we’d be headline news the following day.

We survived and the band was awesome. Not only did they fill the entire stage, but they were often marching around in the audience, sometimes in formation. It was a sight to see for Matt and I, who both marched in bands before. It was a great show and I was very glad at the opportunity to witness it from above like we did.

3 thoughts on “Making a mess today”