While our friend Tom has been traveling, we have been watching his dog, Benny, off and on. Benny is a tiny white maltipoo that actually belonged to my friend Nikki, who passed away earlier this year. Actually, if you click on that link to her caringbridges page, the first picture that pops up is a picture of Benny wearing a coat that I made for him. 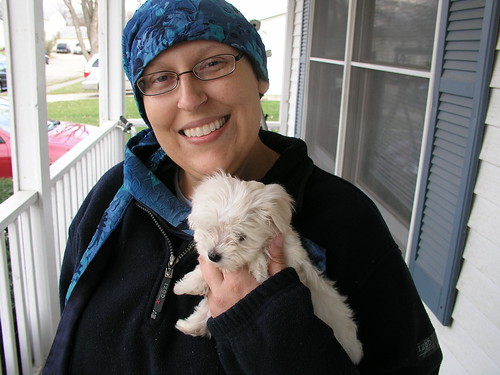 As long as I knew Nikki she wanted a dog. She was definitely one of those children that stray animals follow home, and she had a huge heart for all animals. I was just recalling on her facebook page about how we’d often drag the guys with us to different pet stores and ooh and aah at all the animals we wanted to take home with us. It wasn’t until just months before she passed that she finally got her dream pet. I think Tom and Nikki showed up one day at our door with this little tiny poof ball (pictured above with Nikki on our front porch). Benny wasn’t even 2 pounds yet and could hardly be taken seriously as a dog. He looked more hamster or even muppet. Even now, I think he weighs under 5 pounds and is still more muppet than canine.

Here’s a little video I recorded of him earlier today.
While Nikki was sick, especially while she was doing treatments, I liked to send her picture or video messages that I hoped would brighten her day. One of those last messages I sent her was a cell phone video I recorded of Benny when he was a tiny puppy and she responded that “he just made her so happy”. She loved him so much and so because of that he is important to me as well.

Today I took Benny outside and while he ran around I noticed the beauty of his fur. He’s a white dog, and while Tom bathed him right before his trip, he is now a pretty dingy dog. That’s okay because it makes for good texture. Maybe it’s just the fiber enthusiast in me, but I had to run in and get my camera. Right there in the lawn I started snapping shots of his hair until I realized that they would make a wonderful collection of mailart pieces. I adjusted the photos, then printed them out from my inkjet printer on cardstock. Since I used the inkjet I was able to create a watermark on each card in the lower righthand corner that had a heart and Nikki’s name. I then spray fixed each card so it would be safe to go through the mail. 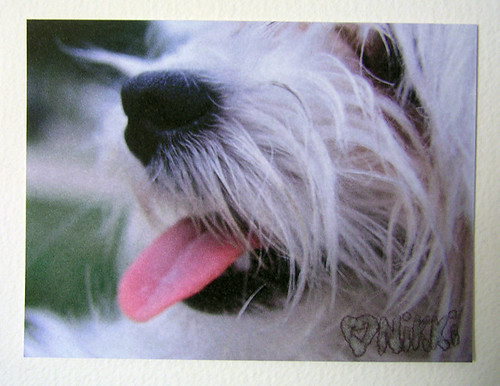 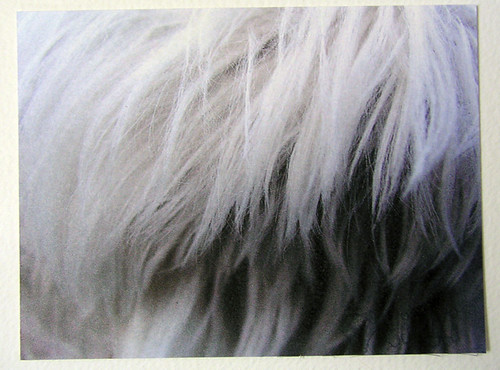 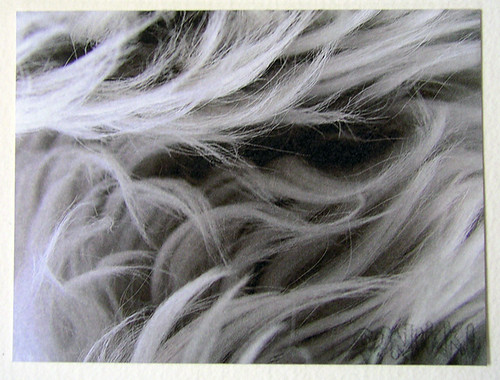 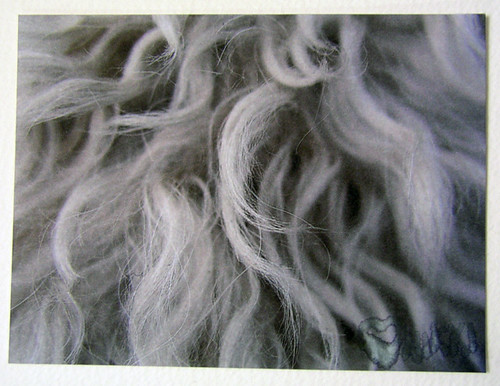 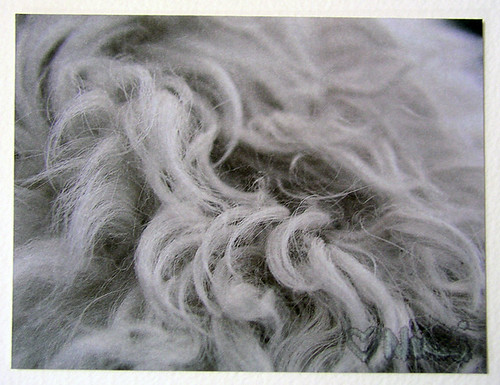 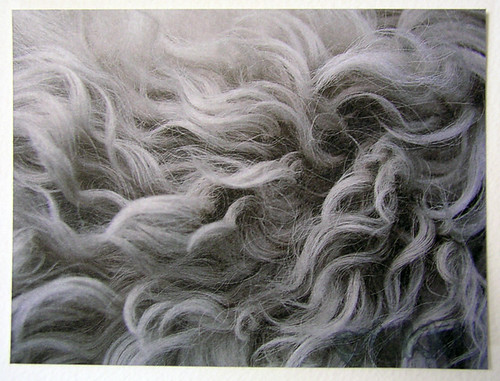 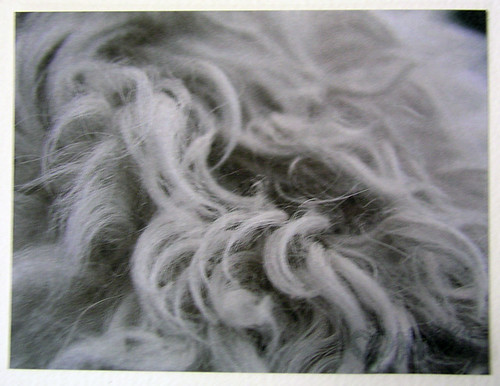 I’d like to share one last story about Nikki because I think it shows how compassionate she really was. While she and Tom were away for a period of time (maybe treatment, maybe honeymoon) one of their cats stopped eating. Apparently, stressed and lonely (although they were being fed regularly by a family member) Nikki’s cat Otis went into her closet and just stayed there and stopped eating. When they returned they found Otis completely emaciated and near death from starvation. Now, if there can be anything funny about this situation, you’d have to know Otis and he is the FATTEST cat ever. So, he was just completely hollowed out and was lifeless. This was quite a shock and they took him for medical attention right away. It wasn’t just a matter of feeding him again though, it was a dire situation where his organs might have even been failing and everyone around told Nikki it would probably be the most humane thing to just put him down. She wouldn’t have it. She ended up spending thousands of dollars, which included care and surgery and a feeding tube and for a looong time after she was having to syringe feed him through a tube that went directly into his stomach from his side. Side note-Otis was actually a kitten she rescued. He also had a litter mate named, you guessed it, Milo, but Milo didn’t survive kittenhood.

I came over to visit once shortly after everything that happened with Otis and she told me the whole story. All the while Otis was right between us, on the couch. I understood her love but even I questioned if it was the right thing to do because through it all his eyes seemed vacant and I wondered if he might have even had brain damage. He was completely unresponsive to us for the duration. During that conversation she told me something that I will never forget: She said that even when everyone was telling her to let him go, and even after they weighed the price with the probability of survival, and even if he didn’t make it, she said that she would never be able to forgive herself for not even trying. Money was tight, but down the road anytime she would need to buy something for herself she knew that she would think “I can spend money and buy these new shoes, but I couldn’t afford to save my cat.”And wouldn’t you know, slowly but surely over time Otis came back to health. Not only did she get him back to normal cat size, but he once again returned to fat cat size. He is the same affectionate and friendly cat today as he was before and it was all due to Nikki’s persistence.