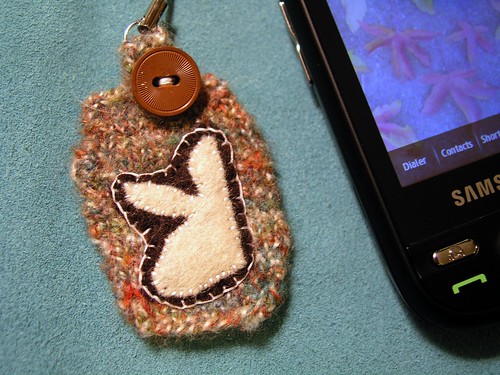 I had a bit of difficulty with this piece. I originally started with a silhouette of a rabbits entire body, but it was so small and so many areas, it was really getting distorted and lost, so I redid it as just the head. I was not too far into it when I suddenly realized it’s likeness to another very recognizable logo, ahem, that I wasn’t trying to align myself with. Honest, I was actually thinking of my old pet rabbit, and using this picture as a reference http://www.flickr.com/photos/robayre/66909244/. I finished it anyway. Now, after completing it, I’m not sure if it even looks like a rabbit. Well, it looks like a rabbit if I tell you that’s what it is, but if you didn’t know that first, would you recognize it?

Anyway, the rabbit is made of a tan wool felt, sewn onto a dark brown poly felt, then sewn onto a wool handspun, handknit swatch, that was then hand felted by yours truly. The completed piece is way bigger than I originally intended it to be. After cutting out multiple profiles, sewing and then ripping many times, and knitting and felting multiple backgrounds, I decided it was good enough.

This concludes the August challenge. I look forward to finally finishing reading the books I’ve started, doing some much neglected laundry and dishes and maybe even cooking some real dinners again. That’s sounds pretty pathetic, lol.