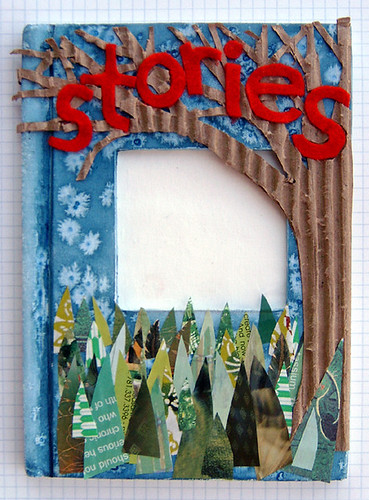 I signed up for Kara Haupt‘s online class “Summer of Love” and then promptly missed the first several days. I swear the class didn’t start until next week, but I decided to sign into the group blog to see if there was any early action. Imagine my shock and sadness when the first post that pops up says “Prompt Day Three”. Argh.
Oh well. So goes my life.

Any way, one of the main projects to make an altered book and all of a sudden I remembered this book I made back in 2007. It was for a huge group swap, where tons of artists were involved. Each person was to make a book and then pass it to the next person on the list, do a page in the next book, then pass it down the line. By the time your book would come back to you it would be filled with other people’s artwork. Cool huh? Yeah, well, it turned out to be not so cool. I made this totally kick ass book, above. I still think it’s awesome and still represents my style, check the grass. Anyway, I sent it to the next person in line, got the next two or three artists books, worked on them and sent them down the line. Turns out the girl after me in line, I think her name was natalie, was a total flake and scammed all of those books and never sent any out. It wasn’t until that point where the person that was behind Natalie was getting worried that she hadn’t received ANY books, when the group realized what was going. Needless to say I lost my own book, but then I felt even worse because I also sent other artist’s books to her as well. Man, that really hurt.

Moral of the story. Don’t be lame and flake out on others.
Also, pay attention to the calendar. I feel sort of like I’m living one of those dreams where it’s finals week and I just realized I forgot to go to class the whole semester.

3 thoughts on “Summer of Love”