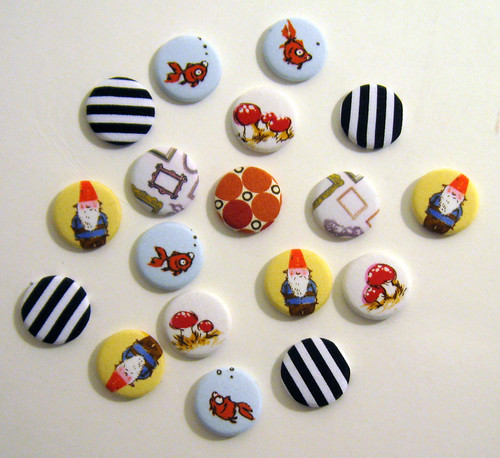 Today I made all sorts of fabric covered pinback buttons for thing-a-day. Just for fun, I will send a button to the first three people who leave a comment here and tell me which button they like best.

I woke up this morning to my bed shaking. I laid there while I wondered what was going on, turned over and watched the rattling windows then contemplated if I should run to the doorway, the bathroom or downstairs. Decided to just lay there. After everything stopped shaking I went downstairs to see if we had an earthquake. At first I couldn’t find anything, but as I refreshed the pages then it finally popped up. Sure enough, we had a 3.8 earthquake which very close to my city. On the radio this morning they were talking to some “expert of something or other” and she put it this way: “As long as it’s just a small earthquake and no damage was done, the result is just a little bit of excitement.” I was sad because Matt was playing video games late last night and ended up falling asleep on the couch in the basement. He’s a deep sleeper so he missed the whole thing. If he had been in bed you better believe I would have woken him up.  Today the most frequently heard thing was “It sounded like a snow plow ran into the house”.

Okay, off to bed.