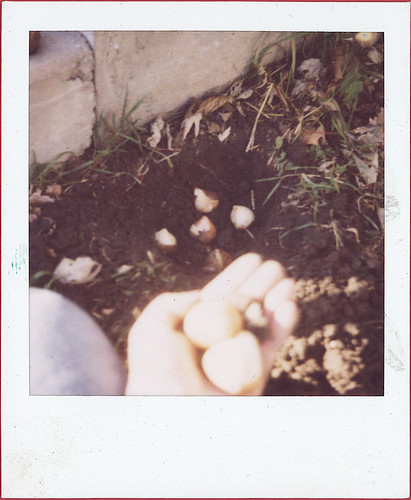 It’s is Polaroid Week 2009! I’ll be posting a new Polaroid picture each day this week, Monday through Friday. I posted about it over at HelloCraft.

This morning I started browsing through my collection of Polaroid cameras looking for one that might have film left in it. None of them did and this triggered panic. Reality hit for the first time. I might never be able to buy Polaroid instant film ever again. I knew I had at least one film pack left in the basement, but I immediately started kicking myself thinking “WHY DIDN’T YOU STOCK UP WHEN THEY ANNOUNCED PRODUCTION STOPPED!”

When they originally announced that Polaroid halting production of their instant films I wasn’t worried, I had tons of boxes of film still. I continued to take pictures frivolously as if each film pack was like water and would never run out. Deep down inside I thought it was just a threat and Polaroid would never dare to stop making a product that everyone loves, a product that has become so deep rooted in our culture/society and such a huge medium in the art world.

I drove around today thinking, thinking, thinking. This last film pack I have has to last the week and plus some. I’m allotting only one picture a day. No take backs, no re-dos, no multiple shots. Each and every picture might be one of the very last Polaroid pictures ever taken. Ever. That carries a lot of weight and pressure.

It’s beautiful outside today. A gorgeous fall day with blue skies and growing bare trees with the goldest of gold leaves remaining. But is a snapshot of that worthy of one of the last pieces of film? Hasn’t that been done again and again?

I hoped that when the time came for today’s picture, the one that was meant to be, that I would realize it and be able to capture it fully. I kept my camera by my side as went through my day.

I took the rest of the day off work and decided to utilize my day fully. I got things done that I just can’t seem to force myself to do on the weekends. I cleaned out my dead car and went to the post office. I grabbed a box of tulip bulbs that I had purchased as part of my “To-Do list for 2009”. I went outside and put my hands in the earth. As I dug through the cold dirt I realized that this would be the picture. I’ll document this as I cross off an item off my list. A perfect item to document, as planting fall bulbs also carries connotations of death and rebirth. As everything dies and goes into hibernation for the winter, I’m investing in and hoping for beauty in the future/upcoming spring.

Of course, the picture didn’t turn out as I had hoped, and where I normally would have retaken it, this year, I get what I get. So here it is. My first contribution to Polaroid Week 2009. Let’s keep our fingers crossed that Polaroid too has a rebirth and that we can keep it going. If you read the quick Hello Craft article I wrote (linked above) you will find several links to help support the movement. Please take a moment to check those out.

And I’d love to hear if you are also participating in “Roid Week”. Leave me a comment. Polaroidgirl on twitter has created a list (here) of all the people participating, and of course there is the flickr group devoted to it as well.