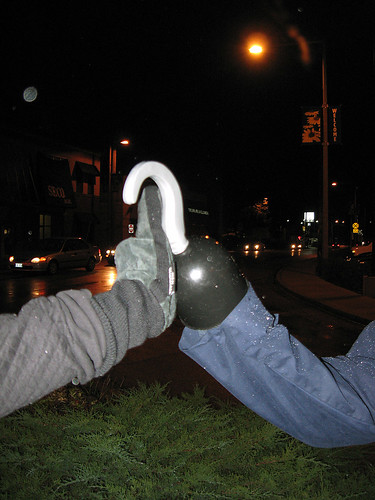 This summer my sister in law came up with a great idea.

There is a lot of activity each and every Friday evening at a major intersection, downtown DeKalb. Since 2003ish there have been two groups of people who stand in support of our country, waving an american flag, and on the opposite side a group of people protesting the war, holding signs.

My sister in law thought of a fun project to lighten the mood, make people laugh and have a good time. We would organize an event where the opposite two empty corners at this intersection would be occupied by Pirates and Ninjas. If you aren’t aware, pirates and ninjas hate each other.

With school out during the summer DeKalb can be quiet, so we decided to wait till school was back in session. With Halloween so close and holiday stores carrying costumes open all around we decided this was an excellent date. Our original plan was to place ads in the classifieds asking all pirates and ninas to show up. With concern for large crowds overwhelming these small and cramped corners we nixed that idea and just sent out emails. 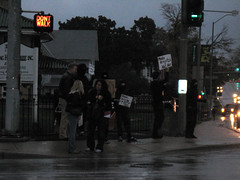 As with the Chicago MP3 Experiment a few weeks ago, the rain dampened the event, but did not rule it out all together. About a third of the people who promised to show up actually made it, but we still had large enough groups on each side to draw attention.

An uninvolved spectator went around to all four corners and spoke with the supporters and protesters and assured us that they found it humorous and let us know which side (pirates or ninjas) they were in support of. 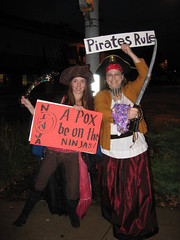 (Pictured above Pirates Connie and Erin)

I was a pirate and I held a sign for drivers to honk twice for pirates. Let’s just say, I think pirates won this battle! We had so many driving by laughing, giving thumbs up, waving and honking. We even tried to fool ourselves into believing that people who were obviously honking for the supporters and protesters on the opposite corners were actually for pirates as well. I think some people deliberately drove by twice to get pictures. I was honestly surprised by how positive it was, and how many people driving by loved it. One car that stopped at the light honked but then rolled down their windows to ask where the ninjas were, lol, they didn’t see them on the opposite corner. 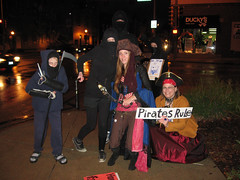 After everything was said and done we had a great time. A few of us (pirates AND ninjas) even decided to get past our differences and join together for a bite to eat afterward. We decided Pirates vs. Ninjas might be a fun event each year. Also, inspired by some of the Improv Everywhere missions we came up with some more fun possible projects for our future. Can anyone say Zombie Christmas Caroling and Huskie Bus Line Party?

3 thoughts on “Ninjas vs Pirates Protestzorz 2008!”