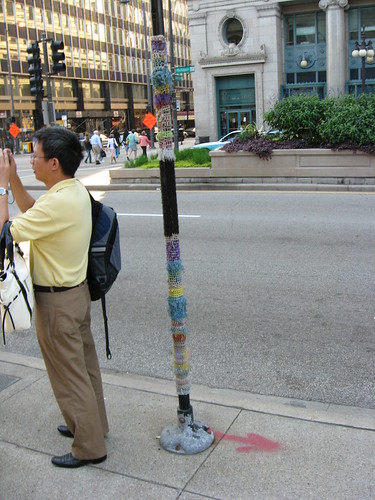 On Saturday we (my siblings and matt and I) finally took our Segway tour of Chicago for my sisters birthday. In 2007 when my sister and I went to lollapalooza we saw people on these tours and my sister was so excited and stated that she wanted to do that for her birthday the next year. Well, her birthday is actually in the spring, and the weekend we planned on going it was raining or booked up. So, we finally did it this weekend. I was anxious and worried that I would wipe out, or that people from the city would harass us as we drove by, but none of that happened. In fact it was the most fun I’ve had in a looooong time. We all want segways now. I wonder how long it would take to return on investment if we bought them and gave tours in DeKalb, lol. “Okay, for our first stop on our left you will see the historic Ellwood house, and thank you that concludes our tour.” 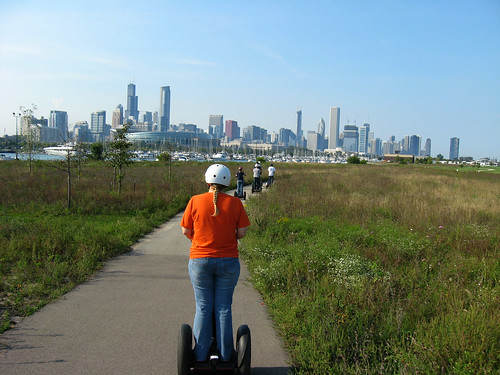 I’ve been to chicago bajillions of time, but I had never known that Chicago had a prairie preserve right near the lake front. We rode all the way from the heart of the city out to this preserve, going through Grant Park, Buckingham Fountain, the Museum District, Soldier Field, Michigan Avenue Millennium Park. It was pretty cool because one person on our tour asked if we could ride around the perimeter of the Planetarium and although the guide had never done that before he was up for it. Only problem the end of the path ends and so we had to climb up a steep grassy hill on our segways. The guide was very nice, but I don’t think he got out of the city often and thought DeKalb was lightyears away, rather than the hour and a half (with traffic) drive that it actually is. He told us about the Chicago fire as if we had never heard of it before. Then when we got to the location of the old Meigs Field he told us about how the mayor went in and bulldozed big X’s in the landing strips in the dead of night. Unfortunately, Daley had not thought things out because all the pilots who had planes there had no way of flying them out and had to disassemble them to remove them, to which my brother interjected: “If my plane had been there this is the part of the tour where we’d be talking about The Great Chicago Fire Number Two.”
On the way back into the city on the tour we rode down Michigan Avenue and passed this (top picture) knitted graffiti in front of the Art Institute. Very cool. I’ve seen a lot of it online, but never seen any in real life. It made me want to do some right here in my own city.
Okay, if you’ve made it this far in the post congratulations. The few of you who have will be sure to check back in tomorrow, a very special day, for the special announcement of my very first contest on this blog. Special day? Yes, you will have to check back tomorrow to find out more.

One thought on “Stay tuned for more”