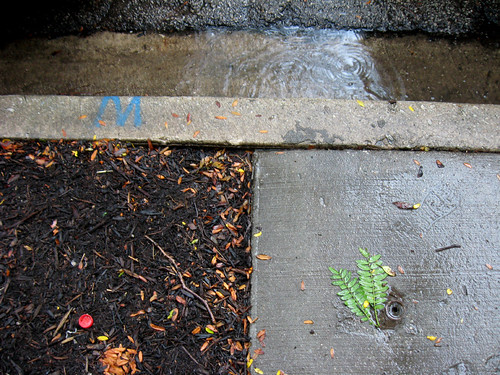 Saturday my sister and I decided to risk it and head into the damp streets of Chicago for the Renegade Craft show. We go each year and it’s something we really look forward to. I checked weather.com before leaving and it forecasted heavy downpour all day, except for a couple hours break where it just rained in the afternoon. We got there shortly after it opened and you could see a few booths were empty or still setting up. Several tents were leaking and most people had tarps over and around their tents. I was a teensy bit glad to know that I wouldn’t have to battle crowds and in all honesty, it was probably the best show I’ve been to so far. Best being defined by the wad of cash we both dropped. By the time we left the shopping crowd was beginning to grow and with everyone holding umbrellas it was starting to get crowded. Also noted: about every other girl there was wearing galoshes. 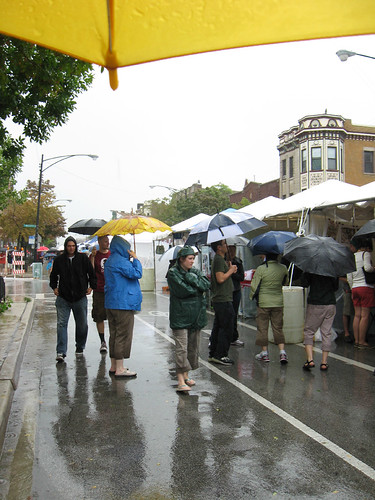 Maybe later this week I will do a post on some of the goodies I got at the show. That would be fun.

Yesterday was then one of those days where I got home drenched and experienced one of the world’s best feelings: Putting on dry warm clothes. Today, quite the opposite. I’ve barely left the house, It’s about 7 p.m. and I’m still in pajamas. I feel so grimy and worse than that, I feel so unproductive. I’ve barely stepped into my studio at all in days.

I’ve been going through this struggle where during the work week I tell myself “I’ll make time to work on things this weekend” and then the weekend hits and I can’t get myself in the mood to do anything then either, so I tell myself “It will be better to do it during the work week in the evenings.” and it’s just this never ending cycle of unproductiveness. Ugh, I hate it.

Sometimes I wonder if it is brought on by my personal need to be doing something always and never taking the time for productive breaks to go out and live and fill up on real life inspiration, etc. When I can’t get myself into the productive mood I just end vegging out in front of the tv or internet instead of perhaps going out for a bike ride or exploring in a park. One can only coast along for so long on empty tank.

Also, knowing that sometimes it takes a bit of time for me to switch gears and actually get into right brain thinking can be a chore on it’s own, especially after a long day at work. Feel familiar to anyone else?

edit: oh yeah, and just in case anybody noticed, I can say I feel like my well of inspiration is dry in this post and in the post directly before this say that the inspiration floweth over because . . . I’m a contradiction, oxymoron, I’m a paradox, as my brother says “Robyn, you’re so torn”. That’s me. Love me or leave me.

5 thoughts on “This weekend”