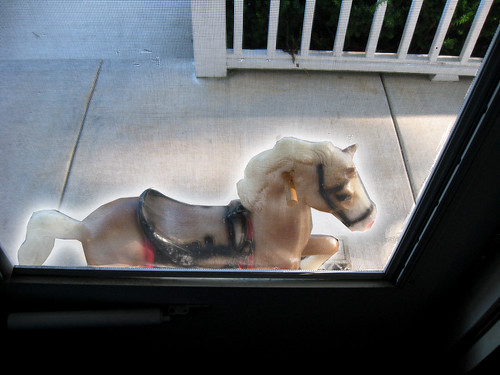 I had a pretty crazy morning.

Once again, I woke up to the smell of fried eggs permeating the bedroom. Since it has gotten warm and we’ve had the windows open at night I wake up to the smell of fried eggs. At first I blamed the neighbors in our duplex, but they’ve moved out and the smell continues on. I mentioned it to Matt and he said he’s never smelled it. This morning, when I woke up to the smell yet again, I thought about Matt’s reaction, and started to worry. What if there really is no smell of fried eggs and it is actually a symptom of a brain tumor? Yes, these are the kind of worries I have. The kind of worries that most people, other than my sister, wouldn’t ever understand. Sometimes the smell is so strong that I almost feel like I could faintly smell it all day long, like it was stuck in my nose. I understand this concept all too well from when I used to change diapers regularly at the nursery. That smell would stay in my nose the rest of the day, and that’s no pleasant smell.

When Matt woke up the smell was gone and I confided him that I was worried about my health. This is when he tells me “My first thought would be that it comes from the nursing home across the street. Yeah, that would be my first conclusion, not that I had a tumor.” Yatzee! It had never occurred to me that we have an almost-restaurant (serving tons of people breakfast each morning) right across the street from our house. Problem solved. I hope. (checking glands and probing scalp)

Next…Matt opens the door to the house and then turns to me and says “Why is there a horse out here?” I think he’s joking, and I give him a quizzical look and he says “I’m not kidding, there’s a horse out here” but then he points down low, so I think he must be talking about a toy, like a My Little Pony. I get up and look out the front door to find this beauty sitting on our welcome mat.

My first reaction was “That’s creepy, I’m scared, somebody hold me”. But then I just started laughing and had to go get my camera. I’ve come across several of these horses before. This is a perfect example of magic in real life…waking up to a springed-rocking horse at your front door. At first I wanted to message a select few asking them to fess up, but then I started thinking that would ruin the magic, so I guess I’ll just let it be. In the meantime I have a magical horse living on my front porch.

THEN, finally as I’m driving to work, I turn to the street I work on and as I pass a parking lot I see this vehicle driving so fast through the lot, heading to the exit that would eventually cut me off. I look over to see who this joker thinks he is and it’s my manager at work and he’s pointing his finger at me. Other than the fact that he was driving a car and not a bike, it totally smacked of Better Off Dead, when the paper boy shows up everywhere on his bike chasing after the main character for his “TWO DOLLARS!”

Now, it’s Monday night and that means one thing, TV night: Jon and Kate Plus 8 and Intervention. I might even work on some stuff while watching TV too…maybe.

2 thoughts on “What a morning”