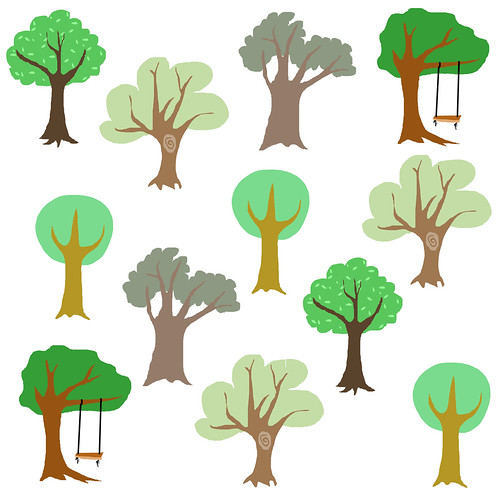 Earlier today I saw this knit piece on flickr and was inspired. I want to knit a vest using my handspun, I’m excited. And then if you notice the belt in that same piece. The pattern is so perfectly suited (small and repeating) for such a piece. It has inspired me to create the pattern at the top of this post to iron onto fabric. I love fabrics with small repeating patterns. Often I see fabrics with the cutest patterning, but it is so big, so if you cut or sew the fabric down you can’t really see the pattern much anymore. So I decided to design this tree pattern where each tree is less than 1.5″ in size.

On Monday, my sister and I went into the city to the Art Institute to see the Hopper and Homer show. Chris liked Homer and I liked Hopper. I kind of had this impression that Hoppers work was all like Nighthawks, and kind of lonesome and distant, but after seeing this show I don’t think that anymore. His pieces really spoke to me because of their interesting and unusual composition, angles and obvious inspiration from film noir. His work is not sad and lonely, but like a screen capture of a story. That being said, my favorite piece in the show was a very simple painting that actually didn’t really have elements that I listed above. The above painting titled Hodgkin’s House, has a pretty central composition, the content isn’t very dramatic, but just a sweet house with angles of the light and spectacular use of color; greens with splotches of dramatic red flowers.

One last thing: here is a cool tutorial to turn an altoids tin into a tiny water color palette.