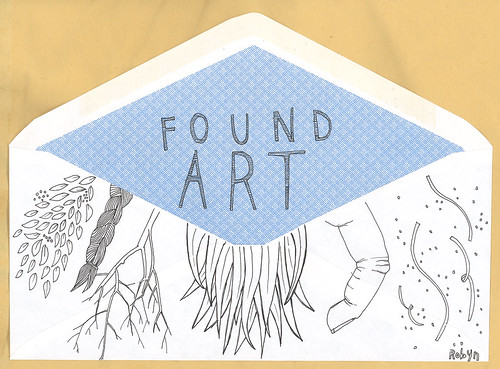 For my second Found Art Tuesday I decided to not worry so much and just put something… anything out there into the world. While doodling on an envelope I realized just how often I do this and how the piles of scrap papers build up quickly. I never know what to do with them and they usually just get tucked away into a sketch book until the sketchbook can no longer hold all the scrap papers. I decided that I would put this envelope out into the world, and since it was an envelope, it would be perfect to hold a few little somtin’ somtin’s. 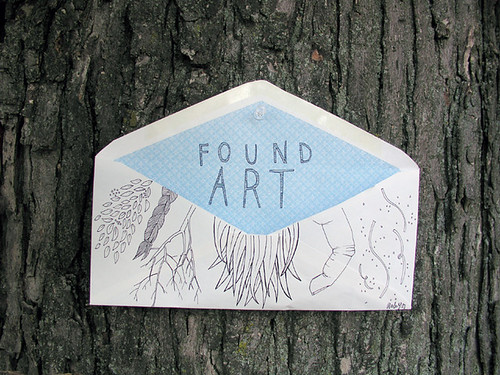 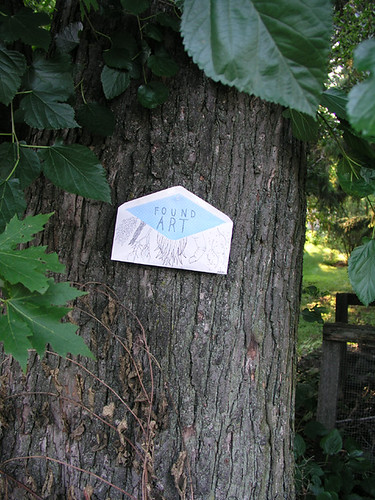 I love the idea of guerilla art and just putting stuff out there and the idea that anybody walking by can find it and how things like that just shake up the day and add interest to life. I have this real phobia though about people talking to me (face to face) about my art so I like the idea of scattering it far away so that they don’t track me down (as if anything I make was important enough that a person would track me down). I give props to Rosa for freeing so much artwork in her community that she has been featured in the news, something like that would probably make me hyperventilate :) 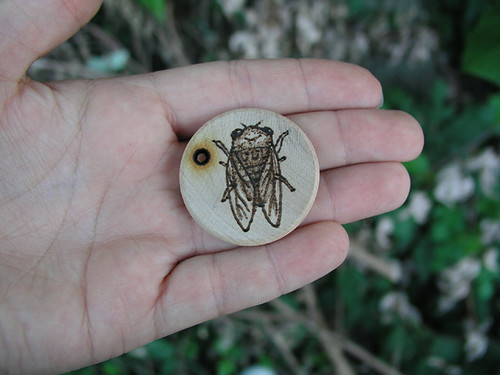 But for this piece, because it is not so important or I am not so attached to it, I decided it might be fun to just attach it to a street post in front of my house. When it came down to it though, I was too afraid, so I started walking down the alley. Sure enough, a guy is walking towards me, so I had to wait till her passed and then I was so afraid that people in the houses down my street were watching me. The street posts in the alley were too visible and so I started walking further away until I noticed some beautiful flowers at the edge of the alley against someone’s garage. I stopped to take a couple pictures of the flowers and while I did that I noticed a beautiful huge tree at the edge of the property. It was perfect to tack the envelope to. Inside I tucked a little note explaining that it was found art and that it should be taken, a tiny skein of handspun yarn, a 1″ button with a little sketch on it, and this wooden pendant with a locust on it. I notice people walking down our alley quite a bit so I hope someone takes it. I know this isn’t the theme, but I think I might continue to do Found Art pieces like this each Tuesday, as it was fun and I wasn’t stressing myself out about it having to be GREAT ART.

Oh, and Rosa tagged me for a meme, so you will probably see that tomorrow.