Last month I posted about the upcoming Strike Away Show. Did anyone else participate? I’d love to see links to your pieces.

It took me forever to come up with an idea for my piece. It took me so long that I debated participating at all. I don’t know why it always takes me so long to have my aha moments. Immediately afterward I will feel like a genius, but then shortly thereafter I realize “that was the most simple idea. Why did it take me so long to go from A to B?” My GENIUS idea was to make a #LittleArtBook from a matchbook cover. Similar to this  LittleArtBook, I worked almost entirely from my own gelatin print papers. 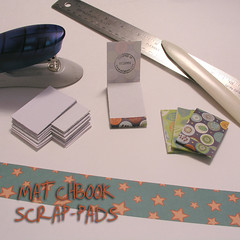 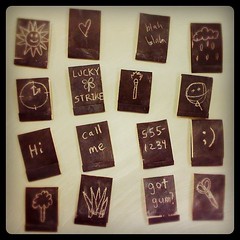 The matchbook was actually a perfect theme for me. When my SIL’s parents used to own a local bar/music venue when I was in college, we would sit at the bar and draw on all the matchbook covers. Then, I used to make little matchbook style notebooks to give away as freebies in my etsy orders (pictured above circa 2009 and 2011). And, as I mentioned on the last post, I apparently hoard vintage matchbook covers. 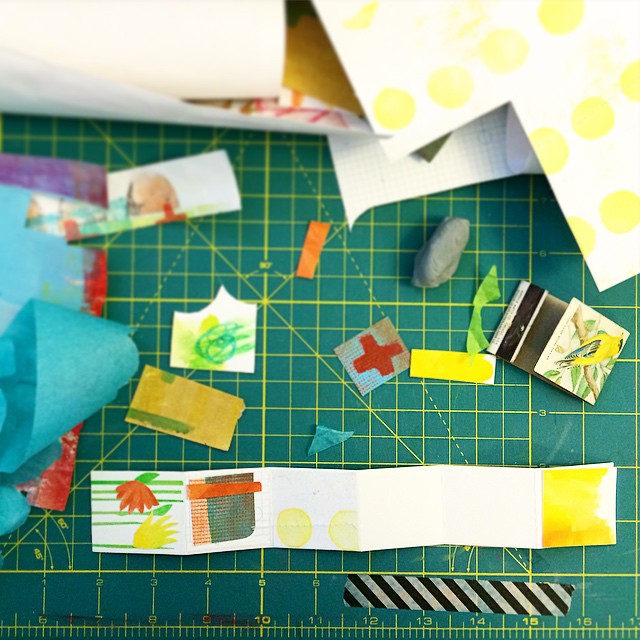 I decided to make an accordion fold book, so that the panels would open up for display purposes, but each page is its own composition. 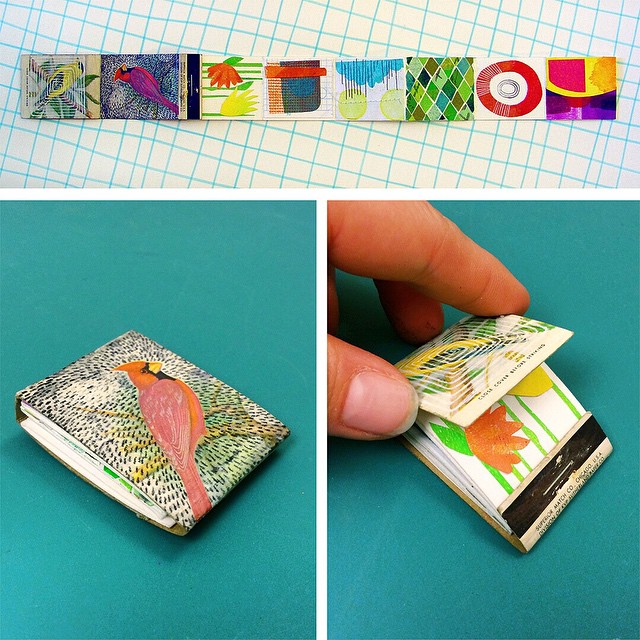 As shown in the previous post, I had a lot of vintage matchbook covers to choose from. While many of the books I had were from Ohio Blue Tip, the vintage matchbook I used as a cover was a brand called Superior Match Co., from Chicago, which was perfect because I’m from the Chicagoland area-ish. The book had the remains of the matches that had been pulled and used on the striker pad, so it had plenty of love and use. I was able to remove the staple and take out the old match stumps and staple in my own pages. The cover also had birds on the cover, and for a girl with a bird-like name, I felt it was appropriate. In addition, the cardinal has been a bird with a lot of meanings and symbols in my life. The cover images were so beautiful and I wanted to keep them intact, otherwise I might as well just build a whole matchbook from scratch, so I just did minimal mark making to alter the covers. 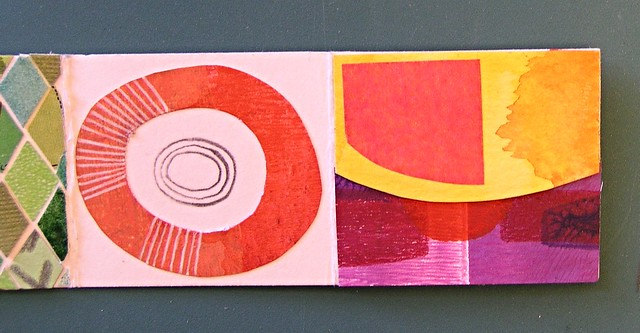 Some close ups of the panels. The finished piece was something like 1×2.25 inches. So TINY! It reminded me of back in the day on flickr when I’d see people doing “inchies” and thinking to myself “That looks like fun” but if I sat down and tried to make any it felt like a lost cause. Just way too small. BUT, in an accordion style book, it worked and it was so much fun I might do more!

Here is a little video I captured really quickly to show how it opens. I was going to have Matt help me film a better one, but then I got too impatient to send it off, and forgot to record a new one.

Speaking of mailing, this piece was a nightmare in the postal system. In almost 10 years of running an etsy shop, I have had the utmost faith in the USPS, never losing or damaging any of the hundreds of packages I have sent out. This package, however, has altered my view. The piece had to be in the hands of the curators on May 3rd, which is a Sunday, meaning it needed to arrive in the mail by Saturday May 2nd. I sent the package 2 day priority mail (using a postal machine) on Tuesday, April 28th (I think). That meant the package would arrive in plenty of time, even if it was delayed a day OR TWO, as sometimes happens and is understandable. On the Friday night before it should have arrived, I checked my tracking and it said it was still in the Chicagoland area! I’ve been noticing a nasty trend lately, that all mail going through Chicago is delayed by days, and there is no excuse. I was already pretty annoyed when I checked again right before bed, in hopes that the tracking would be updated and show it had really been in transit to CA all along. Well, it had updated, but not in the direction I had hoped. Somehow it had made its way to FLORIDA! Yes, FLORIDA. My package from Northern Illinois, headed to California, took a trip to Florida. I knew immediately that my piece wasn’t going to make the deadline cut off. I immediately emailed the curators with the tracking info and explained that I would be going to the post office the next morning to find out what happened. The next day I explained to the postal employee at the counter what has happened, in hopes that they would explain that it would still arrive on time and that they just ship things like that sometimes (who knows? I know it doesn’t make sense, but I was trying to give them the benefit of the doubt, ya know, because of above said utmost faith). As soon as I explained though, the clerk said “oh dear, they’ve made a mistake” and immediately rushed off to get a manager. My eyes got big. The manager took my receipt and came in to tell me in the most positive and happy voice “your package will arrive in 5-7 business days, Mam”. I said “But I paid for 2 day shipping” to which she responded that 2 day is not guaranteed and went on to explain that it even says that it is not guaranteed and is only suggested and that sometimes packages just travel that way (to CA via FL?). I could tell she was trying to defuse me and get me out of there ASAP, even though I had gone in there on their side, not angry at all. Her attempt at trying to make it seem like it was no big deal, and that everything in the world was happy-happy-joy-joy actually worked to make me FURIOUS! It was then that I asked to make a formal complaint and she responded with “you’ll have to do that online” and with tears in my eyes, knowing that my piece wouldn’t arrive in time for the cut off date, I stormed out. When I got to the car I started thinking more clearly and went back into the lobby and photographed each page of the mailing machine that I used and NO WHERE, and on NO PAGE does it say that 2 day is just estimated or suggested. Fortunately, before I got home I received an email from Courtney saying that they would make space in the show for me, and I was so grateful. The package got lost, and really, I understand that, but what really made me angry was this employee’s response. She lied to me and denied any wrong doing, when the previous employee had already told me that it was a mistake. I’ve always heard that taking responsibility and apologizing goes way further than trying to deny guilt, blame shift and redirect anger, and I experienced that first hand here. If she would have said “I’m so sorry, we are going to look into this” and then promptly threw away my tracking info as soon as I left the office I would have still left feeling like they cared. This woman was doing it all wrong and I really hope that it was just this employee’s own way of dealing, and not a reflection of how the USPS teaches their managers to respond to patrons. End rant. 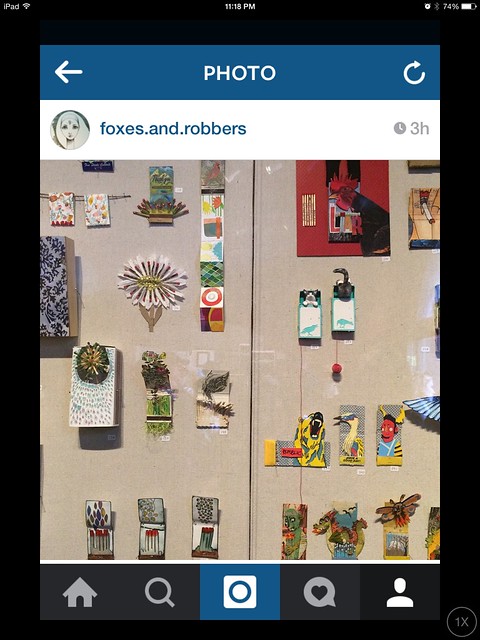 The show opened last Friday, May 22nd at Paxton Gate in San Fransisco, CA. It was so much fun to see all the images of the opening and I snagged this picture someone shared that included my piece. If you’d like to see more, use “strikeawayshow” hashtag on instagram. So many of the pieces are just amazing. And tiny! Tiny and Amazing! Just my type of artwork!

One thought on “Strike Away Show 2”