July 9th my father passed away suddenly and unexpectedly. He just turned 72 in June and my parents would have had their 46th anniversary next week. We have received such a wonderful outpouring of love, prayers and support this week as we said goodbye to him with the visitation and funeral. I’ve been so numb and drained but the fact that my whole family lives here, we’ve been able to hold each other up and it has kept us all sane and functioning.

A picture of my dad when he was a kid. I have just been through the worst 2 days of my life, starting yesterday with the type of phone call that I’d never wish upon anyone. My dad died unexpectedly. I’ve often worried about a phone call just like this, partially because my family has been too lucky, too charmed, too fortunate, no one hurt, no one sick, no one died, and that is unheard of. Who gets this far in life without something wrong happening? And here it is, and now life will never be the same.

The man and his hats, legendary. It’s been very therapeutic going through ages and ages of pictures. Here we are, my brother, dad and little me peeking from behind to get in the shot. He was a big guy and some people have been telling us about how he really scared or intimidated them until they got to know him and realized he was really just a gentle giant. A smart and sarcastic, but gentle giant. 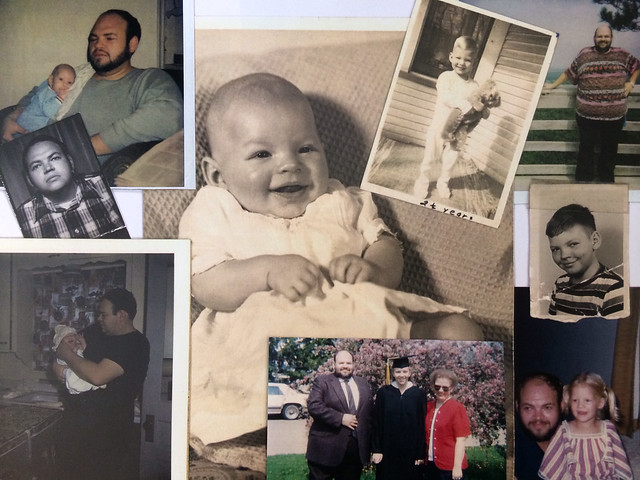 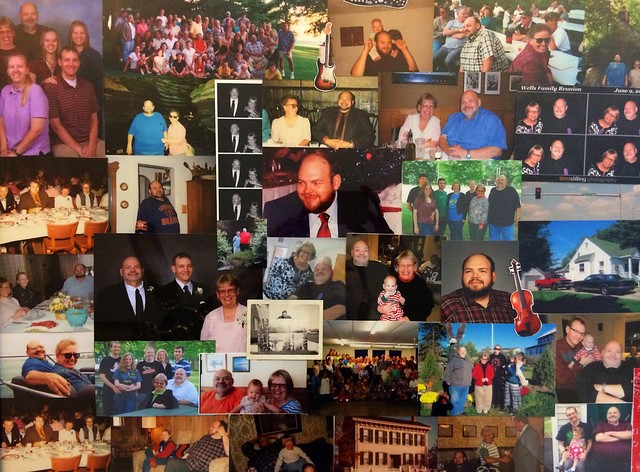 This is one of the framed photo collages we put together for the visitation. It was so therapeutic going through all of our family pictures, searching for pictures of him and recalling all of our memories.

Some memories or thoughts on my dad

My dad loved everything surf culture, Endless Summer and Dick Dale, we bought him a surf calendar every single year.

He took me twice to see the Rolling Stones in concert.

I have a memory from when I was really little of him laying on the hammock in my parents’ back yard and me asking him in my kid voice if we could go to “the libary” and him giving me a hard time because he didn’t know what a libary was. I expounded, “where they have books with words and pitchers” and he explained “It’s libRARY, and pitchers are for pouring”

I definitely got my multi-tasking from him. He was known to daily watch tv, with the radio on and read a magazine all at the same time.

I remember missing being held by him after my brother was born (at 4 years old. I was and am very much a middle child), and pretending to fall asleep on the couch just so that he would pick me up and carry me to bed.

He was a collector and hobbyist. Coins, knives, radios, guitars, violins, treadle sewing machines, ham radio, taking pictures of dilapidated barns set against the midwest plains, and on and on and on.

He was the hardest person to buy presents for because whatever he wanted he just bought for himself.

He said the movie Animal House was pretty much his exact experience from college and his fraternity years.

I remember visiting my dad’s office one time and seeing that he had posted a picture of me that was printed in the newspaper (when I worked for the paper) and realizing that my dad was proud of me after all.

He was extremely intelligent. I remember him saying how much he enjoyed talking to Mr. Dicky (Dickey?) because he was the only person he knew that was smarter than he himself was. #canyousayhumble?

Despite that intellect, we all found it very humorous then when he would get obsessed with certain tv shows like Clarissa Explains it All or Two and Half Men.

He always carried a handkerchief with him.

He was named after my grandma’s oldest brother, who was a millionaire and owned his own horse ranch.

He went by Dick, so you knew when someone called pretending to be his buddy but called him Rich, chances were it was a telemarketer.

He was an only child and we all remember our mom saying how he couldn’t understand why we (my siblings and I) would always argue and fight. He always figured if you had a sibling it would have been a built in best friend. But my mom, a child with a brother and sister as well, had to explain that’s just how siblings are.

My dad loved hats. We used to go to the Chicago Air and Water show every year. One time we went into the city and he bought two hat at a hat shop. One a regular hat, and one indestructible hat, the salesman demonstrated that you can pull and tug and wring it and nothing would phase the hat. He wore the regular hat out the door and got a box for the indestructible one. We walked out onto the streets of the “windy city” and the hat blew off his head and promptly got run over by a taxi. It ended up being ok, but it was just so funny that of course the indestructible hat was safe in the hat box still.

One thought on “I’ve lost my dad”