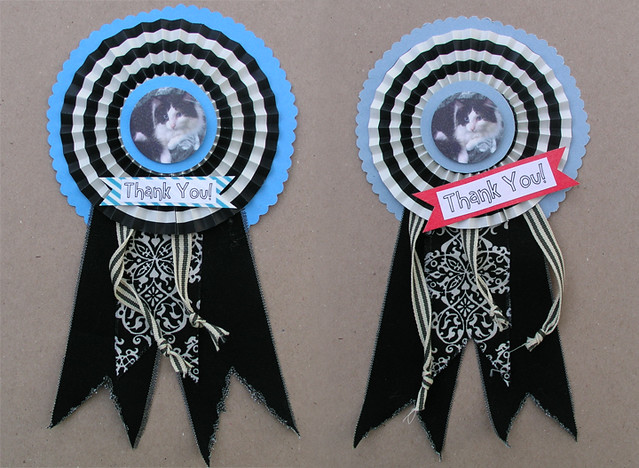 Our lost cat ad that we ran in the paper mentioned a reward. We read that it was a good idea to offer a reward when searching for your pet. Anything that can help motivate people is worth trying. The couple that helped us bring him home were vocal several times that they didn’t need a reward, but we are so grateful to them. Grateful, not just for reuniting us with him, but also for caring for him when he was just a stray. They had put out a blanket on their porch for him to sleep on and provided water and food for him at a time when it was 100 degrees outside. To us this means they kept him alive! We have a few things to offer them as a reward, but I wanted to MAKE something with my own hands to show how thankful we are. I put together these paper award ribbons with Bishop’s picture and will be giving them one.
After my mom and my sister made these wreaths for the Fourth of July, I had the idea to make an award ribbon the same way, and found this tutorial as a basis. It has black and white stripes, which is his coloring and blue as an accent because he has blue eyes and it was one of the major characteristics that helped bring him home. I also used black and white fabrics as the bottom part of the ribbon.

One thought on “Reward ribbons”