It’s been a rough week

Monday night, in attempt to get some cool air in our bedroom, I opened a window with a screen. Our cat Bishop loves to be in the window sills and he saw that I opened the window immediately. I remember playing with him on the bed for a minute, while he tried his best to scramble away to the window. I went into the bathroom to take out my contacts and assumed he was just in the window sill hidden behind the blinds and curtain when I got back. 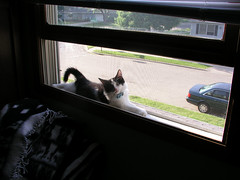 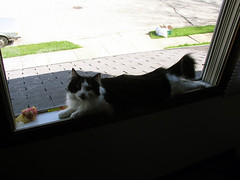 It’s not unusual for him to spend an entire night in the window, looking out. What was unusual was the next morning when I woke up and he didn’t immediately come to me. See, the mornings are our time when Bishop comes up to me purring like a loud motor and just can’t get enough affection and attention. I wasn’t too startled and called for him a few times. With the windows open over night it had gotten cold in the house, so I went around and closed all of the windows and continued calling for him. Surely he was in one of his warm hiding spots, like Matt’s undershirt hamper in the back of the closet. Nope, not there. I continued calling for him before Matt finally woke up asking “he still hasn’t come?” He got out of bed and we both hunted the house calling and looking for Bishop. Matt started to worry that he had gotten out, but I said “no, he’s here somewhere”. When we still couldn’t find him after a while it all of a sudden hit me, the new window I had opened in our bedroom. I lifted the glass and touched the screen and the entire frame swung out freely. I shouted “NO! HE GOT OUT!” and we both rushed to the yard calling his name. Unfortunately, he had probably slipped out the night before around 10:30 p.m. There was no sign of him in the yard and my immediate fears went to him laying in the street from being hit by a car. I’ve often said that if he were out on his own, he wouldn’t last a few hours. I find temporary relief when I don’t see him in the streets. I figure he is hiding somewhere, but this relief is only temporary when I start envisioning him being hit and then running into a bush to die, or being accidentally locked in someone’s garage.

We always joke that he is such a little spoiled prince. He’s beautiful, but can be vicious. He plays fetch, carries his favorite toys around the house in his mouth, and taps us on the shoulder when it’s time be fed, BUT, he bites Matt’s ankles has to be gassed at the Dr.s office because otherwise he makes the Vet bleed.  Think, a cross between Colin from The Secret Garden and Joffrey from Game of Thrones, a horrible brat, but at the same time shiny and pretty. He always wants to go outside, but to him outside means rolling around in the lush lawn while chewing on sweet grass, always within our constant reach and safety. In reality, outside can mean death by other animals, cars, dehydration or starvation to a cat.

The first day I thought he’d be home at noon for sure, because that is when he is fed. He is a cat who doesn’t like to miss his meals. Matt stayed home from work and kept vigil but he never came home. This got me really worried but I hoped that he would wander home that evening. We read all sorts of tips about how to get your cat to return home and have followed everything. When he didn’t return that night reality started sinking in.  The next day we put up signs, passed out information, and Matt’s mom stayed at our house while we went to work. On the first day we had one phone call response but when we went to check it out, it wasn’t Bishop. Tonight he will have been gone for 3 days. This morning when I woke up I definitely felt reality sinking in that we may likely never see him again. It’s so heartbreaking because he really is part of our family. I told Matt “even if we can’t capture him, I just wish that someone would call and say they saw him” this way we’d know he is still alive. This afternoon we got our answer.

First let me shout out big thanks to The Daily Chronicle, who allows people to post FREE lost pet ads WITH a picture. While Matt was at work he got a phone call from a woman that saw the ad in the paper and believes she saw Bishop the night before at her house, hiding under their car. We believe that it was Bishop because she described him as wearing a collar with a bell (which I accidentally omitted from the ad), AND that he was very frightened and kept hissing at her. Before Bishop I always thought cats only resorted to hissing as a last resort, but Bishop hisses at everything and everyone. Bring him inside when he hasn’t had his fill of grass yet, hiss. Barely graze his tail when passing by, hiss. A person casually gazes in his general direction, hiss.

The caller lived in a location near our old duplex and it looks like he might have been headed that way. We are thrilled. Matt immediately left work to go to the area to look for him, pass out more signs and talk to people. I was on cloud 9 the rest of the work day and had to keep reminding myself that we don’t have in our arms just yet. At least we know that he is out there.

It has really meant so much to me, the kindness of friends and family, as well as complete strangers. People who have offered to watch over our house while we are away, people who have hit the pavement looking for him, people who have helped spread the word,  and those who have prayed and sent good kitty-come-home vibes. If you can send any additional prayers or kitty-come-home-vibes I will be grateful. I hope to report back soon that he is home, safe in our arms again.

6 thoughts on “It’s been a rough week”