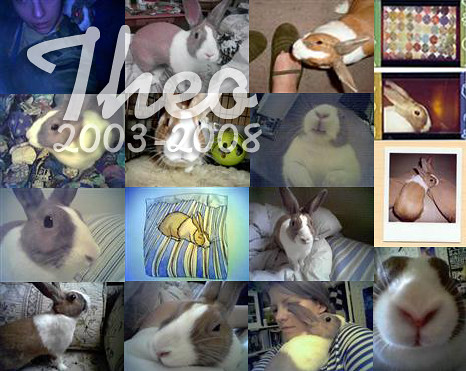 Yesterday matt was wearing an undershirt and I noticed that it had two little tiny holes on the front. Those were very identifiable bunny bite-marks, they looked like vampire bites. She had this magical ability to nibble holes in things without you ever seeing it. In fact, I would say a large percentage of matt’s undershirts have similar holes. Her lasting legacy. I’d put on my favorite new top and get to work to realize I have two holes in the sleeve. She chewed through wires like nobodies business. She destroyed two wii sensors in a heartbeat, not to mention my cell phone charger, my nordic track sensor, my alarm clock and the list goes on.

I’m realizing that in this weird way I really identified myself as a rabbit owner. Most of my online profiles mention being a pet rabbit owner. She plays an important part in my etsy banner. I’m member to many rabbit communities online and on flickr. I was thinking yesterday how there are 2 types of people in this world. Those who have or have had rabbits, I’ll also include in this group those who wish they could have a pet rabbit and might someday, and then the other group; those who just don’t understand. The latter being the people who still think rabbits belong in hutches outside, don’t realize they can be litter trained and think that 5 years for a rabbit to live was a long go.

Tuesday night I went to collect and review pictures and video of Theo that I’ve taken or scanned over the years. All my pictures since I first started taking digital pictures were on my external LaCie drive. Bad, bad, no-no, from a person who knows way better than that. Of course, the drive was dead. Not only does it have all my pictures, all my scans and pictures of my artwork, my website files, my important documents, etc., it also has my entire itunes library of 8, 386 songs. Didn’t I learn my lesson when something like this just happened to Rosa, no, apparently not. Didn’t I learn my lesson when this same thing happened, not once but, TWICE at work? No, of course not.

I found all the pictures of theo from my old textamerica blog still on my computer. They are all microscopic in file size so I put them together for this little tribute, until I can put something better together. Tuesday Matt suggested we buy something, or do something in her memory or to her tribute. Possibly a statue or a donation, I’ll have to think about it.