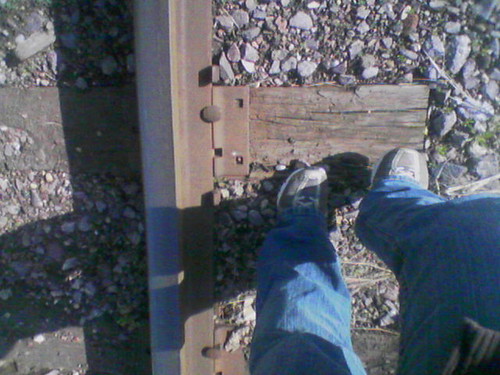 on the tracks, originally uploaded by robayre.

I really enjoy walking to work. I’m so glad that our new house is still within walking distance and actually only about an additional 5 minutes further. Last year I started a flickr set devoted to pictures I take while walking to or from work. It’s pretty sparse now, but hopefully it will continue to grow.
Today while walking I had something odd happen.
I was walking alongside a rental house, approaching an intersection when I noticed all of a sudden this fluff rolling down the street. As I came to the front of the house and reached the intersection I saw a person jump into a truck and pull away. Where the truck pulled away was left a large cherry blossom limb, covered in blossoms (which turned out to be what I thought was fluff). The limb was resting in the grass between the street and the sidewalk immediately in front of a house. There were no flowering trees anywhere near so I can only assume that the person stopped their vehicle dropped the limb there and then drove off.
What I like to think happened: A woman lived in the house and she told her boyfriend how much she loved the blossoming trees in the spring. He cut a limb from his yard and left it at her front door for her to be surprised once she woke up in the morning.
This is just a small sample of what kind of thing happens when walking to work.