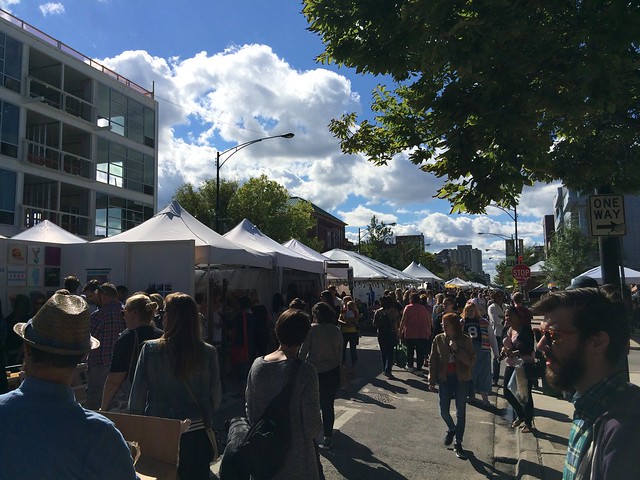 Last weekend was Renegade Chicago and as usual my sister and I went together. I think this was our 11th trip and this year I limited myself to $100. This meant I was already out of money halfway through the show, wah. You can imagine my anguish, sadness and regret when I found a $10 bill left hidden in my wallet later. I would have spent that in a heartbeat. Fortunately, my birthday was just a couple days later, so a couple things were bought as presents via my sister. Previous Renegade Craft Fair posts 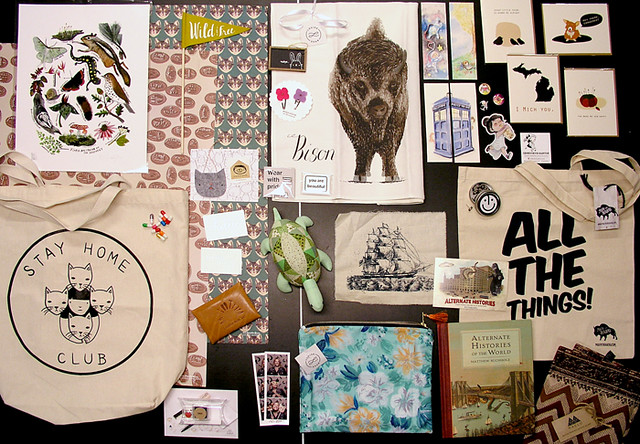 I put my sister’s and my loot together for one picture and I really should have photographed them separately. We covered the ping pong table, and standing up on a chair, the ceiling wasn’t high enough to really get a picture and then I lost detail, being so far away. Lesson learned. I’ll start top left corner and move clockwise and spiral in. –Flora and Fauna of the Midwest print by artist Diane Sudyka, I loved all of her work

-Wrapping paper from La Familia Green. One paper is a pressed penny pattern and I collect pressed pennies, and the other is a cat pattern. They also had a food truck pattern that I was tempted by, but their deal was for 2 wrapping papers, so I just got the two. Backstory on this paper was that I bought it and they wrapped it up all nicely, handed it to me in a paper bag with handles, and apparently the tall rolls must have fallen out of my bag almost immediately. I went back to the booth hoping maybe someone had returned it to them, but they hadn’t, and the, they gave me 2 new ones, which was so kind that it made me tear up. I feel indebted to them for their generosity.

–Migration Goods cat ornament (with tongue sticking out. My sister bought a little Nope bunny plaque and some barrettes for our niece. It was very nice to meet Eling after having followed her online for years, probably first through flickr back in the day.

-Bison dishtowel by Louise Dean, which reminds me, I need to post about our recent trip to Nachusa grasslands and the Bison we saw there

–Genevieve Santos bookmarks, sticker and buttons. I was excited by everything in this booth, especially after I discovered that I was familiar with her work. I recognized a card she was selling as one I had purchased on Paperwoven, when I was researching the site and if I’d like to try and sell my own cards there. Everything she does is beautiful and super cute! How could I not buy that sticker above with the girl drinking bubble tea?

-My sister bought a bunch of greeting cards from TheBoxBerry

-We both chipped in to buy these brilliant Pon pushpin paper clips, that I remembered from their kickstarter. They allow you to hang prints and things in boards and walls without damaging the artwork. -My sister bought this infinity scarf from Maelu

-My sister bought the watercolor patterned zipper pouch from Louise Dean, the same artist who made the bison towel above.

-I got my annual photobooth picture taken from magbooth. So glad my sister saw it because last year I missed it.

-I bought a stamp ring from Matters of Delight. I’ve been wanting a ring with a stamp on it for a long time. You see little kids toy stamp rings all the time, but I was wanting something a little more adult. But just a little bit, ya know ;) it says yay! and I love it!

-Another birthday gift was the Stay Home Club bag which I’ve been wanting for years and years. I think I first found out about them via Katie at Skunkboy and love everything they put out. Side note: because I am constantly fighting contradictions within myself, I said I need to buy the Oh Darling Let’s Be Adventurers Bag and sew them together into one bag.

-At Oh Hello Friend, I bought a bunch of little pill capsules with smiley faces and rolled up notepaper inside. I thought they would be perfect for putting in geocaches and sending to friends. I also bought a few gold letterpressed business cards with friendly greetings.

-I purchased some You Are Beautiful stickers AND an enamel pin that looks like their stickers.

-I made a free leather pouch at the Leather Arts, Inc. booth

It was such a good day, beautiful weather, the people were all nice, I got such great treasures and found out about so many new, great makers. I could have easily spent twice as much! We were saying how some years the vendors will be a lot of repeats of very similar products, but this year there was a really great variety and lots of new booths that haven’t been there before.