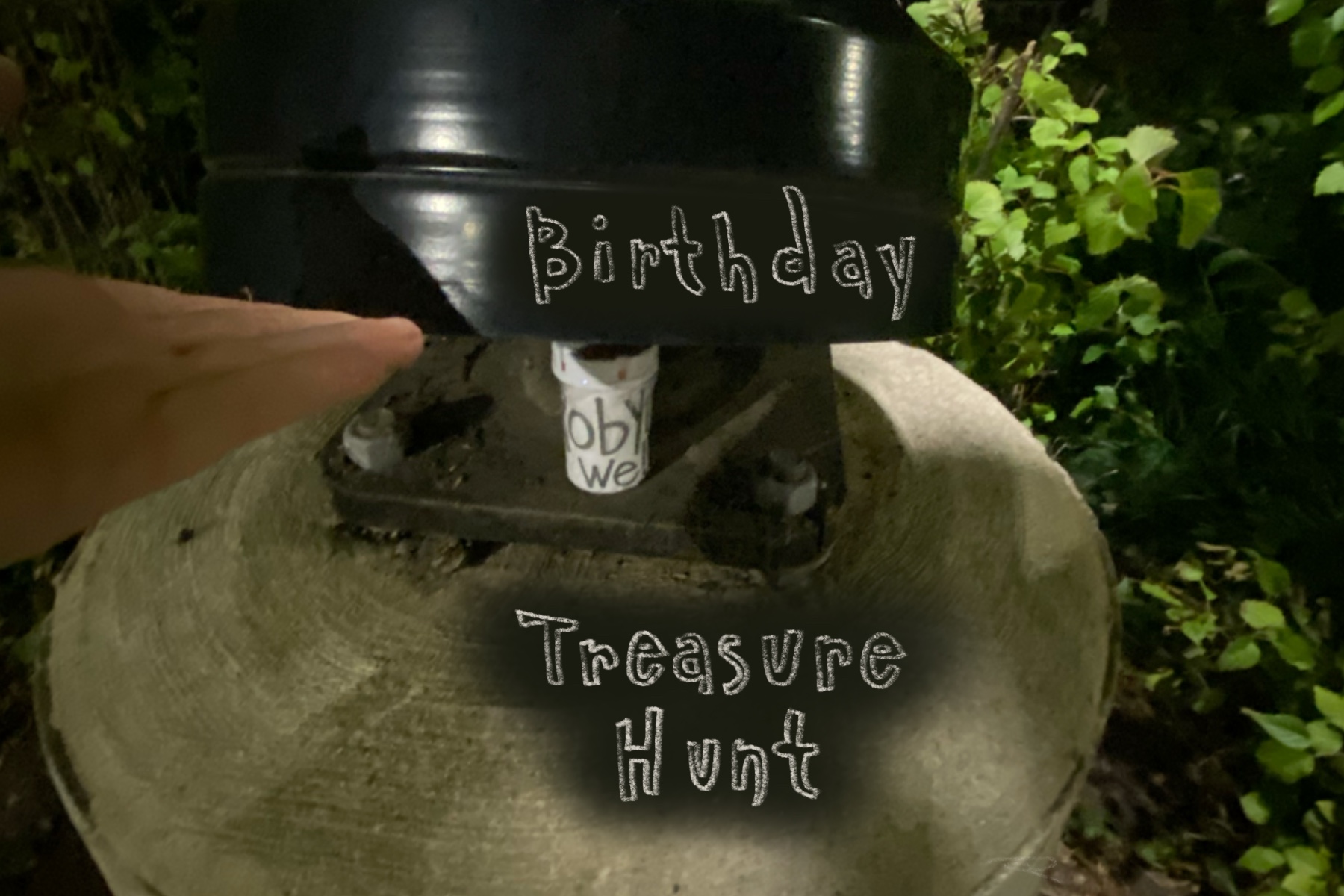 Buckle up, ready to go on a ride?

My birthday is September 22nd. Not that it matters to this story, but sometimes that date falls on the first day of Autumn (yay), and sometimes it falls on the last day of Summer (boo). This year it was the first day of Autumn, which fell on a Wednesday. I’m totally a fall person, can you tell? The week of my birthday was pretty hectic with several evening meetings (one about business taxes that was stressing me out) and family get-togethers. Early in the week my friend Courtney messaged that she had something for my birthday and asked if I could let her know when we could meet up, or maybe if she could just swing by to drop something off. I told her ok, thinking I probably wouldn’t be able to meet up until Friday. After I got home Wednesday night, I got a text from her that she dropped off something in my mailbox.

It was a lovely little package wrapped in some very Robayre fabric. Courtney knows me VERY WELL. Inside there were gummy candies (my favorite), a magnet, a sticker and a Studio Ghibli postcard with the sweetest birthday wishes on the back, all wrapped up beautifully with some queen anne’s lace (a favorite flower of both of ours) tucked in on top. There might have been more things, but I forgot to take a picture and things got scattered immediately, as I started eating the gummies, etc. The birthday note said to hold onto the card because I would need it for a package that would be arriving in the mail shortly. The next day (Thursday) the package arrived in the mail, but I had multiple meetings in the evening and decided to hold onto the package and open it once I had time to fully devote to it. I’m glad I did that. 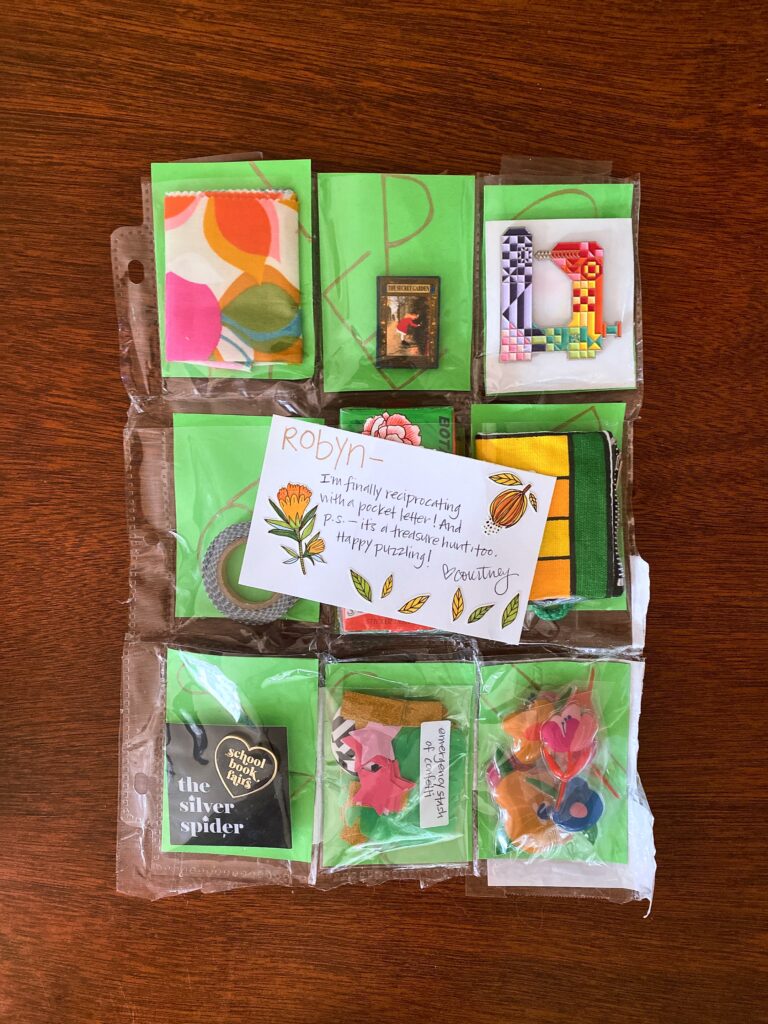 The next morning I went about my usual Friday morning routine, then I remembered the package, whoooo hooo! It wasn’t until I went to open it that I realized it was actually a pocket letter! I love making and sending pocket letters, but this is only the second one I’ve ever received. And boy, was it a doozy. 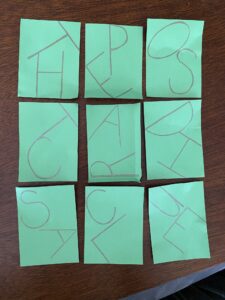 Each pocket also had a card. One side was green and had the message “THE POSTCARD IS A CLUE”. The flipside was black with gold lettering in a secret code. I went and got the postcard and noticed dashes and dots going up and down, along the sides of the card. 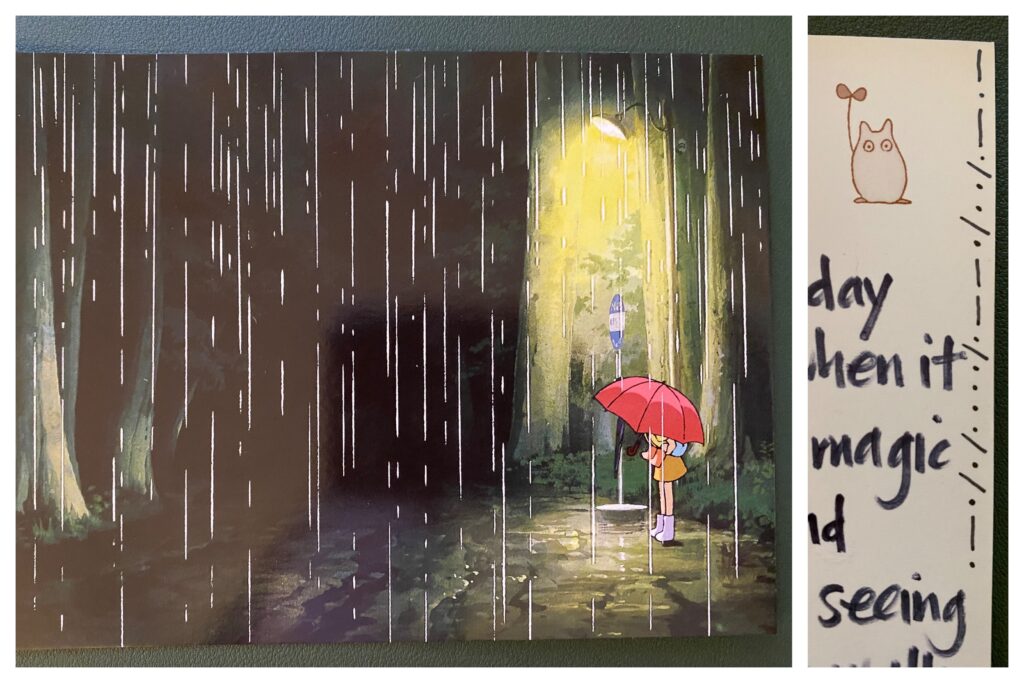 When I was little my dad was involved in the local ham radio club and actually knew Morse code, so I recognized it and immediately went to a website to translate it. I’d get a letter or two and then an error, on both sides. I had a moment of panic thinking I was going to have to reach out to Courtney and say I’m too stupid to do this, before I realized I was trying to translate them upside down. I turned the card the other direction and was able to decode. 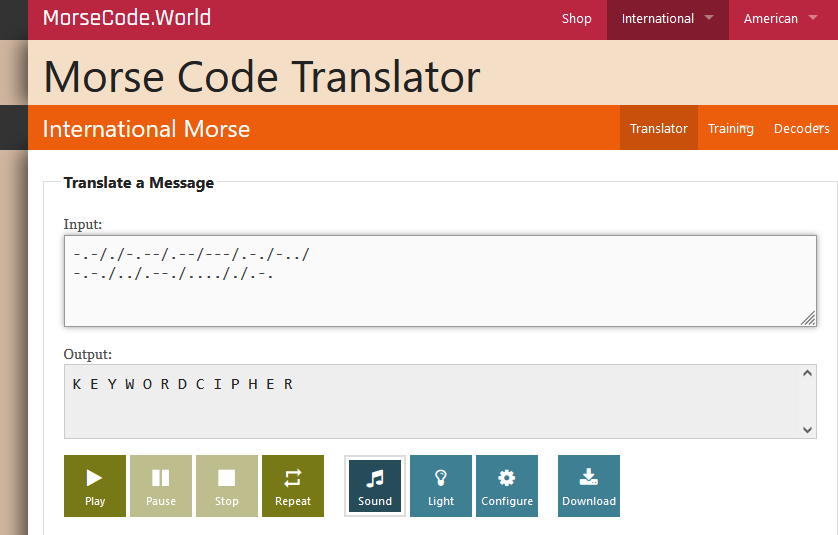 It translated to “Keyword Cipher”. The next part was rough, and I was really scratching my head as to how the postcard was a cipher. You can see the picture on the reverse is raindrops and I wondered if those dashes and dots were also supposed to be translated. I decided to move back to the whole coded message and after trying to just jump in (3 letter words were likely the, you, or and, etc.) I realized one word in the last panel was the longest word and then it clicked. It said Happy Birthday Robyn, like the headline on the back of the postcard. Once I knew all the letters in that panel I could easily move forward.

From there it went pretty quickly. I actually took a picture of it on my iPad and then translated it, so I could remove the layer of the picture later. I felt victorious for all of a minute before reading the message.

“Whenever I visit the parking lot of this building I think of Penelope and Odyssseus’ bed, because of the unique back porch visible nearby. If you stand facing it, the leftmost lamppost will be the place to look. Lift up. Happy Birthday Robyn.”

Right away I remembered a picture Courtney had shared to her instagram stories in the last few days. She had put one of my stickers on a lamppost, so I had a good clue that the lamppost in question looked like the one in the picture. I love geocaching and the lamppost trick is one I’ve experienced several times. (side note: one time I was doing one in a parking lot across from a business and after I was done a woman from the business ran out and asked me what I was doing. In her office they often saw people going to this light-post and lifting it up and doing all sorts of stuff and they were hoping it was not a drug drop off, ha! what a muggle).

Too many sleeps since then, so I had to resort to google. Apparently, even though Penelope stayed faithful to Odysseus, when one returns from an epic adventure as his, and as much time has passed, she wasn’t 100% positive it was him, so she tested him by saying she’d rearrange their marriage bed/room. Only Odysseus would know this was not possible because he had built their bed himself in and from a living olive tree.

Next, Courtney has been an a stellar example during the pandemic, so I know she doesn’t go out many places. I ran a list in my head of where she may have gone (her family’s churches, the grocery store, NIU where her husband works). I tried the parking lot to both churches, but there were no lampposts like she mentioned, let alone a tree/porch. The first time I ever did one of the lamppost geocaches, it was in the parking lot of the grocery store by her house. The lampposts didn’t look like her picture and there were no porches visible from the parking lot. I tried a few parking lots on campus, but the lampposts didn’t lift and didn’t match her picture. As it was getting dark, I went home and thought I might employ my sister’s assistance the next day, as she would also LOVE a challenge like this.

Before I had a chance to talk to my sister, Matt called from the road. Hoping that if I tell him the details he might have some ideas. As I went through it all, and tried to rack my brain for other locations Courtney would actually visit during the pandemic, and it hit me, THE LIBRARY! I was skeptical at first because the houses I remembered were leveled from a parking lot when the library was expanded. I looked on google street view to see if there were any porches visible, but the parking lots I was thinking of kind of go straight to the downtown businesses. Matt was almost home, so I asked him if he’d like to drive over and check it out and he said of course. 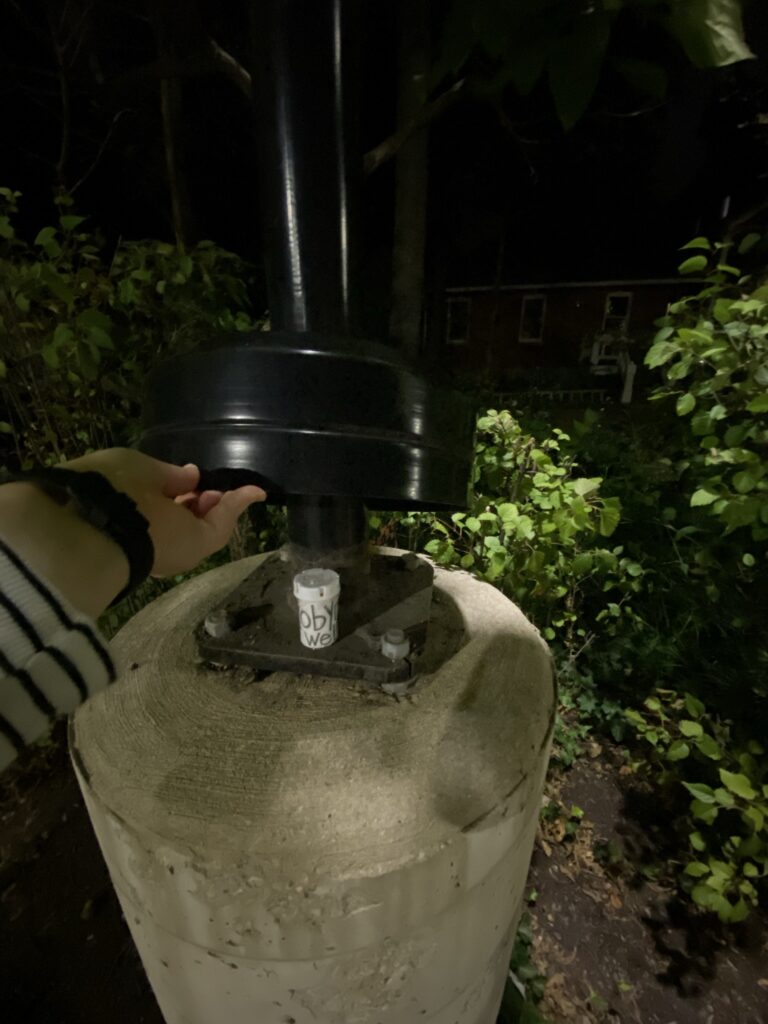 Once we got there I realized I had forgotten about the parking lot that wraps around the building. As soon as we got there I saw the matching lampposts from her picture. Matt parked thinking it was going to be a different lamppost, but I knew exactly which one it would be and beelined right to it.

I returned later during the daylight to get a picture of the porch she was talking about. Just that week there had been a post on a local facebook group saying that the house was for sale and suggesting that the library buy it. You can see the porch has been built around a huge, magnificent tree, visible from the library’s parking lot. 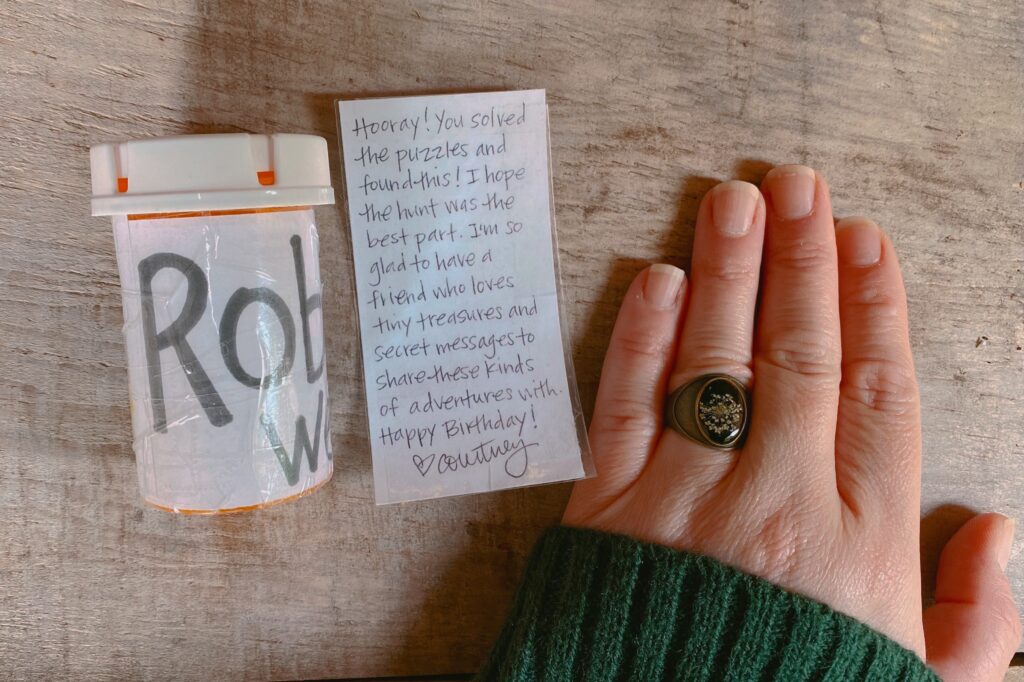 Inside the pill bottle was a note and this ring, which has the teensie-tiniest queen anne’s lace flower encased in it.

WHAT AN ADVENTURE! AMMIRIGHT?!?!

I immediately sent Courtney a message that I found the ring. She told me that she was making the next one harder, and I am a treasure hunt master, ha! She said she was inspired by a podcast (Criminal pod, episode called Masquerade)  I had listened to and shared about a children’s book and a years’ long treasure hunt that went with it. I highly recommend listening to it. 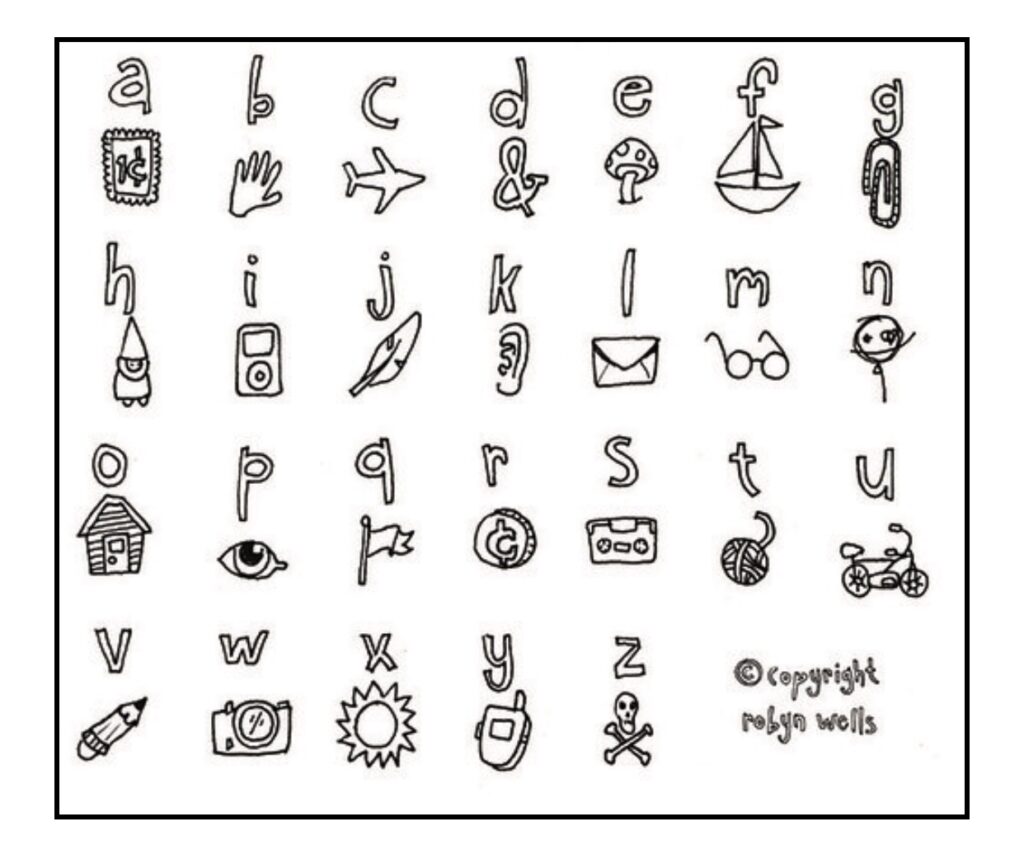 I remembered Courtney telling me about how one of her favorite holiday things is that her brother sends out a Christmas card every year with a puzzle on it. And then this week I remembered how I had created a whole font (Matt called it Robyndings) with a secret coded message, and inserted it along with my paintings in one of my Art-o-mat series. Customers would then need to visit my blog to get the cipher and decode it. I guess we are a friend pair, meant to be!

This birthday adventure has to be up there in the top 5 best birthday gifts. Not only were the puzzles and hunt fun, but it was so inspiring, and makes me want to make my own treasure hunts as well. But how on earth do I even top this?