Earlier this year artist Sarah Hand published her book Papier-Mache and I JUST HAD TO BUY IT!

When I was a kid we always made paper maché for pinatas for our birthdays, and assorted crafts, but it’s been a long time since I’ve done it. I followed the “Biggest Fan” project from the book to make a tiny cheerleader of myself. I even made a flying geese patterned apron, like I want to make for myself in real life.

As I said, it had been a while since I’ve done paper maché. I don’t think of myself as a person who is adverse to a mess, but wow, paper mache is VERY MESSY. I think the fact that the cheerleader is so small also contributed to that, because the paper needed to be torn so small and then getting lost in the paste. 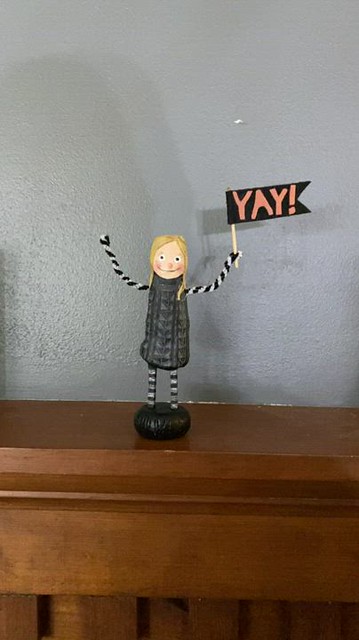 I also used Sculpy for the base, rather than a wood block. I had to do the face over and over and over again, because I wanted to do it in “my own style” but every time I did it came out so scary doll looking, so I just did it in a similar style to Sarah’s.

I just realized I should make a mini one of Matt and then we can have a pair.

There are a few other projects that I want to try as well… a crown (you know I love a paper crown!) and beads.

2 thoughts on “Paper Mache Cheerleader Me!”