At the end of October Matt and I took a mini road trip to Kentucky (I’ll post about that later) and I packed a backpack full of essentials to have with me in the car. Whenever I go away I always have to take art supplies because 1. I live under the delusion that I’ll have so much down time where I’m just free to make artwork or rather, the idea that maybe if I had down time and wanted to create art and didn’t have supplies I might die. and 2. I LOVE-LOVE-LOVE creating art in hotel rooms. I guess it’s the new environment. 3. I have such great memories of when I actually was able to make artwork on the road, here and here are a few. Unfortunately, I don’t think I even cracked my sketchbook open on this trip.

When we got back from our trip to KY I naturally had to unpack and after pouring out the contents of my backpack I realized it would make for a nice “things organized neatly” or “Whats In My Bag” shot so I arranged it all and took a picture (at the bottom of the post).

That picture, even though it isn’t what is in my every day bag, it got me thinking. I did my first #WhatsInMyBag post probably over TEN YEARS AGO! That actually predates hashtagging, I’m pretty sure, so it would have just been a “What’s In My Bag” post. I posted it to my then-(mo)blog robayre.textamerica.com. Ha, moblog, as in mobile phone web log. Sadly that post and image are gone, as I lost all the images that I had published there when textamerica sold their site and deleted my blog when I refused to start paying for it (no, I’m not bitter, noooooo). Hold the phone, I just remembered I had poorly backed up that blog’s images and found the only remaining traces, a thumbnail image below.

Ta Da! Picture circa 2003, I’m pretty sure. It’s so tiny you can’t make any of it out unless you are me and remember that I carried a tiny army green purse with billions of pockets and buttons on it. I can barely make out my black and white striped sunglasses, my rapidoliner pen and a bonnie bell tinted lip gloss, Express Yo Self, and I’m sure there must be some sort of small sketchbook, perhaps a moleskine. The rest? I have no clue.

Moving on, Here was my next “Whats In My Bag” post from 2006. Turns out, this image also pre-dates thisblog by a few months. 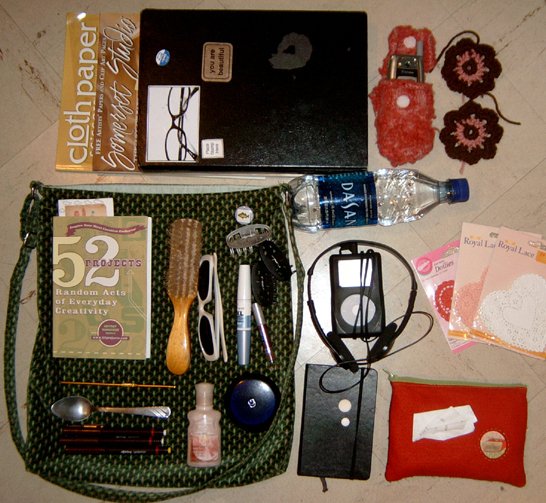 Things of note: yeah, I’m pretty much the same person I was in 2006. Still using white sunglasses (which actually were a carry over after not being able to find replacements for the black and white striped ones I always wore previously, see above), carrying rapidoliners, big sketchbook, little jotters, drinking only water, tinted chapstick (only now it’s Burt’s Bees), and an ipod, er, now it is an iphone,. 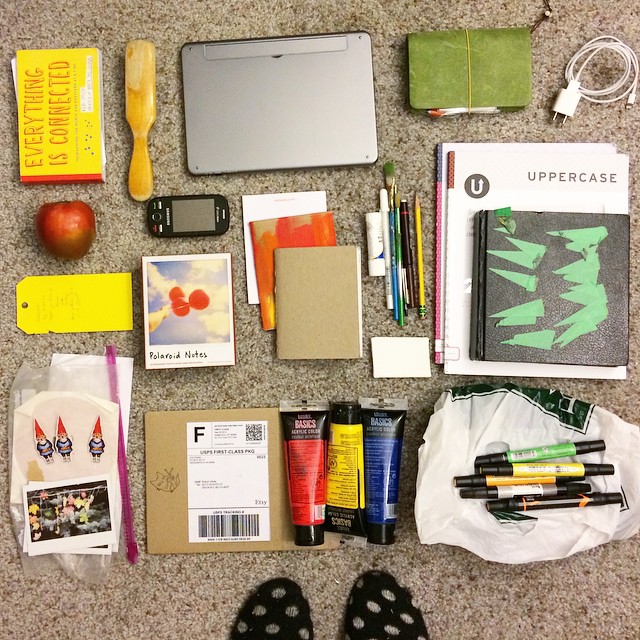 Everything is Connected by Keri Smith, a postcard book that I’ve been blindly selecting cards from and sending to people and every time the card is a perfect fit for that person,
Same hairbrush as 2006 picture, my ipad,
My Raydori (wow, just realized I never shared a post here about getting my handmade midori)
Charger for ipad/iphone, apple,
Old phone that still has numbers I need to look up occasionally,
2 jotters I made (one I’m working on, and one that was to become a travel journal, but I never opened) and a notepad from a hotel room we stayed in,
Gluestick, white gel pen, paintbrushes, rapidoliner, and a pencil
The last two Uppercase Magazines because you can’t rush those things and have to savor every little article bit by bit, and my sketchbook,
Ziplock baggie of graffiti stickers (gnomes) and 2 fuji instax pictures
An envelope from order from Amy Earles (Wool and Water) of an original drawing
The basics, red yellow blue paint, and the white rectangle above it is a tiny canvas I made,
Bag filled with all my Prismacolor markers

Not pictured, the backpack, which is also green, like the previous 2 whatsinmybag posts.

I would also be remiss not to share an inspiration for these posts over the years – The song Going Through Your Purse by the great, and sadly missed Chicago band Material Issue.