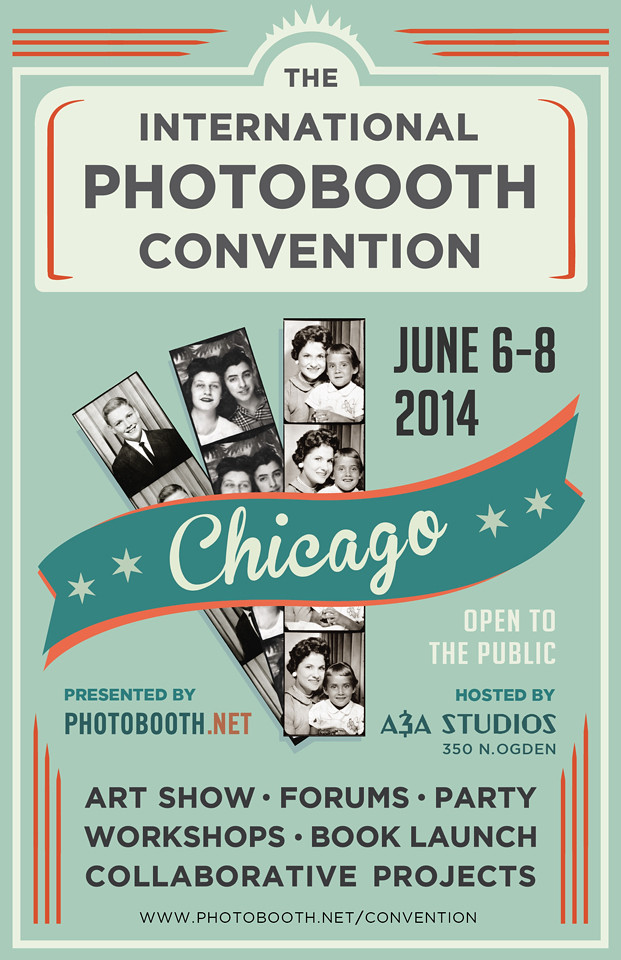 This past weekend I ventured into the city (Chicago) to attend the International Photobooth Convention. Years back it was held in Chicago and I chickened out going and then when the next convention was held elsewhere I really regretted missing that opportunity. I follow photobooth.net‘s blog and facebook page, so when I saw that it was being held in Chicago again I promised myself I would attend this year. I even stated on the facebook event page that I was attending. I couldn’t back out after that now could I? 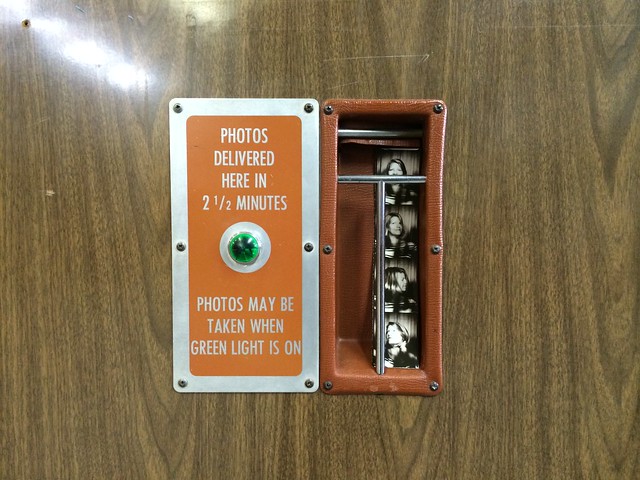 Even though I RSVPed about 6 months ago I still was really nervous about attending. I was pretty much in denial that it was approaching up until a couple days beforehand. I didn’t want to drag along someone that wasn’t as into photobooths as I was, but I was still afraid of showing up alone. I had these visions of showing up by myself and the record screeching to a halt as I walked into the door and everyone turning and staring at me. When I think of photobooths I think of getting pictures taken with more than one person, so to show up solo might be a no-no. But, I learned my lesson before and I was determined to be there, push through the fear. I almost had a mini panic attack when I realized the workshop I wanted to attend was limited to only 25 people, so 2 days before the convention I signed up for the workshop on photobooth art with Meags Fitzgerald. I half expecting to get an email that the class was already at capacity, and then I would cry, and probably use it as an excuse to not go at all. But, no message came and the day of the class I woke up early and headed into the city. 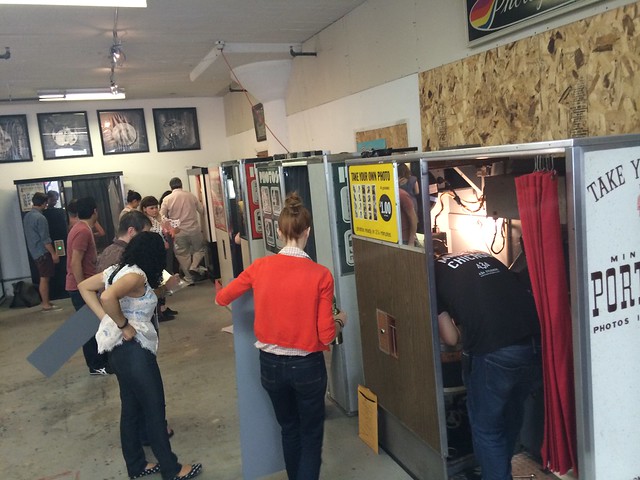 The main room that had 6 of the 8 photobooths at the convention. Meags is pictured above in the red cardigan and notice the machine next to her is open and being worked on.

While the record didn’t screech to a halt when I entered, I do think that most people showed up with friends, and/or knew each other from the photobooth.net community and/or at the opening party the night before. In regard to my artwork and photography I can be very “camera shy” (badam bum) and it is very hard for me to think creatively and be productive when I am feeling self conscious and I can feel self conscious when I am around other people. So, in some ways it was good that I was flying solo because I didn’t have to worry what someone else was thinking, I could get into a booth, close the curtain and be in my own world. 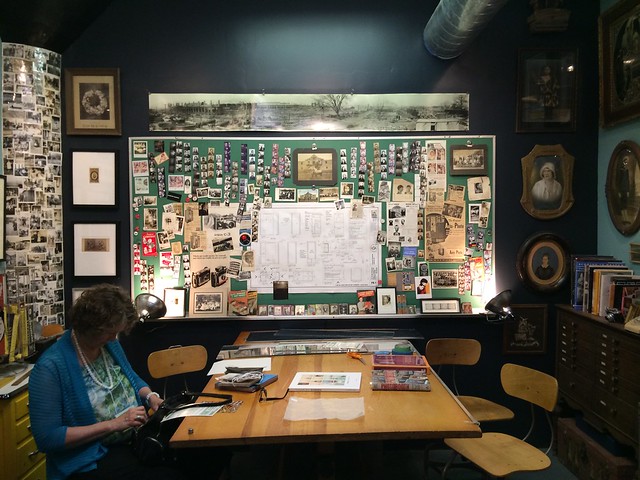 The workshop with Meags was great and opened my eyes to many possibilities. I really didn’t know what to expect beforehand and have to admit I had never thought too much about photobooth pictures in relation to Art with a capital A, other than self portraits and capturing a moment in time with a fun and unique automated machine. The class got my mind suddenly racing with ideas, but because all of these ideas and possibilities were plopped in my lap moments before we were to start working I didn’t have much time to really organize my thoughts. Immediately after the lesson I sat down at the desk pictured above. I opened my sketchbook and wanted to start brainstorming, but I was surrounded by people and my mind was going a mile a minute I was worried that by the time I had a plan of attack, time would be gone, so instead I just decided to go for it and start jumping in booths. I also had this pressure once I realized that I have access to all these booths right here and now, but  if I come up with some great ideas later on, I will have to travel to get to a booth and each strip will put me back $3-$5. Why can’t there be a photobooth convention every year in Chicago? 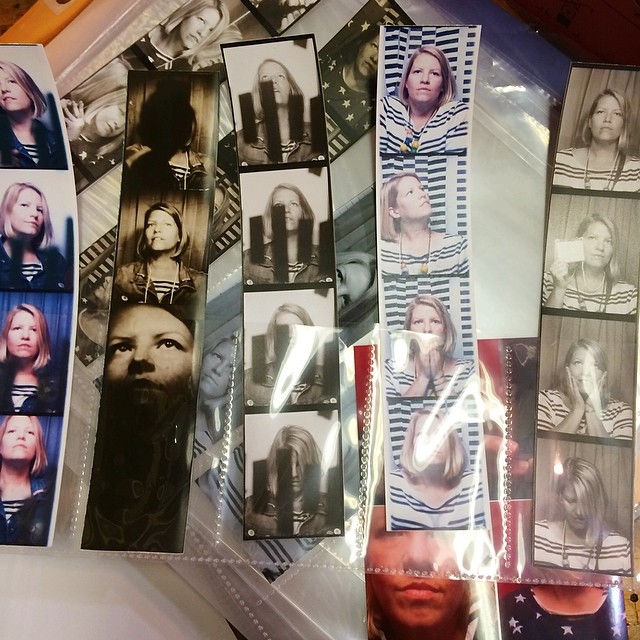 The convention cost $18 to the general public and I think I took over 20 strips home with me, so it was a great deal! I actually can’t believe that there weren’t tons more people there during the open booths time slots. Surprisingly though, the people that were there were from all over the country and world!

Meags provided us with packets with creative tools to use in the booths. My pictures might not all be amazingly creative BUT I’m not done yet! I have some ideas and I think I’d like to incorporate some of pictures into some mixed media and mailart. 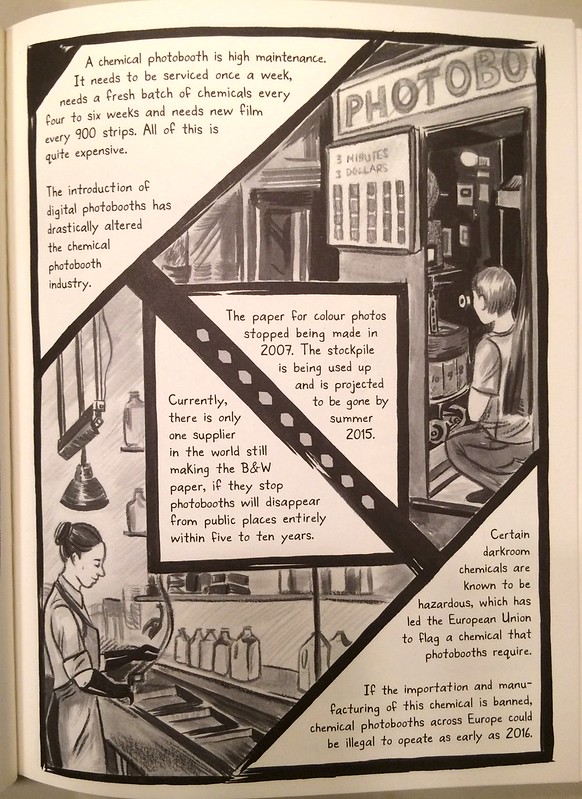 Overall it was a GREAT experience. Now that I have this under my belt and knowing what I know now, I think I’d be more comfortable attending a future convention. I also took with me a few mementos including Meags’ new graphic novel, Photobooth: a Biography. The book is great so far and I highly recommend it. The page above shocked me and just about made me cry. I had no idea that photobooths are so close to “extinction”.

SO, please, if you like chemical photobooths (as opposed to digital) please visit photobooth.net, search locations to find nearby photobooths and support them now while you can. 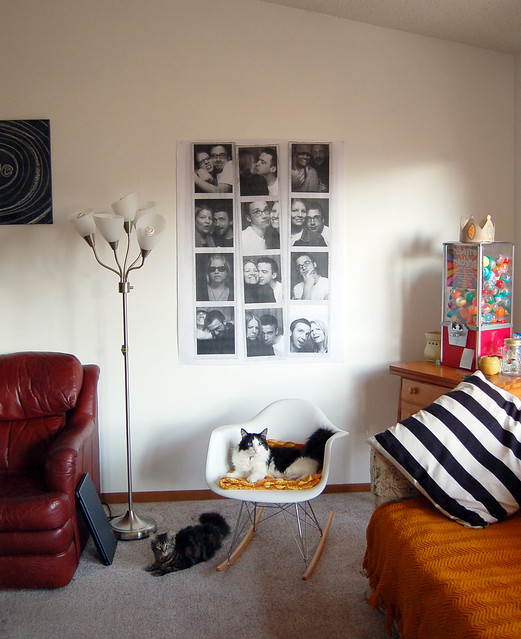 My photobooth poster DIY project from last year. Make your very own LARGE poster for only $5. It’s easy and FUN!